In case this hasn't become obvious yet, we at Basketbawful consider Greg Ostertag to be our official mascot. After all, the Phoenix Suns have The Gorilla, and the Lakers had "Dancing Barry" back in the day, so we selected the clunky white goofball most worthy of representing the public face of our sarcastic empire. Suffice to say, we chose wisely.

But what do we really know about Greg Ostertag, beyond his his on-court "contributions" (which include career averages of 4.8 points, 5.6 rebounds, and 0.6 assists)? Well, for one, we know he's a big-time game hunter and a regular visitor of the Texas Hunter Connection: 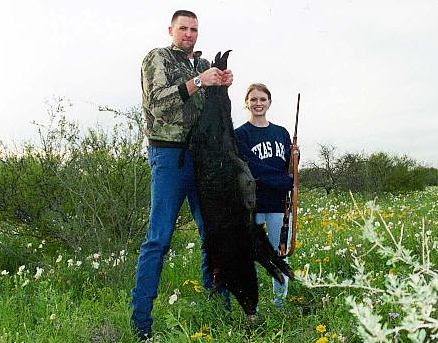 Either that's a wild boar in his hands, or he's very happy to see you.
We also know he likes to dance in public, wearing only his underwear no less (eyes...burning...). He actually has a profile on The Internet Movie Database because he played a big, goofy basketball player (quite a stretch, I know) named "Joe Sparks" in the Whoopi Goldberg disaster Eddie.

Greg's actually a surprisingly sensitive guy. In 2002, he donated a kidney to his younger sister, and then offered to act as a support group for Alonzo Mourning when he was suffering his kidney ailment. There's no word as of yet who he donated his basketball skills to.

He spent nine uninspired seasons with the Utah Jazz, single-handedly destroying any chance John Stockton and Karl Malone had of winning a championship. He signed with the Sacramento Kings for one season before he was inexplicably traded right back to the Jazz (hey, we all know that Jerry Sloan just missed the big lug).

We know he's kind of a wimp for someone who's 7'2" and almost 300 pounds. Shaq never misses a chance to rough Ostertag up, and even bitchslapped Greg before a shootaround a few years ago. Shaq showed little remorse, although he did later apologize...not to Ostertag though; he just said "sorry" to Lakers executive Vice-President Jerry West, General Manager Mitch Kupchak and Coach Del Harris. 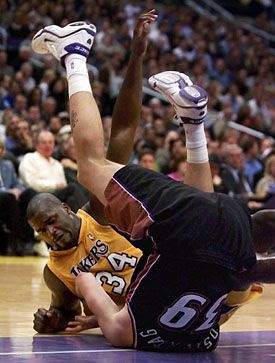 Shaq applies his finishing move,
which he calls "The Big Osterslam."
I doubt Greg will ever get any respect around the league. He even admitted that the Jazz rookies probably don't look to him for leadership. I think he's reached the point in his career that all crummy white centers reach, where he's just trying to stay in the league to continue collecting a paycheck before he has to move back to Duncanville, Texas and sell life insurance.

Ego-ectomatastic Extra: It's not just us. Greg Ostertag has become so synonymous with the term "posterization" that someone has actually painted pictures of Greg getting embarrassed on the court. And since seeing is believing, here's the proof: 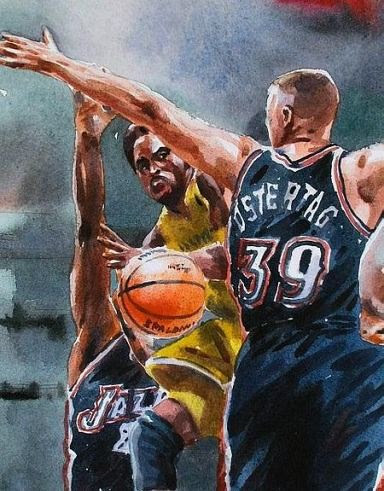 Koblob passes around Osterblob.
That's right. I said "paintings," as in plural. 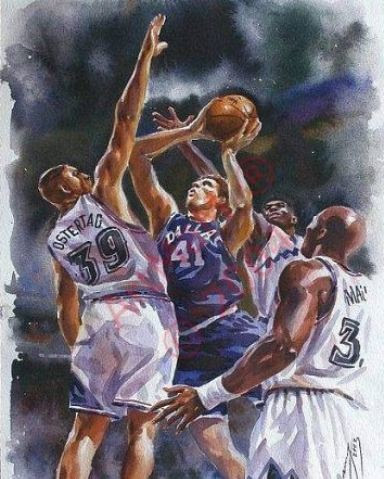