The reason I hate most basketball commentary is because most of the guys doing color are spineless pansies who are scared to death to say anything controversial for fear of losing their job. And by "controversial" I don't mean discussing devil worship or how good babies taste with a slight butter glaze. I'm talking about making simple-but-obvious observations. I'm talking about calling guys out when they suck.

And by the way, the commentators for local television stations don't count. Guys like Johnny "Red" Kerr and Tommy Heinsohn are in their own little plane of existance, and I'm more than happy to leave them there...raving silently but bitterly to themselves. I've already documented Heinsohn's creative insanity, and Kerr is good for at least 10 or 15 deranged comments a night. (My personal favorite is when Kerr screams that an opposing player just travelled, even when they're completely stationary. Or don't have the ball.)

The only man who consistently tells it like it is, straight up and with minimal retardation, is the "Round Mound of Retort" himself: Charles Barkley. 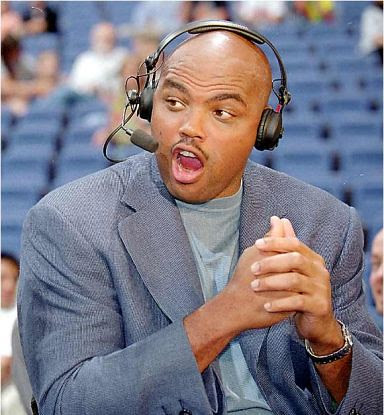 If his mouth is open, chances are you should be listening.
Now don't get me wrong. Charles can be as much of an idiot as anybody else. This is the same guy who once guaranteed that Yao Ming would never score as many as 19 points in a game, and that if Yao ever did notch 19, he, Charles, would kiss Kenny Smith's ass. Well, Yao promptly scored 20 points against the Lakers, and Charles ended up kissing a donkey's butt during a live TNT broadcast.

So the man isn't Stephen Hawking. In fact, he's not even Stephen Hawking's drool bib. But that's fine with me. I don't want Charles to advance the field of theoretical physics. I just want him to keep saying things like he said last night during halftime of the Lakers' 99-98 win over the Cleveland Cavaliers:

"Man, playing with Kobe Bryant, that would just suck!"

Keep in mind that Barkley has played with guys like Kurt Nimphius, Pete Meyers, and Manute Bol, so he is fully medically qualified to determine the exact level of crapitude that can result from playing basketball with someone. Even if that someone scores over 30 points a game, and particularly if that someone takes over 30 shots a game. You know, for example.

Charles is the E. F. Hutton of basketball analysts: if he's talking, you'd better listen. Otherwise, you're probably going to miss something special, whether it's an observation so obvious that even Helen Keller couldn't miss it (but nobody else has the guts to talk about), or a foot-in-the-mouth statement that destroys the Unintentional Comedy Scale (and there have been many). And since I'm in a giving mood, here's a short list of some classic Barkley-isms:

On Phil Jackson handing out books to his team: "He needs to give that team a Bible. Only God can help them. They're terrible."

On Cuttino Mobley: "He's instant offense...on both ends of the floor, I might add."

When asked by the judge if he had any regrets about throwing guy through a window in Orlando: "I regret we weren't on a higher floor."

On Shaq's weight: "He needs to learn the 2 words I tried to teach Oliver Miller...I'M FULL!"

On the Nazr Mohammed trade from the Knicks to the Spurs: "Isiah Thomas is building a championship team...too bad it's in San Antonio."

To Steve Kerr: "Hey Steve, no offense, but if you couldn't shoot, there would be no reason for you to be alive."

To Ernie Johnson, while discussing Ray Allen's complaints about Bruce Bowen: "It's called defense, Ernie. I wouldn't know anything about it, personally. But I've heard it through the grapevine."

On Shaq in Miami: "Everybody is automatically better when they play with Shaquille O'Neal. Look at it this way: We haven't heard anything from Devean George or Derek Fisher. Rick Fox retired. All those (Lakers) guys were good players, but they are not nearly as good without Shaquille. We didn't even know (Heat guard) Damon Jones was alive three months ago, and now he's leading the league in thee-point shooting because his man is camped in Shaquille O'Neal's lap."