Brian Scalabrine is in pain. And no, I don't mean the physical kind. You'd have to actually play to get injured, unless, of course, you're name is Rex Grossman. Anyway, Scalabrine is depressed because fans boo him for sucking.

Basically, he thinks the fans don't respect him (and he's right), but he really hopes they understand that "obviously I'm not trying to miss [my] shots." This must be a very comforting thought for Celtics fans everywhere. Hey guys, I know your team is 12-18 and sinking like a stone in the standings, but the overpaid guy at the end of your team's bench really isn't trying to miss shots. So, you know, lighten up already.

It probably doesn't help that Scalabrine signed a 30 million dollar contract with the C's in the offseason, gobbling up excess cash the team could have spent on "Atlantic Division Non-Champions" t-shirts next May. Fans tend to hate guys who get paid lots of money to cheer their teammates from the sideline and hand out Gatorade in team huddles. Just ask Austin Croshere.

Even team officials are throwing Brian under the bus. Doc Rivers would only say that Scalabrine needs to play better, and Danny Ainge, well, he won't even talk about him. But look on the bright side, Brian; the money's guaranteed and they can't trade you. And if that doesn't cheer you up, maybe this will: 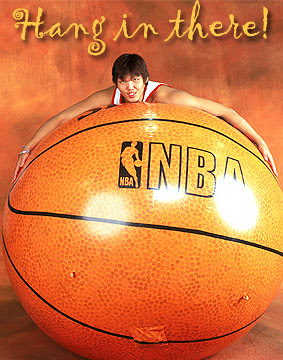 Word of the Day
Previous Posts
Christmas with the Butlers
Word of the Day: smother chicken
Grant Hill Furniture: breaking down in a store nea...
Jerome James should lay off the fatty foods
Quentin Richardson transformed into a cat
Word of the Day: fundamentivity
Von Wafer: delicious pastry or NBA rookie?
Word of the Day: ego-ectomy
Portland Trailblazer e-greeting cards!!
He's just shooting to make his teammates better