Wednesday, January 04, 2006
Grant Hill Furniture: breaking down in a store near you
By Basketbawful at 11:07 AM
6 comments

I just found out that Grant Hill apparently has his own line of children's furniture. 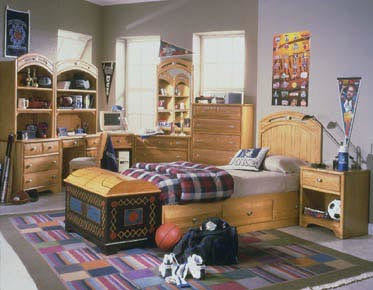 I know it looks good, but it's probably a death trap.
No offense to Grant -- because, seriously, I love the guy -- but I would never, ever, let a child stand, sit, or sleep anywhere near a piece of furniture with the words "Grant Hill" stamped on it. Because first of all, you're going to have to pay a lot for it. And second, let's face it: the thing may look good, it might even perform well for several years, but you know it's going to break down some day, probably at the worst possible time. And then you'll have a child's blood on your hands, you sadistic bastard. And forget trying to fix it. It'll keep breaking down anyway.

Speaking of Grant, he's now talking about retirement because -- get this -- he's concerned about getting injured. This is the same guy who already destroyed his ankle four or five times at last count and almost died from a staph infection after surgery...and now he's worried about injury?! You're finally healthy Grant. Friggin' enjoy it, dude.

Oh, and I guess you should've told your wife about the retirement thing.

Anonymous said...
My son has this furniture us to for over 10years and it is in perfect condition. Don't know if the person saying that it is going to break has evr seen the furniture other than on a picture, but Ican tell you that it is of extreme good quality and that it is worth evry penny.
4/01/2013 10:41 AM

Anonymous said...
My son has had his bed, desk, chair (hes to tall for now) and dresser for 12 plus years! and it still is i excellent condition! The comment is totally untrue....I have no reason to lie or even comment...but he's still Happy with it in fact Im looking for a larger set! that how i stumble on this untruth.....Very satisfied
9/09/2014 12:56 AM
Post a Comment
<< Home
Subscribe
RSS Feed
Mailing List