It's pretty hard to make a fashion statement when all you're allowed to wear are shoes, shorts, a tanktop, and cornrows...and that's exactly how David Stern likes it. But despite the commissioner's best efforts to fill the league with hundreds of bland and featureless body doubles, every few years a new fashion craze hits the NBA.

Some of the previous trends have been desperately needed innovations, like when Michael Jordan brought baggy shorts into vogue, saving us all from a decade of a Shaquille O'Neal crotch shots. Others were silly and, thankfully, short-lived, like back in the 80s when Magic Johnson and the Lakers starting wearing bike shorts under their normal short-shorts. Others have been terrifying beyond the capacity for rational thought, like when Rik Smits, Chris Mullin, and the rest of the Pacers shaved their heads en masse for the 1998 NBA Playoffs. The current trend definitely falls into that last "mind-numbing horror" category: full leg tights. 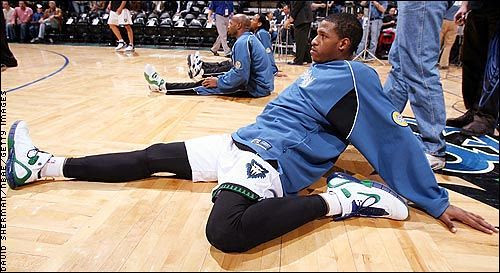 "We're men, manly men, we're men in tights, tights, tights..."
Not surprisingly, it appears that our favorite Basketbawful villain Kobe Bryant is responsible for starting this new style. I was hoping his little habit would be laughed off and quickly dismissed, you know, like his rape charges. But I was wrong...so very, very wrong. Everybody is starting to wear these godless monstrosities, from all-stars like Michael Redd (who's actually alternating between white tights at home and black on the road) to unknown bench jockeys like Rashad McCants (whom you didn't recognize above). The final straw for me was when I saw resident lardass and heart-patient Eddie Curry wearing them. Eddie Curry!! If the commish doesn't draft some kind of anti-tights legislation, and soon, I'm putting out a hit. 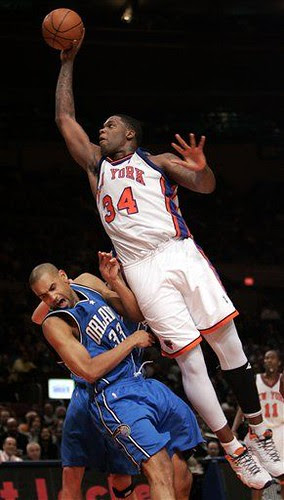 Word of the Day
Previous Posts
A real man's man.
Ouch, Lamar. Your words cut like a knife.
Ah, that coaching magic
God has spoken
"Oh yeah?! Well you cheated on your wife..."
A Stern admonishment
Basketbawful History: Sir Miss-A-Lot
Stockton 2.0
"I was just kiddin' guys..."
A most gratifying dump