The Detroit Pistons bid for the best start in NBA history was derailed seven games early, thanks to the 37-point drubbing put on them by the Dallas Mavericks.

I understand why sports writers need to get all excited about things like an 8-0 start, considering the fact that there are fewer than 10 NBA fans left in the country (or about two or three more fans than the NHL has). But seriously, I told you guys last week that you were wrong, that there was no way the Pistons would win their first 15 or 16 games. And thankfully, they proved me right in the most extreme way possible: by getting absolutely obliterated. Thank you Pistons. You can truly be basketbawful. 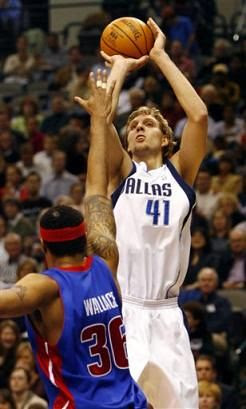 Word of the Day
Previous Posts
Jason Williams: Illustrating why kids should stay ...
Hey K.G., be a man. Tell us what you're really thi...
Kobe: Still basketbawful
Pistons are 7-0. I'm not impressed. Yet.
Another reason why I love Karl Malone
"It's not always a thumb..." -- Doug Collins on Mi...
Not so fresh and so clean
Gentiles can't jump
Things to buy if "Tattoos of the NBA" is sold out
Life imitates pro wrestling: case study #389308-B