A great exerpt from the book Sex Drugs and Cocoa Puffs: 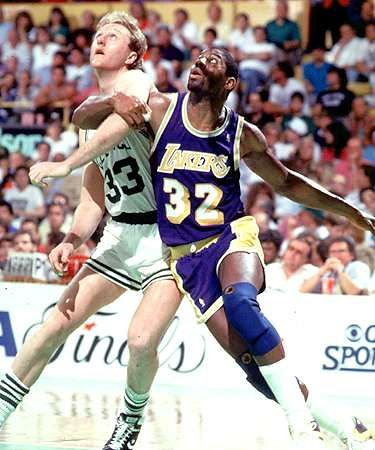 Time to choose a side.
Perhaps it seems the Lakers and Celtics represent everything in life simply because they represent the psychological war between black and white, the only things just about everybody in America can seem to understand. Perhaps the only reason I worshiped Larry Bird was because he was a God I could create in my own image.

But part of me knows this was really about Pop-Tarts. And about
Oswald. And about voting for Bob Dole.

So this is how I have come to make every decision in life: I suss out the Celtics and Lakers dynamic in any given scenario, and then I go with Larry. I'm a Celtic Person; for me, life is simple. And just in case you're blind to the abundantly obvious, here are ten examples of how you can construct a green and white humanity:

What kind of car should I drive?
If you're a Laker Person, buy a two-door car, preferably something made in America. I'd go with a Camaro IROC or possible a Ford Probe. These are fast, domestic vehicles, just as the "Showtime" automaton was a sleek, streamlined machine that came from the streets of Michigan (Which is where Magic was raised). Meanwhile, Celtic People are four-door sedan owners. I lean towards the Chrysler LeBaron and the Chevy Cavalier, the veritable D.J. and Ainge of the automotive universe.

Who should I marry?
If you're a Celtic Person, you should try to marry the most beautiful woman willing to sleep with you. In all likelihood, you are not attractive, Celtic Fan. Your haircut is ridiculous. You need to marry the equivalent of a model, lest your kids will most certainly be repulsive. It is the Celtic Way to find that middle ground between the beautiful (the rotation on Bird's release) and the ugly (i.e. Kevin McHale's skeletal structure). If you are a Laker Person, you need to marry the most understanding, forward-thinking, unconventional female you can possibly find. This is because (A) you will only enjoy a creative relationship, and (B) you will undoubtedly cheat on her, and probably with a hooker.

What should I have for breakfast?
There's sort of a gut reaction to insist that Celtic People should eat pancakes and bacon while they read the newspaper, but nobody does that except lumberjacks and maybe Mark Cuban. A Celtic Person eats cereal, but nothing bland; Cap'n Crunch or Frosted Flakes are the best options, because the empty sugar represents M.L. Carr and the ample riboflavin represents Scott Wedman (i.e. something that is good for you, even though you have no idea what it does). Laker People consume Kellogg's Pop Tarts, which heat up in a hurry - a lot like Bob McAdoo.

Who should I believe killed JFK?
Laker People side with the conspiracy that implicates the military-industrial complex, although they also suspect this is why nobody turned on the air conditioners during game 5 at the Garden in 1984. Celtic People thing Oswald acted alone and without justification, just like Philadelphia 76er Andrew Toney.

What should be my favorite sexual position?
I don't want to get too graphic, but here's a hint: Look at the way Danny Ainge shot his jumper. Then look at the way Jamaal Wilkes shot his. Enough said.

What kind of drugs should I take?
Remember the first game of Magic's career, when Kareem hit a skyhook at the buzzer against the Clippers and Johnson hugged him like a grizzly? The only people I know who behave like that are usually on Ecstasy. Meanwhile, Celtic People smoke pot, just like the Chief.

David Lee Roth or Sammy Hagar?
This is a tricky one, because Dave was the ultimate California boy and Sammy's heaviest solo record is titled "Standing Hampton" which I think is in New Hampshire (the Red Rocker also looks a bit like Bill Walton, sans headband). Yet upon further review, it's all too obvious: Celtic People are Roth People, because that's the original, definite incarnation of a classic stereotype. Laker People are Hagar People, because Sammy was in the band longer and ultimately sold more albums (just as L.A. ultimate won five titles to Boston's three, while Magic won 22 of his 37 head-to-head meetings with Bird). Hell, the Lakers weren't as cool, but they were better, you know?

Should capital punishment be legal?
Laker People say no, as Kareem is a human rights activist who would question the validity of any practice that essentially replicates the original crime. Celtic People say yes, because anybody who's ever looked into Larry Bird's eyes knows he's a killer.

Is Adam Sandler funny?
No.

What socially irresponsible rap music should I support?
According to N.W.A., life ain't nothin' but bitches and money. And James Worthy (arrested fro soliciting a Texas prostitute in 1990) would undoubtedly agree. Therefore, Laker People dig Ice Cube. Celtic People go with Eminem, the only white guy who can keep up.

Larry Bird and Magic Johnson were actually raised with paradoxical pathologies: Magic's middle class suburban upbringing was a traditional white experience, while Bird's impoverished, screwed-up childhood (his father committed suicide when Larry was 19) was most stereotypically black. Ironically, both men successfully represent
people who have absolutely nothing to do with them.

You don't need to side with the Boston Celtics to be a good person. But you should definitely side with someone. Either you're with us or you're against us, and both of those options are better than living without a soul.

Word of the Day
Previous Posts
Pistons: Not so perfect.
Jason Williams: Illustrating why kids should stay ...
Hey K.G., be a man. Tell us what you're really thi...
Kobe: Still basketbawful
Pistons are 7-0. I'm not impressed. Yet.
Another reason why I love Karl Malone
"It's not always a thumb..." -- Doug Collins on Mi...
Not so fresh and so clean
Gentiles can't jump
Things to buy if "Tattoos of the NBA" is sold out