In honor of the NCAA tournament, I present 1995 Rasheed Wallace doing what he does best
(Via Andy Gray's SI Vault)
Despite having so many terrible games last night, there were very few pictures that were funny or even mildly amusing. I suggest you go check out our earlier entry on the greatest arcade game ever to fill the void.

Also, as passed along by Basketbawful reader RRR, here's some more vintage man love of a different variety: 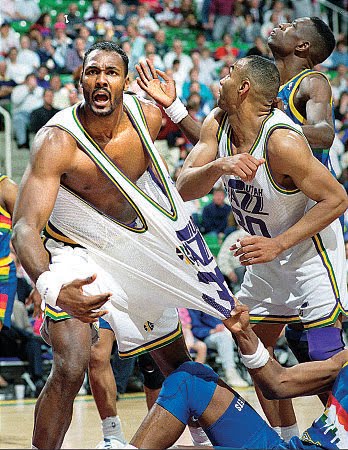 They can't help but want to take off his clothes and take a look at the Mailman's body
Worst of the Night in Pictures: Anyone else feel compelled to do Dave Chappelle's Lil' Jon routine?
Nationally Televised Games:
Nuggets at Celtics: The Celtics are starting a season high six game homestand. Considering they've won more games on the road than at home, this is unsettling. And that's just wrong.

Lakers at Spurs: Tim Duncan may be aging inexplicably quickly, but at least he isn't getting washed up as badly as Derek Fisher. So that's a plus.

All The Other Games:
Magic at Hawks: The Hawks need either one more win or a Chicago loss to clinch a postseason berth in the Eastern Conference. Just a hunch, but I think they'll be fine...

Wizards Generals Bullets at Pacers: The Pacers have won three straight games. What the hell?? They can't even tank right. Meanwhile, the Bullets haven't won in a dozen games. Their last win? It was against the Nyets. And as Bawful noted in the WOTN, a loss tonight would tie the franchise record for most consecutive losses. Goodness.

Jazz at Raptors: The Jazz have struggled from behind the three point line in road games recently. But in good news, treys are a lot easier when you don't have a hand in your face! Thanks, Craptors defense.

Timberwolves at Bobcats: Ah, the team with an even longer losing streak than the Bullets. Go help build some momentum for a playoff run, Charlotte.

: Oh no. Oh hell no. The Purple Paupers better not screw this up. Accuscore has the Nyets favored in this game even. I'm scared.

Crabs at Hornets: So, Cleveland signed Zydrunas Ilgauskas. And they waved Darnell "Lacktion" Jackson to sign him. Go to Hell, Crabs. (Wait a second, they're already in Cleveland. Redundant. My bad.)

76ers at Bucks: It's just plain scary when I caught myself watching the end of a Bucks game on NBA.com League Pass, and Bill Simmons wrote a running diary about that same game. Fear the John Salmons Era.

Rockets at Thunder: The Thunder are trying to avoid their first back-to-back home losses since mid-December. Think about that for a second. That's pretty impressive for a team this young and raw. (Oh, and coincidentally, the Thunder game was the other game I watched on Monday night, and also the other game Simmons wrote about in that above link. Spooky...)

Grizzlies at Warriors: I am definately looking forward to the Larry Ellison Era.

Nyets leading the purple paupers right now 70-61 at Brendan Byrne!!!! THIS CANNOT BE!

Gavin and friends, ever thought that associating with one of the Nyets' sponsors would bring bad tidings to the barnyard in Natomas? Gee.
3/24/2010 8:35 PM

chris said...
"They're playing free and easy right now." "It's more of a case of the Kings shooting themselves in the foot, because less than 32% shooting is what's got them in the hole."

Peaches: "The most frustrating thing about this game is, you only score 74 points against the Nets. That's going to be eating at Paul Westphal for the next few hours."

chris said...
Chris Quinn about to lack it up in the last 35 seconds, for what I THINK may be a guaranteed Mario for Kiki Vanderweghe.

It's bad when the Kings announcers mention that the Nyets took an intentional foul to set up what we call Mushroom Kingdom time. Yuck.

Omri Casspi with a garbage time bucket and the fans in the arena actually are more excited about that, than this win.

chris said...
Devin Harris taking an intentional foul to create a Mario situation...I don't even know where to begin.

AnacondaHL said...
Let me attempt to transcribe the post-3rd interview with Pops:

Bilingual dude (John Sutcliffe): Back in San Antonio with Coach Popovich, Coach, what have the Lakers been able to do in this 3rd quarter to get back in the game?
Pops: ...well they made three 3s. *awkward stare*
Bilingual (scrambling): ...and, also the importance of getting someone like Tim Duncan more involved in the last quarter, he only has six points...
Pops: He's involved. The ball's gotta go in. *glare, walks away disgruntled*
Bilingual: Eh, Coach Popovich, I don't think he's very happy, very contento, guys.
*Pops unhinges his jaw and breathes fire on Noche Latino*
3/24/2010 10:55 PM

chris said...
Wow, you know the atmosphere in the wake of losing to the Nyets is very, very bad when Omri Casspi's fanclub becomes the subject of discussion of the start of the post-game thread at Royalty, all because he was cheered for that meaningless layup.
3/25/2010 12:40 AM

chris said...
And the folks at Royalty are already dreading the skewering that our very own Matt McHale: Technical Writer is slated to offer:

Just because the truth hurts doesn't mean it isn't worth reading.
Besides, won’t be fair to enjoy the daily derision of the rest of the league only to turn a blind eye when the Kings earn the spotlight.