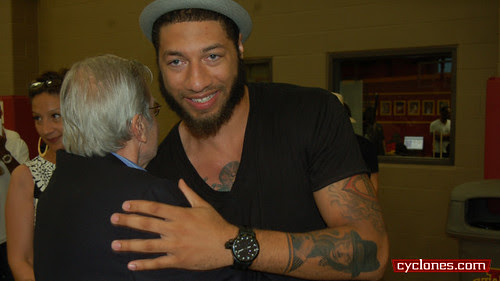 Fedora, check. Deep V, check. Inflated sense of self worth, check.
You all saw the mini documentary that followed him on draft day. He sat there and listened to his agent name off all teams that didn't want anything to do with him. Which was literally every team who had a pick. Every team except the Houston Rockets. Houston was taking a significant risk seeing as how White's fear of flying would require special arrangements be made on his behalf. Hiring a special physician to see to White's needs. Taking a team owned charter bus to and from certain cities. Perhaps not having him in the lineup for some games due to the distance from one city to the next. Perhaps not having him in the lineup simply because he wouldn't be able to overcome his condition that particular day. Why would a franchise that is largely in the business of making money off their players, go through the trouble? But Daryl Morey and the Rockets felt he could help their team. Royce White was taken 16th overall. Hugs were given. Tears were shed. And then shortly after, backs were stabbed.

Here is a brief rundown of events that lead to me angrily typing this piece.

Royce White needs to either hire a PR manager or fire his PR manager. Half of his douchebaggery flows from his twitter feed. Going on 140 character rants about how the Rockets front office hasn't made things "safe" for you doesn't help his cause. One can argue that the Rockets have gone out of their way to accommodate him. Mr. White has exhibited a classic case of diarrhea of the mouth. Yeah he can spout off some random facts about mental health. And he can make sweeping judgments and accusations about NBA front offices. But if he had the wisdom of a jar of mayonnaise he'd realize that trying to paint himself as some type of martyr doesn’t really work if you’re collecting over 1.6 million dollars while sitting on your ass. 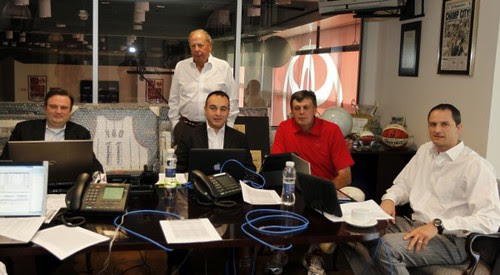 "You guys think we'll regret taking Royce?" "Nah, we're good."
I'd like to see his contract ripped to shreds and him left to fend for himself in the real world. But knowing Royce, he'll likely hire some snake of a lawyer and then try and sue the Rockets for discrimination. He's damaged his reputation so badly, that no team would ever want to draft a player with an anxiety disorder. If fact, he's probably done more harm than good for people living with mental health issues. I'm not sure of the exact course of action the Rockets can take, but it should be clear by now that they need to wash their hands of this guy.

Houston, its trash day. And you got a big ol' bag sitting in your garage that needs to be drug out to the curb. Its name is Royce White, and it’s starting to stink. #BeWell

Wormboy said...
Gonna agree with Anonymouses: not really behind this post. Is White kind of a nut? Sure. But about 1/10000th lower impact than Ron Artest has been. Not worth the effort.

Meanwhile, the best game of the regular season was played last night, with an ensuing whine-fest by Wade and LeBron. The game was anti-Bawful, and the whining was uber-Bawful.
3/28/2013 4:55 PM

Barry said...
Some bad PR work, that's for sure. It's hard for me to tell who's in the right here as an outsider, but there's definitely some communication issues between the Rockets and their employee.

Josh Slater said...
My first instinct here is to be a dick, but I am doing everything I can to avoid it. I say that so you understand that this is a reserved as I can be at the moment.

You are just as ignorant to the inner workings of the mental health team of the Houston Rockets as I am to the motivation behind this piece. I could assume that you're an apathetic, small-minded moron just like you have assumed that Royce White is the clear villain in all of this. Before you cast judgment, perhaps you would be better served by employing a little empathy. I make no assumptions about either party other than the Rockets are motivated by their own success the same that Royce White is motivated by his. They both want what is best for themselves. Mental health is unpredictable and unique to the patient. If you have as much experience with it as you say you do, you should be aware of that.
3/29/2013 7:09 PM

I have both generalized anxiety disorder and panic disorder. It/they has had a very negative effect on my well-being and also my career.

So I am both sympathetic and empathetic to those with anxiety disorder. Nevertheless, don't have a very good impression of Mr. White. At the least, the tone of his tweets etc make him look:
1) irrational (beyond the irrationality of anxiety disorder)
2) unnecessarily whiney and acerbic, not really interested in working out a mutually acceptable solution.

Early on I was rooting for the guy to make it and be able to play in the league. I still hope he does, simply for the sake of the public view of anxiety disorder, even though I can't stand Royce White.
3/30/2013 2:37 PM
Post a Comment
<< Home
Subscribe
RSS Feed
Mailing List