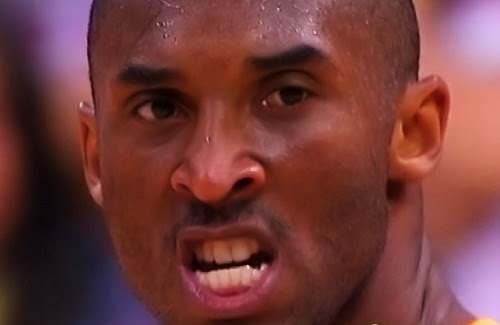 Through a source that shall go unnamed, we at Basketbawful have obtained a copy of the transcript of the players only meeting of the Los Angeles Lakers after their 106-93 loss to the Memphis Grizzlies. We warn you, some of the language is coarse and may be found offensive.

Nash: Hey does anyone know what this is about?

Jamison: I don't know, Kobe just called a meeting as we were walking off the floor.

Nash: Great. Now we have to hear about how he isn't getting enough shots.

Kobe: Mikey, Mikey, for the last time, this is a players only meeting, now go to your office and comb your mustache a few more times.

Kobe: Ummm...Didn’t I tell you guys that once Mamba enters the room, you are all to stand and say "Praise the Almighty Mamba in all his glory"?

(All players stand to their feet): Praise the Almighty Mamba in all his glory...

Kobe: Alright now everybody shut the hell up...Now so this doesn't get out of hand, in order to say something, you must be holding this basketball. Once you're done, pass it to someone else so that they can be allowed to speak.

Gasol: (Under his breath) I guess that means no one else will be speaking.

Kobe: What was that Pau?

(Kobe Glares around the room)

Kobe: You there...The one with the dreads. What’s your name? Gordon? Gordon Gill?

Kobe: Whatever. What’s your problem...You haven't grabbed a rebound or passed me the ball in  two weeks.

Hill: Erm...I mean. Mamba, I'm out for the season with a hip injury. I just had surgery.

Kobe: With all due respect Gordon...Fuck your hip. One time, my hip got dislocated in the middle of a game. Did you know that? NO. You didn't know that because Mamba popped that shit back in place and dropped 40 points all without crying about in the media like a little BITCH...

(Hill bows his head in shame. A single tear rolls down his cheek)

Kobe: Hey, Metta World Sissy. Can I please speak to Ron Artest? Is he in there? Because I need crazy Artest to come back. I need you to elbow someone. Body slam a ref. Drop kick a fan, SOMETHING.

World Peace: But Mamba, David Stern told me if I step outta line again I'll be washing dishes back in Queens faster than I can release my next shitty rap song.

Kobe: Don't worry about that. I'll call him up and talk to him for you. Besides, he owes me a favor for screwing up that Chris Paul trade last year. Just make sure someone leaves the court seriously crippled the next time we play.

Kobe: And speaking of crippled. Dwight, What the hell is wrong now? You left the game in second quarter and didn't come back.

Howard: Mamba, It’s my shoulder. I planned on coming back but then on the way down the tunnel I changed my mind. Then I sat at my locker for a few minutes and decided to give it a try. But as I stood up, I felt that it would be best not risk it. So after a while, I told the trainer I was ok and felt that my team needed me. But then all of the sudden I got this feeling that I shouldn't go back out. During the fourth I have finally made up my mind that a champion should just push through the pain. But by then the game was already over.

Kobe: Dwight, You've got to want to be great. Ever since you came here its "Ohh, My shoulder hurts, Ohh, My spinal cord hurts." Yeah my shoulders and back are sore too from carrying Shaq's fat ass to three championships.
Sacre: Uh...I-I'd like to say something.

Kobe: Did I give you permission to speak? Go fetch Mamba a Gatorade...And it better be orange flavor.

(Sacre shuffles off to the other room)

Kobe: Stevie. I'm disappointed in you. D'Antoni is your coach. You promised me he knew what he was doing. I expected you to shine under this system. So far the only think that shines around here are your suits. You went from badass rock star point guard to a slick up hairstyle having douche bag in one night.

Nash: It’s not my fault Mamba. I'm new here and I just want everyone to feel comfortable. I try to spread the ball around but I can’t work miracles. The other night we had Earl Clark getting major minutes...EARL CLARK. No offense Earl.

Kobe: If D'Antoni screws this up, I'm holding you personally responsible. Until then, no more shopping for you. You got enough shiny suits in your wardrobe to last an entire Kings of Comedy tour.

Sacre: Here's your Gatorade sir. Did I do good Mamba?

(Kobe takes a sip and immediately spits it all over Sacre's shoes. He then slaps him across the face)

Kobe: THIS IS WARM!!! Ya see, This is the shit I'm talking about. How can Mamba expect to match Jordan's 6 rings when his teammates can't even think to make sure the Gatorade is cold. You think Steve Kerr ever brought Jordan warm Gatorade?!?!

Kobe: What say you, Big Bird. (pointing towards Gasol)

Gasol: What do you mean? I've been playing out of position for almost three seasons now. I'm a center and everyone keeps making me play power forward and shoot long jumpers. I can't....

Kobe: Ya see there...You just said "I can't". Mamba doesn't believe in things like "can't", or "won't" or "I don't want to sleep with you". You're Spanish. That means your ancestors were Conquistadors. You should be raping and pillaging that area under the basket known as the paint.

Kobe: Ok, well that’s our time. It was a very productive meeting. Now everyone go to the practice gym and work on various forms of passes you can make to me during a game. Let’s see some creativity people.