“The first thing you notice about New Orleans are the burying grounds - the cemeteries - and they're a cold proposition, one of the best things there are here. Going by, you try to be as quiet as possible, better to let them sleep. Greek, Roman, sepulchers- palatial mausoleums made to order, phantomesque, signs and symbols of hidden decay - ghosts of women and men who have sinned and who've died and are now living in tombs. The past doesn't pass away so quickly here. You could be dead for a long time” - Bob Dylan

"The past doesn't pass away so quickly here. You could be dead for a long time” For all thirty five New Orleans Hornets fans, Mr. Dylan speaks the chilling truth. The departure of Chris Paul left the Hornets with a chasm of unquenchable bawfulness. However when news came that Eric Gordon would be sent to New Orleans as part of the swap, a glimmer of hope shinned down upon Big Easy. Gordon, the explosive shooting guard, was one of the league best up and coming stars. This bashful baller had just completed a season where he averaged 22.3 ppg and 4.4 ast. After playing in just two of the first six games, Gordon would go on to miss nearly three straight months with an injured right knee. During this span, the Hornets new franchise player would be none other than...Chris Kaman...No, Carl Landry?...Nah...Errmm.... AH. Jarret Jack. 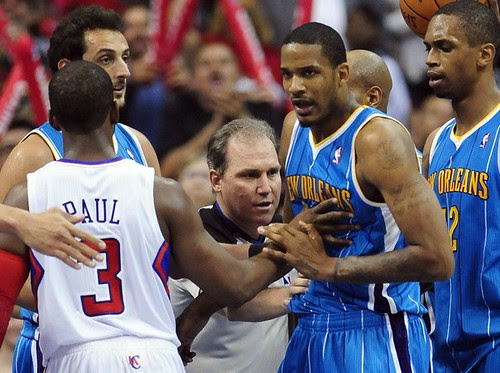 I almost felt sorry for the Hornets this past season. At 89.6 points per contest their offensive futility was only trumped by the Charlotte Bobcats. They were a scrappy bunch, but that only amounted to a last place finish in the Western Conference. If I didn’t know better, I’d say the Hornets pretty much threw in the towel right after Eric Gordon went down with his long term injury. I suspicious person may think that they weren’t putting forth their best effort in order to secure the number 1 pick. A cynical bastard may even think that Chris Kaman was shut down for a large portion of the season in order to suck on purpose. But I’m not saying those things. I’m just pointing out what some people may be thinking……. 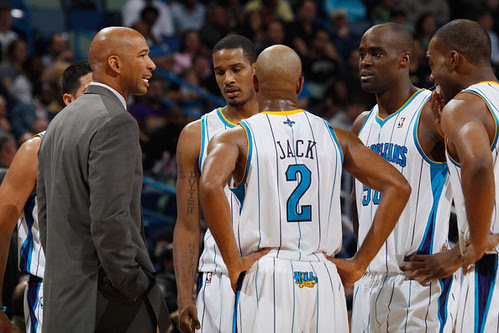 I'm just gonna move my mouth and make it look like I'm coaching. I just need you guys to stare at me and nod.

The season ended, and Hornets GM Dell Demps went right to work. In June he traded Emeka Okafur and Trevor Ariza to the Wizards for Rashard Lewis and a second round pick. Ten days later they bought out that monstrosity of a contract for $14 million, which ended up saving New Orleans about $9 million dollars. Demps also matched the $58 million dollar offer sheet on Eric Gordon. $14.5 million dollars per year is a lot of cheese for a guy whose body may or may not be made of rice paper. I like Gordon, but I wouldn’t be surprised if all the Hornets got from him were Joe Johnson like results. Their last major free agent signing came with the addition of Ryan Anderson. After putting up 16 and 7, Demps locked up the Most Improved Player for about $34 million dollars. 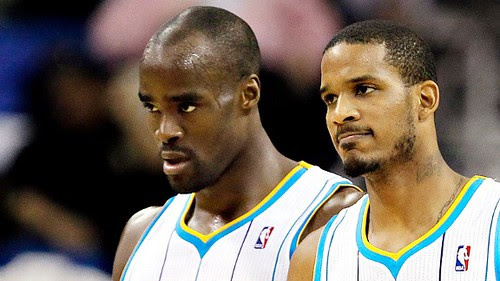 Its OK. I hear the cherry blossoms in DC are breathtaking.

Remember when I suggested that some people may think that the Hornets threw the season? Well, it paid off. New owner Tom Benson was as happy as a clam when he watched his team grab the number 1 pick in the draft. Predictably, New Orleans selected Kentucky’s Anthony Davis. Davis was absolutely dominant in his lone season as a Wildcat. The Hornets are getting a guy who will be a total force on defense. I watched him shut down post players and then step out on the perimeter and strip point guards. Think Kevin Garnett with more mobility. With the tenth pick, the Hornets took Duke’s Austin Rivers. I’m not sure if I’ve ever seen a guy come into the league and be hated as much as this kid. He’s got the prima donna label spot welded on his forehead for now. He’s supposed to play point guard it seems. If that’s the case then he’s already set up for failure. Rivers obviously has a score first mentality. Adding him next to Gordon, who isn’t exactly known as passer will probably lead to a lot of frustration on Monty Williams’ part. 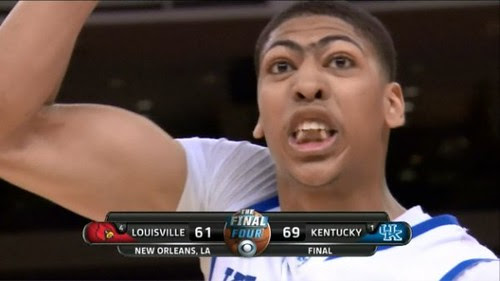 Kaman's league leading Ugly Per Minute Rating is in danger.

Davis and Rivers are nice additions. Robin Lopez should help beef up the post. And perhaps Anderson can continue playing well like he did the last season. The Hornets should be an entertaining group, but I wouldn't expect too many wins. Personally, I'm most looking forward to the eventual Rivers coaching clash and the ensuing fallout. What can I say? I love drama.

RipTheJacker said...
Sorry but if you watched the Hornets last year you'd know that most games they lost were only by several points and they played to win. It's hard to win a game when your go to scorer is Jarret Jack. And Monty Williams is a good coach, you are are mistaken about that as well.

Michael Hsu said...
Hey man Carl Landry is a solid player I hope Chicago can somehow get him.

Wormboy said...
"You said we were in this together."

I'm with Joko. The Hornets ain't staying, and some internet billionaire in Seattle will buy them. In fact, I'm thinking that the nonprofit Bill and Melinda Gates Foundation takes them on as a project in their ongoing battle against bawfulness and unibrows.
9/16/2012 7:21 PM