Greatness was a birthright for OJ Mayo. He began his basketball career by playing for the varsity squad at Rose Hill Christian High School where he averaged 23.1 points per game...He was also in the seventh grade. After moving to Cincinnati to live with his grandfather, OJ went on to earn the title Mr. Basketball of Ohio. He appeared on several magazine covers and Dime Magazine even crowned him "The Next Lebron". He later moved on to Huntington High School in West Virginia were he along with Patrick Patterson would lead the team to the State Championship. After signing his letter of intent to USC, Mayo scored a 29 on his ACT. OJ Mayo won high school. 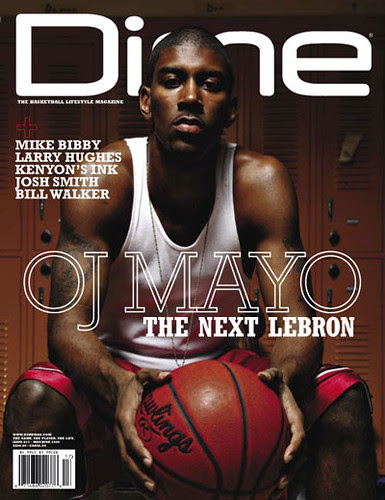 Next Lebron? So he’s gonna start balding at 23?
Side Note: That’s right, another Lebron bald joke. Deal with it.

After leaving USC in a wake of fire and destruction, Mayo was selected 3rd in the NBA draft by the Minnesota Timberwolves. OJ plus some rag tag spares were then traded to the Memphis Grizzlies for Kevin Love featuring some more rag tag spares. In his rookie season, OJ started every game playing 38 minutes a contest. He averaged 18.5 ppg 3.8 rebounds, 3.2 assist and shot 38% from three. He was the runner up to Derrick Rose in Rookie of the Year voting. By the end of the season it appeared that David Khan had been outsmarted...yet again. Ovinton J'Anthony followed his strong rookie campaign with averages of 17.5 points, 3.8 rebounds, and 3.0 assist. His career was off to a great start. Perhaps not "Next Lebron" great, but still very good.

The arrival of Tony Allen meant the Grizzlies would be getting the NBA equivalent of a honey badger in their back court. Allen’s defense on the perimeter added an element that was sorely lacking from the Grizzlies. By Mayo’s third season he had lost his starting job. Lionel Hollins envisioned Mayo as a Jason Terry like 6th man who would come off the bench and be instant offense. However, it was obvious that he struggled with this new role. His shooting percentage saw a decline from 45% down to a dismal 40%. Future Bron was now only scoring 11.6 ppg. Fun fact: In the 2010-2011 season OJ Mayo went scoreless 4 times. Also, he scored 6 points or less 18 times. None of which can top the embarrassment of having your ass kicked by the guy taking your minutes. That’s what happened in January of 2011. While on the team plane, Allen apparently ordered Mayo to pay his debt from a card game, but Mayo refused. Mayo then began to berate Allen. And then Allen did what any bad ass would do in that situation. Kick the shit out of the shit talker.

Ass kicked and I’ll assume passed out on the floor and pockets rummaged through: check 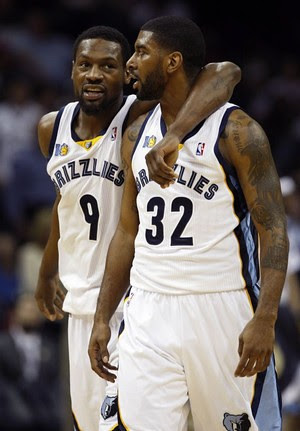 If this were the TV show Oz, Allen would be Schillinger and Mayo would be Beecher

Last season Mayo was thoroughly relegated to 6th man duty. After starting 17 games the previous season, he started zero games this go around. He managed to improve his scoring from 11.6 to 12.3 points per game. The Grizzles went 41-25 in the lockout shortened season and where matched up against the Clippers in the Playoffs. There is no way to sugar coat it. OJ Mayo was downright atrocious. After shooting 31% for 6 games, Mayo went 1-11 in game 7. SMFH. 1-11 equals 9% from the floor. NINE PERCENT. With that, Mayo punched his ticket out of town. The Grizzlies declined to sign him to an offer sheet and Mayo became an unrestricted free agent 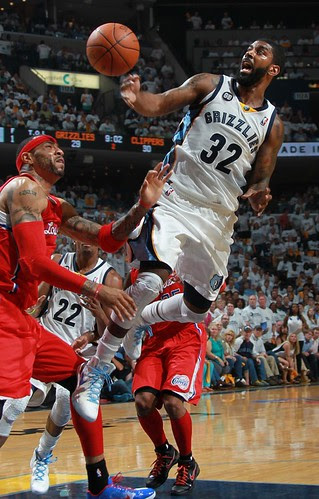 
This past July, Mayo signed a 2 year 8.5 million dollar contract with the Dallas Mavericks. The second year being a player option. The way this contract is set up tells me that OJ sees himself as a player who is worth much more that what he’s currently playing for. With what is basically a 1 year deal, he gives himself a chance to sign a large contract next summer. The Mavs need for a reliable second option in the wake of Jason Terry’s departure, gives Mayo the opportunity to shine in the starting role he once thrived in. So far as the number 3 pick, OJ has been a bit of a failure. I however feel it may be a little too early to label him a bust. Mayo is at a bit of a crossroads in his career. Going into his fifth season he hasn’t been able to establish what he may become as a professional. This upcoming season could potentially make or break his legacy.

Wormboy said...
Honey Badger? Never heard of it. Then I found this. I now very much heart honey badgers.

JJ said...
Ahhh Mayo. I do remember the days when his name meant a potential future All-Star. Great recap of his career thus far. And I do agree it's a little early to write him off though I expect his "rise" will only consist of some increase in scoring, not much else. I think the bench role really affected him badly. At least he handled the bench role a little better than another scoring-oriented former Grizzly, named A.I.
8/07/2012 10:04 AM

Czernobog said...
Did anyone catch France vs Spain? The last four minutes made the Basketbawful Null-Star games look like the epitome of offensive efficiency.

"It is primarily a carnivorous species and has few natural predators because of its thick skin and ferocious defensive abilities."

Czernobog said...
The Honey Badger is a genuine super-predator. It has no real natural enemies. Equating Allen to that is a stretch.

Paul Putz said...
I'm all in on Tony Allen = Honey Badger. Partly because I'm glad someone besides that annoying LSU football player gets to have the nickname.
8/08/2012 11:44 PM

How can followers of this site be so slow on the honeybadger uptake? That shit is like 2+ years old.

Nice post. I fondly recall my (always) respectful discourse with a certain former commenter on this site whose namesake rhymes with "Bananacondahl." He was of the opinion that Love for Mayo was a bad deal for Kahn. I was not so sure. I reasoned that Bigs need time to develop in the NBA; smalls are what they are when they arrive. The reason is: a team will take a chance on a big guy who is "raw" but has the body to play NBA ball ("you can't teach 7 feet"). OTOH, If you are small, you better know how to play already, otherwise you are utterly replaceable.

Love is perfect example of a big who needed time to develop, and develop he did. Looking back on his rookie season, I never expected him to become a 3-pt shooter. Now, that's one of his best shots. I thought he topped out in 2011, but he was even better in 2012, thanks to Rubio, and despite sharing the paint with surprising Pekovic. It appears the only thing that might slow Love down moving forward is injury- after all, he weighs a lot. I'm just sayin it could happen...

Mayo can probably still be that 18ppg guy he was his rookie season. Carlisle is not afraid to use small guards in his rotations, and he showed us in 2011 that no coach is better at using the bench for match-ups. I expect O.J. to see plenty of action. IMHO he's a slightly larger/better JJ Barea, and if JJ could find a meaningful role on Dallas, expect OJ to do much more.

JJ said...
AK Dave, I wouldn't worry too much about Love getting hurt. It could happen, but it's unlikely since he has a ground-based game (read: he barely gets off the ground). And I thought he lost some weight? Anyway, Love did develop very nicely. I'm actually excited to see how Timberpups will do next year.

By the way, whatever happened to "Bananacondahl"? I remember him being more than a commenter and contributing regularly. I guess around here people just go *poof* one day when they feel like it? Not that there's anything wrong with that when it's voluntary.
8/09/2012 12:05 PM

Anonymous said...
I really like the direction this blog is going. I would prefer some more articles like this over the daily grind of the WotN once the season starts. Don't get me wrong, WotN was entertaining as well, but there's only so much basketbawful happening a night. I think reducing the WotN and mixing it up with some articles from different authors like this could really keep this blog fresh.

AK Dave said...
JJ: True- He was an occasional contributor. And a good one too. I just remember him more for his comments I suppose.

Wormboy said...
Howard to LaLaLand! Now I truly have no trouble continuing to hate on the Lakers. I may (MAY!) even be able to bring myself to hate on Nash.