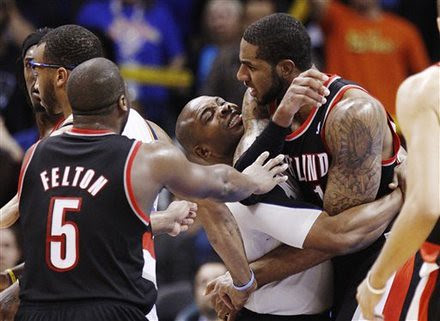 This ref is enjoying restraining LaMarcus Aldridge a little too much

Let's start things off with some required reading for the kind of people who read this blog: "Jay Caspian Kang takes a look at Kwame Brown, basketball player, and Kwame Brown, symbol of failure." I don't know about you, but seeing stories about guys like Kwame Brown makes me excited like a puppy getting a new chew toy.

Also, I am disappointed I didn't catch this sooner (thanks Batmanu): Shelden Williams hit himself in the face with the ball on a dunk. And it is one of the greatest pictures I've seen in ages. I want to shake that photographer's hand. 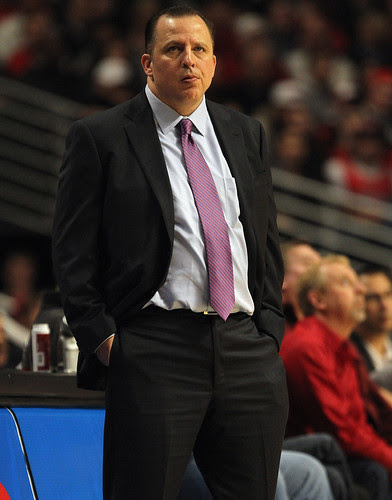 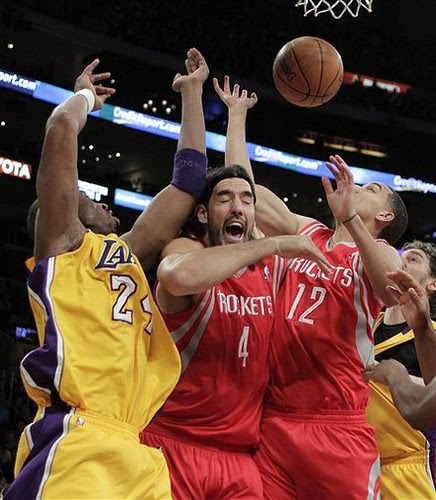 Damnit Scola, that "breathe through your eyelids" thing from Bull Durham doesn't work in real life! 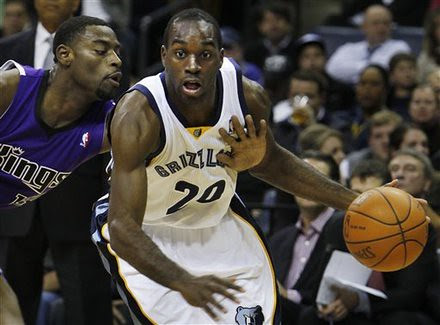 Wizards Generals at Magic, NBA TV, 7:00pm: John Wall, star point guard, is going through some hard times and shooting 31.7% from the field and averaging 4.4 turnovers per game. In others news, the Generals are 0-5 this season.

(Yes, I found a reason to link to that song just because I'm listening to that album right now and love the hell out of this song. Deal with it.)

Rockets at Clippers, NBA TV, 10:30pm: The Rockets defense is... how shall I put this... less than idea. They are allowing the other team to shoot a league-high 48.3% from the field. Coach Kevin McHale, ladies and gentlemen!

Cavaliers at Craptors, 7:00pm: Cleveland has a legitimate shot to win three straight games. Should I start worrying about the impending apocalypse?

Nyets at Celtics, 7:30pm: No Deron Williams. No Kris Humphries. Well then. This promises to be as awful as Work It. Or at least close because Work It is staggeringly bad.

Bulls at Pistons, 7:30pm: I got home last night just in time to watch the final four minutes of the Bulls game. Sounds like that was probably for the best.

Pacers at Heat, 7:30pm: Fair warning: Dwyane Wade is a game-time decision. This game might be more interesting than you think.

Bobcraps at Knicks, 7:30pm: First, make sure you check out this link poking fun at a fantastic typo: "Baron Davis recovering from the worst injury in NBA history." But then also go read this Sebastian Pruiti piece on Amar'e Stoudemire. Good stuff from one of the great NBA X's-and-O's writers.

Oh, and breaking news: DeSagana Diop is not very good at basketball.

76ers at Hornets, 8:00pm: Ready for some interesting stats? The Sixers are 2nd in points per game, and 9th in points against per game. They have a team shooting percentage of 48.3% which is pretty friggin' good. But they only have a 2-2 record.

Grizzlies at Timberwolves, 8:00pm: Z-Bo is out for up to two months with a torn MCL. Just think... a few years ago this would have been a blessing in disguise. Now it's actually a serious issue for the team (and they've had to trade for Marresse Speights to fill the roster hole). We live in strange times, my friends. Strange times.

Suns at Mavericks, 8:30pm: Stockton brought up an interesting point in the WOTN comments: "Is Steve Nash a respectable professional or just a dumb guy?" Yes, you have to admire his good-guy attitude of not bitching and moaning and demanding a trade every time the Suns got cheap and did something stupid with their roster. But on the other hand, have you seen the Phoenix roster outside of Steve Nash lately???

Warriors at Spurs, 8:30pm: Manu Ginobili's hand injury is... not good. The expected return timetable is at least two months. BRB, gonna pour one out for the dead Spurs dynasty.

Wormboy said...
That Kang article is excellent, and the Woody Allen quote cracked me up. However, if one looks at it from the economics point of view, John Maynard Keynes was arguably the smartest economic mind of the century (though no babe magnet). Just sayin'.
1/04/2012 6:16 PM

Naz said...
That article about Kwame Brown was great and I think everyone should read it. I really don't have anything to say about it other than "wow", and also that I'm going to stop making fun of Kwame Brown now.
1/05/2012 12:34 AM

Adrià said...
Amazing article about Brown. It seems every life has its own mediocrity, even public-made lives, but also our own lives. Good way to remember where to keep the difference between making fun of someone and making fun of what this someone does.