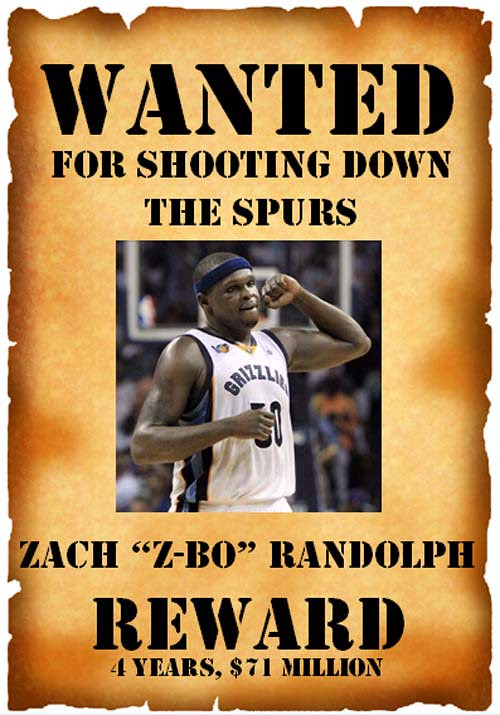 Interstate08 said...
I never thought I'd actually be looking forward to watching the Memphis Grizzlies in the playoffs. God damn Z-bo.
5/01/2011 3:36 AM

I've been a Z-Bo defender for years. Thought he was a well above average hoops player that could help teams win, and a misunderstood but good-hearted kid from a lousy upbringing.

Wormboy said...
Yeah, gotta say that Z-Bo came up big against the Spurs. It's easy to blame him for the fiasco in NY, but that's primarily Isaiah's fault. Z-Bo clearly has done well in a more structured environment.
5/01/2011 11:25 AM

Omedee said...
No break for Memphis it seems. Oh well.

Also, this afternoon the two darkest forces in the NBA meetup for an epic showdown. I hope the Heat make a good show, otherwise this series will be all hype.

Karc said...
Westbrook's blown 6 layups. But the last one was my favorite, because Mike Tirico called it his sixth "poop in the paint." I'm still laughing.

Good for Memphis to stick it to the schedule makers. Yeah, everyone wants LAL-OKC in the conference finals. I don't. This makes me happy.
5/01/2011 2:32 PM

Paul said...
Everybody in the league has to be ringing Chris Wallace's phone hard right now. Stealing Marc Gasol should be easier than stealing Pau.
5/01/2011 2:40 PM

Karc said...
Delonte West is playing like the only reason he joined the Celtics was to get another round with LeBron's mom.
5/01/2011 3:24 PM

Anonymous said...
Holy shit, Lionel Hollins is a great coach. Out-coached Pop in the first round, great rotations, good timeouts. Scott Brooks, Coach of the Year last season, is looking rather terrible, even though it has only been one game. I think the reason for the 'Coach of the Year curse' is that it is usually given to the coach whose team has exceeded expectations the most, even though the coaches may have some glaring deficiencies in their coaching. The high jump in wins can be usually credited to the massive leaps made by players; not neccessarily because of the coach. Brooks' offensive gameplan seems to revolve around having Durant run through a couple of screens, get the ball to him and let him do his thing and maybe have Ibaka clean the O-glass. If that fails and the defender manages to stick to Durant, the play goes to hell and Westbrook is free to do whatever he wants to do with the ball. Not what I'd call good coaching. The year before that, Mike Brown won COTY. I can only say 'LOL!!' about that. This year, it looks like Thibby is winning the award, yet he has some..uhh... offensive limitations in his system as of yet, I think. If I had had a vote, it would've gone to Pop, the team didn't add any new big pieces, unless you can call Gary Neal and Spiltter big pieces, which you can't. Pushing your guys to their limits, motivating them, good schemes is what COTY should be about, not the summertime improvement of young, potential-loaded players with desire to be the best.
5/01/2011 4:30 PM

Anonymous said...
Bosh is on pace for another Single-Double!

The Nightbringer said...
Pierce gets ejected, and the Heat pick up the W.

Karc said...
I'm sure everyone going to give Ed Malloy hell for throwing out Pierce, but let's face it, the fail was on Pierce. He had just picked up a T less than a minute before for going into James Jones' face (which is stupid, even though Jones was shooting lights out, he a threat to no one). So Wade fouls him, and he proceeds to scream in Wade's face right in front of the ref who gave him the first technical. That's like a classic 'Sheed meltdown.
5/01/2011 6:41 PM

The Other Chris said...
Notes on the Boston/Miami game:

- Boston's game plan of "Hey! James Jones is a really good shooter when he's set and open! Let's give him a whole bunch of really, really open shots!"... ummm...

Shoddy, shoddy rotations. If you're not going to rotate properly, then just put someone on him, and tell them not to leave, and play four-on-four. If the Heat have Joel Anthony on the floor, they're playing 3 on 4 anyways. Speaking of which..

- Has Zydrunas Ilgauskas been declared legally dead yet? Sweet Mary mother of God is he useless out there. Is Eric Spolestra mentally retarded? Does he owe a favour to the Lithuanian mafia? Why on earth is that corpse-like statue seeing a second of floor time?

Maybe it's another Weekend at Bernie's sequel. He actually died during the regular season, but they're slapping a jersey on him and seeing if they can convince 20,000 people he's still alive!! So far... they're failing.

We all know Joel Anthony is offensively limited, but at least he gives you lock down defense, shot blocking, all-world hustle and rebounding, etc. What is Big Z giving the Heat? The foul stench of death.

- Paul Pierce's offensive plan in the first half of "dribble the ball off of yourself for Miami baskets the other way" is probably not what Boston needs.

- Reffing schmeffing. There were bad calls both ways. (Including, of course, Pierce's ejection). Boston lost because they played like a bag of ass for most of the game. No defense and not a whole lot in the way of offense, until Truth and Jesus Shuttleworth started to resemble giant balls of fire.

- Garnett's man-style rejection of the Boshstrich was fucking AWESOME. Eat it Rupaul!

- LeBron's block on Rondo on the break... ditto. I'm surprised the backboard didn't shatter with the force of that one.

- Ray Allen has the elixir of youth and I want some.

- D-Wade is still a beast. Who on earth was saying this season that he's "done"? Huh?

- Boston played genuinely terrible for a lot of the game and were still in striking distance for much of it. If they can get a hand in the mug of James Jones and stop sending four guys at the ball every time 'Bron or Wade touches it.. Gonna be a hell of a series.

- Why the fuck can't Hubie Brown be announcing these games? Now what you have is the fact that three turds that are doing it aren't nearly as entertaining as he is, OK? Now, you love the fact that he's still going at the age of 1,976 or however old he is. But you need him doing the Boston-Miami game.

AK Dave said...
Pierce could have gotten himself in big trouble for his "face-rub" on James Jones. I think the second "T" was a make-up tech. He should have known he was on a short leash after the ref stepped in and bailed him out the first time. Why did Jones get a tech at all? All he did was stand still and let Pierce give him a kiss on the cheek.

Anyway, in a vacuum, that second T against Pierce was BS, but looking at the totality of the circumstances, Pierce can't complain.

Still: D-Whistle was in full effect, drawing fouls whenever anyone came close to him, Boston couldn't buy a call, everyone except Ray Allen played like crap, Pierce gets ejected... really its amazing that the C's kept cutting it to 7 or 8 late in the 4th.

Everything went right for MIA and everything went wrong for BOS and they still only won by 9 at home. And lets face it: Game 1 was must-win for MIA.