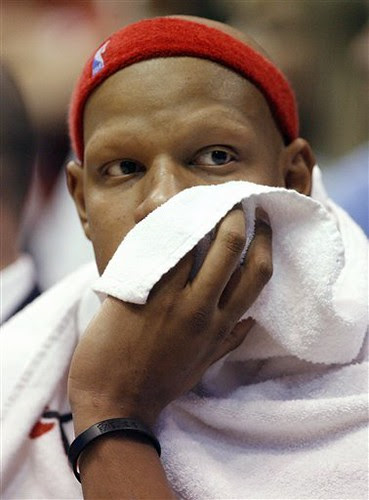 Detroit, ladies and gentlemen! Detroit.
Mind-blowing quote of the day, via a tweet from Zach McCann: Gilbert Arenas to JJ Redick: "We're the two best white shooters in the NBA."

So, moving along, heads up, golf fans! (That includes you, Pistons, Nyets, and any other NBA players who will have a lot of free time when the playoffs roll around.) The next release of EA Sports' Tiger Woods franchise will definitely be worth buying -- Tiger Woods PGA Tour 12 will finally include the Masters, marking the first time Augusta National has appeared in a videogame. Many of us thought this day would never come, considering the reluctance Augusta's management has shown over the years to even broadcast every hole of the tournament, much less allow someone to play it in a video game. That being said, I'm even more surprised by this: you will be able to play Augusta as a female golfer in the game. So much for the game being realistic, I guess. The best tweet about this comes from ESPN's Jason Sobel: "EA Sports missed some things with Virtual Augusta. Example: Can't use prize money to buy t-shirts from John Daly at Hooters down the street."

Random video of the day: Ray Romano on Saturday Night Live back in 1999 making fun of Sportscenter. Aside fromTim Meadows' Stuart Scott doppelganger having two functioning eyes, it's pretty well spot-on. Perhaps my favorite part of the clip, however, is something one of the random Yahoo commenters also pointed out: "Wow the Sonics had a bad night... lost to the Jazz in Utah and to the Lakers in Seattle." And we thought playing on back-to-back nights was bad... Also, I'm sure Seattle would be happy to be in that situation today, since it'd at least mean they have a team. 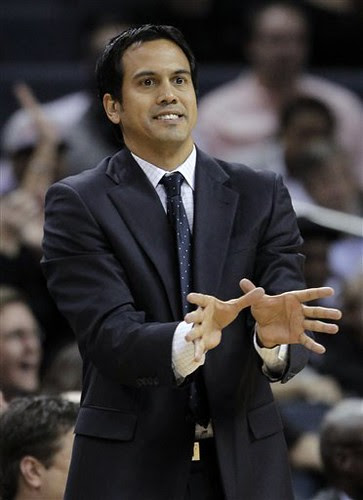 Caption This!
What is Erik Spoelstra doing? 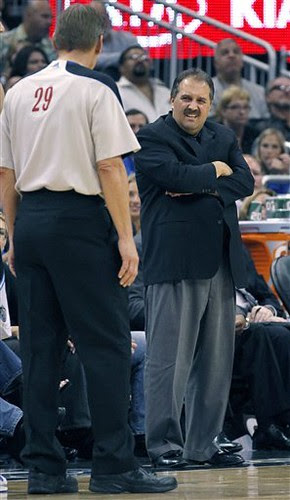 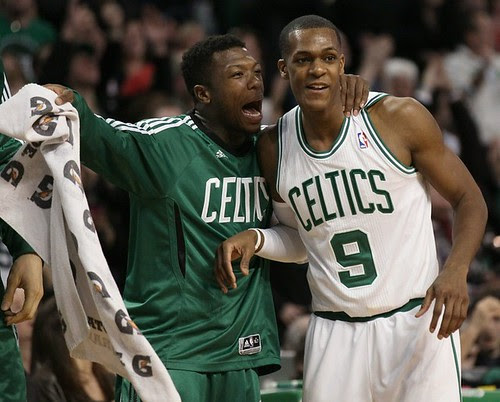 A picture says a thousand words, and this picture of Nate Robinson's expression says... something 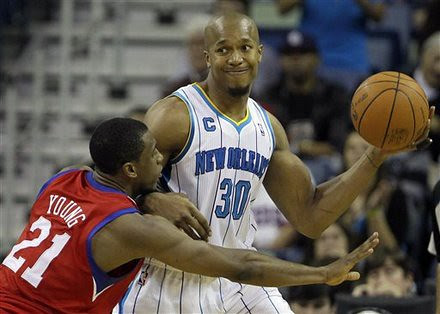 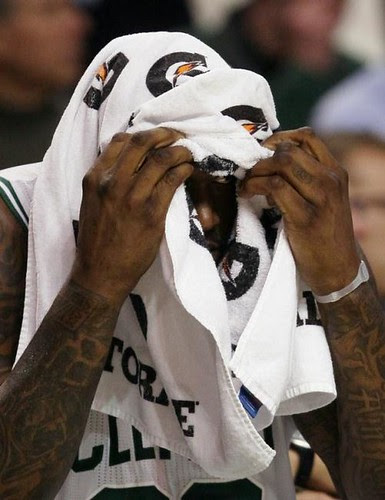 Nationally Televised Games:
Spurs at Knicks, NBA TV, 7:30pm: Numbers guru and PER proponent John Hollinger predicts Knick mediocrity thanks to a schedule that corrects itself after starting off super duper easy. Really? You don't say? That's only what pretty much all the writers and commenters on this blog have been proclaiming for weeks upon weeks now. And none of us needed a complex formula to figure that one out because sometimes it's just not necessary. Yes, advanced metrics are good for some things. But common sense and a quick glance at the schedule could fill in some blanks on this one.

All The Other Games:
Bucks at Heat, 7:30pm: I would call this a trap game, but have you seen the Bucks' offense this year? Hard for them to sneak up on anybody. Also, just for the record, I love the fake music-related nicknames thing from the WOTN comments today. Keep it going, guys.

Craptors at Bulls, 8pm: Check out this terrible Craptors jersey that appeared on Straight Cash Homey. Even better, it was spotted by Tas from The Basketball Jones. I love it when some of my favorite blogs end up working together somehow.

Also, Bawful noted something interesting about this game on his By the Horns blog:

Now, believe it or not, the Raptors have been on a roll against the Bulls in Chicago. The dinosaurs have won five of their last six games in the United Center, including the last three in a row. According to STATS LLC, Toronto has averaged 107.2 PPG while holding Chicago to 93.2 PPG during that stretch. Over the last three of those games, Derrick Rose has scored 13.7 points and shot 42.9 percent.

Of course, the Raptors haven’t played in Chicago since losing Chris Bosh. Or, for that matter, since Carlos Boozer started suiting up for the Bulls. So perhaps only recent history matters. When the Bulls played in Toronto on December 15th, Rose struggled in the scoring department (6 points on 3-for-9 shooting), but he had 11 assists as Chicago shot 53 percent as a team and won 110-93.

Thunder at Grizzlies, 8pm: Gloriously generic line from the STATS LLC game preview: "Improving their defense might help the Grizzlies with their consistency." Couldn't you say that about any team in any situation? If all other factors stay the same, improving your defense will always help you more consistently win games.

Frail Blazers at Mavericks, 8:30pm: Caron Butler = done for the season. Somehow the Mavs playing the Frail Blazers the same day this news breaks HAD to happen.

Hawks at Kings, 10pm: Let me get this straight. Joe Johnson's struggling with his shooting touch (6-of-20 from the field on Friday, 7-of-20 on Sunday). Yet the Hawks offense is still "give Joe Johnson the ball and let him shoot." Yes! It makes perfect sense! Or none at all.

Pistons at Lakers, 10:30pm: Some in-depth analysis courtesy of our old friend Knee-Mac: ""We haven't really put together consistently four quarters. We play well for a half or three quarters, but then we always have that quarter that lets us down." Basically, yes. This is why you're the Pissed-ons.

The Other Chris said...
Check out this terrible Craptors jersey that appeared on Straight Cash Homey.

The "gentleman" is strolling near Spadina and Dundas, the epicenter of Toronto's Chinatown. Chinatown (and Pacific Mall, represent!) is well-known for, ummmm, "authentic, genuine" merchandise.

Perhaps this individual had just purchased the jersey in C-Town. As well as the do-it-yourself tattoo kit.
1/04/2011 4:10 PM

Dan B. said...
Czernobog -- Not a golfer, I take it. :) Here's the Wiki on Augusta National, a golf course in Georgia that is the home of the Masters tournament, one of the four majors on the PGA Tour. It's one of the most prestigious tournaments in the world, and the golf course itself is extremely exclusive. (Beautiful and challenging, but decidedly exclusive) It only has 300 or so members, all by invitation only. As noted on the Wiki page, "Augusta National Golf Club is known to be a conservative institution where decorum is paramount; it is a place where traditions and the integrity of the game are jealously guarded." Women are not allowed to play golf at Augusta, and they didn't even allow a black member until 1990.

The people who run Augusta are so concerned about maintaining an aura of exclusivity and mysterious appeal that they long refused to allow very much TV coverage of the Masters. They didn't even show any of the first nine holes on TV until about 2002 or so. They very strictly control how the Masters is broadcast, with as little commercialism and advertisements as possible, etc. And up until now, they refused to allow the golf course to be recreated in a video game.
1/04/2011 9:29 PM

Jason D said...
It's amazing to think that the Lakers can destroy a team if they actually give a shit. Granted, it was Detroit, but the effort was there tonight and it paid off big time. Definately a greater focus on getting the ball down low tonight as well, even with Kobe being Kobe.

Big congrats to Kobe cracking the top 10 all-time scoring list as well. I know more than half the people here hate him, but you gotta give the dude his due. (It's hard for me to admit LeBron is am amazing player but, damn it, he is).
1/05/2011 5:05 AM

OJ Mayo and Tony Allen get in fight.

And of course they fought over a card game on the team plane. I swear, those little card games cause more fights than anything else in the NBA.

BTW, has anyone else been watching HBO's 24/7 show on the NHL Winter Classic? The footage of the Pittsburgh Penguins on their plane trips was great. A bunch of the guys playing against each other in a first person shooter on their PSPs and talking smack, just having fun.
1/05/2011 6:53 AM
Post a Comment
<< Home
Subscribe
RSS Feed
Mailing List