Hey Bawfulites - this is one of my few ever actual entries on Bawful. Usually I'm too busy and lazy to contribute directly, but Bawful browbeat me with merciless texts until I capitulated in tears. As a sidenote, I like basketball, but I'm not the pro that many are here with stats, history, etc. So if you want an in-depth analysis, look elsewhere. I just went as a fan of basketball and Basketbawful.

At any rate, I knew I was in for a real treat when I realized that I had Friday evening free for a Friday-Saturday student conference for which I was serving as the advisor. I went to get tickets for the Sixers versus the Cavaliers, and as an experiment there were 6-seat blocks of tickets in every single section. Last time Bawful and I hit a Bullies game on short notice, it was like trying to find a clean hooker in Cuba. (We found tickets, but they weren't ones we wanted). But no matter, we got upper deck seats behind the benches at half court. And my anticipation began.

When we got there the crowd was electric. I mean, the little 6-year old dropping f-bombs to his mom was really excited. And the girls signing us up for credit cards just after the gate were so excited they actually grabbed one of my students after he said, "No thanks." Ahh, it was good to be back in Philly. We went ahead and proceeded to our seats, about 15 minutes before the tip. So we could beat the crowd and get settled. 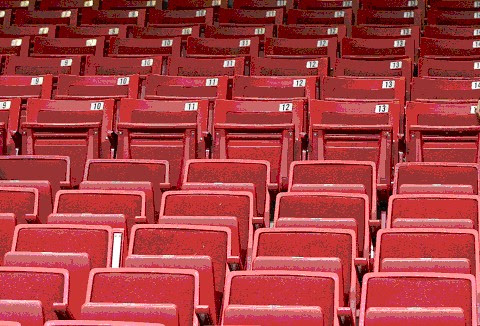 We made it.
I thought I was in a new episode for The Walking Dead . The emptiness was nightmarish. The only folks around were the Hare Raisers and the "Fans of the Game". In case you're too lazy to click that first link, they're the acrobatic posse for Hip-Hop, the least memorable mascot in the world. The PA system was blaring all sorts of gangster rap, which I think was targeted to the young, African-American population that wasn't coming to the game. Because they've got more standards than I do.

The teams finally come out to warm up, and it looked promising for a bawful game. The Cavs literally just did ten solid minutes of slow-motion layups. No jumpers. No dunks. Just boring layups. Fast forward past half-assed Hare Raiser shenanigans and a decent national anthem (thanks for printing the words -- I had a moment of patriotic despair when I realized we need to karaoke our own national anthem), and we were then treated to the best part of the game. The pre-game video.

I had honestly forgotten the entire legacy of the 76ers. I generally think of Barkley, Dr. J and Wilt. Of course Iverson was in that movie too, but they included scenes of Moses Malone, Maurice Cheeks, Billy Cunningham, Hal Greer, Dolph Schayes, World B. Free (how could I forget him?), Darryl Dawkins, George McGinnis, and Doug Collins. Sorry folks. No Shawn Bradley. But seriously, the 76ers have quite a long history, especially if you go back to their Syracuse days and beyond. No matter how bawful they get, you can't take that away from them.

The game opens and of course neither Varejao nor Hawes can get it on first jump. It pretty much falls onto Varejao who quickly bats it away before it gets stuck in his Jerry Curls. And the next 12 minutes convinces me that if defense was not included in the ticket price. Mo Williams was just waltzing to the basket with abandon, and Varejao was getting easy boards and putbacks. Oh, and flops. After Holiday hit him at about 6 MPH, Varejao flew out of the paint like a wad of wet paper towels out of a PVC potato cannon. At this point I text bawful that the Cavs are up by 20 in the FIRST QUARTER and that Varejao is flopping. "Natch" is the reply.

The other best part of the evening then took place. CRAB FRIES! What better awesome treat for the Craboliers game? Seriously. I'm a right fat bastard compared to most of you. I like my food. And when I die in the sack at 65 it is a conscious choice! So the crab fries were totally on my radar as my only source for dinner that night. The only sad part was that since I was advising students, no beer for me. I guess it did keep the tab down. Oh, and in PA we have Yuengling: America's oldest beer. It is so much better that Barfweiser or Miller Diarrheal that it's my gold standard throughout the year. If you ever get the chance, do it. But, sadly, I passed and instead reached for an ice, cold, root beer.

During this time the announcer must have drunk the purple Kool-Aid, because he officially died worse than the defense in the game. At one point, Jamario Moon made a wide-open jumper, and the only thing over the PA was a strange mix of Ben Stein and Bob Thornton from Slingblade: "Jamario. Moon." The Sixers though, started battling back. I think it was less of a desire to win and more of a lack of understanding that they were even down 20. The Cavs started missing a few more shots due to the smell of the Crab Fries, and at half the Sixers were only down about 10.

Here's where I realized that some teams are in sorry financial shape. The last few games I’ve been at have been in Chicago, where they can afford such awesome hits as Duo Design. The Sixers ran three "follow the peanut" games on the scoreboard and had two contestants try to hit jumpers from the layup position (worth $2), free throw ($3) and a three-pointer ($5). They had three minutes. The winner won $10 to $3. And despite all of that, it was still better than Duo Design. 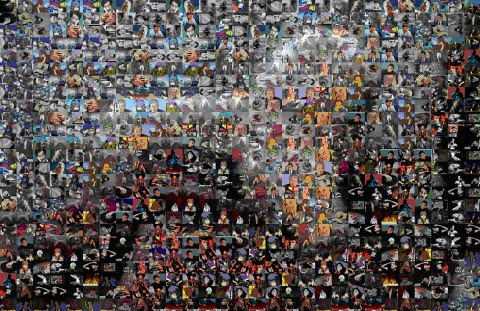 I just can't reference Duo Design. Instead,
I'll post the reaction to our contestants.
The third quarter made it seem like the Sixers cared about winning. Elton Brand started coming over the PA more and more. I did a rough calculation – I figured his contract was about $15 mil this year (good guess – it’s $15,979,099). With the math on my cell phone, I figured he was getting paid about $183 K for this game. Each time his name got called, it was worth anywhere from $9 to $16 thousand dollars. Freaking SlingBen Stein on the PA was making me depressed. I then noticed Holiday was having a holiday on the Cavs. Who is Holiday? I don’t even know this guy. As a little perspective, he’s making $1.6 mil this year. Every time his name got called he was making a little more than $1,000 dollars each time. And by the hustle in the game, *he’s* the one that should have been paid 10 times the amount of other players.

Thank god for the 4th quarter though, because surely the magnets that held down defender’s shoes would be turned off. Right? RIGHT? Well, the first two quarters of the game the Cavs put up 34 and 27 points, and then bricked their way to 18 points in the third quarter. If Philly could just keep them to about 24-25 points, they can score more than the 6 they need to win! Or, instead, they forget all about defense and treat the lane like it’s Vault 87.. Daniel Gibson and Mo Williams were waltzing in the lane constantly. And, in a way that only a team anchored by Elton Brand can do, the Sixers proceeded to stand around more aggressively to give up 44 points in the fourth and lose the game.

Overall, I felt like I spent $45 bucks for a good pick-up game. There were almost no set plays, awful defense, and bewildered guys just hoping to get back on the bench for their own Crab Fries. But one thing about NBA games that I can always appreciate, is the parts of the game you only get to see live.

Dan B. said...
BadDave -- To quote the meme, cool story bro. You made it feel like I was right there in the sea of empty seats and lazy defense. Good job.

Alex said...
As a 76ers season ticket holder, I can relate to the experience you had...except it happens about 30 times a year (the seats are mostly filled for the best teams). The season opener vs. the Heat was "soldout," but I think nowadays soldout means 75% capacity. Philly games are depressing.
11/08/2010 5:56 PM

Czernobog said...
@Zyth: The best part was seeing Obradovic direct him to the slovenian bench. Like Batiste is some sort of 32 year old infant and Obradovic is his kindergarten teacher.
11/08/2010 5:56 PM

DKH said...
I think it's interesting that Cleveland has so far managed to rank 7th in attendance (at least according to http://www.basketball-reference.com/teams/CLE/2011.html). Although, obviously, that could/will change after a few years of losing.
11/08/2010 7:58 PM

Barry said...
Great story, I remember Duo Design from (I think)the 2008 Finals, normally the Dutch tv cuts right to commercials but suddenly I was hip-deep in spandex, homo-erotic poses and straight-up man love. This was very early in the morning, needless to say I was less than pleased.
11/09/2010 5:41 AM
Post a Comment
<< Home
Subscribe
RSS Feed
Mailing List