Robert Parish is not afraid to sweep the leg
(Via Andy Gray's SI Vault)
Here's your odd headline of the day, per JE Skeets: "Derrick Rose fails to show up to film cameo for 'The Good Wife'." According to the article:

The Bulls point guard refused to come out of his house in Chicago when the crew sent a car to pick him up on Tuesday morning, sources tell us.

Rose -- who helped the Bulls to victory over the Portland Trail Blazers at Chicago's United Center on Monday night -- also refused to give the show's producers an explanation for his no-show, even though they had him booked on a flight to New York, the source added.

Yes, Rose punking out at the last minute is crap, and I am dismayed that he couldn't show the decency to give them any advance warning or even just give them some kind of explanation. That being said, I'm pretty sure he just realized "I'm going to be on 'The Good Wife'? The Good Wife? Fuck that noise! I'm playing Xbox today."

Here's something Trey Kirby shared on his Twitter feed: ESPN's Josh Elliott and Amar''''e Stoudemire go head-to-head in a three point shootout using wads of paper and a trash can. I think you can predict who will win this one.

Amar''''e can't even create his own shot with friggin' wads of paper
Worst of the Night in Pictures: 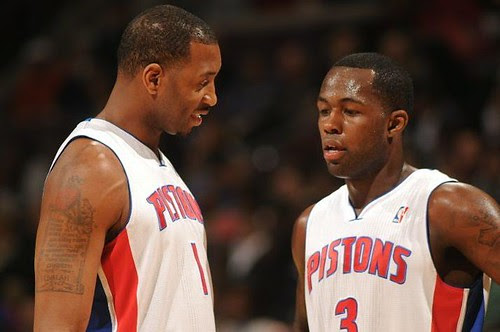 The actual ESPN.com caption for this pic: "Tracy McGrady #1 and Rodney Stuckey #3 of the Detroit Pistons stalking during a game..." Quick! Someone call the cops! 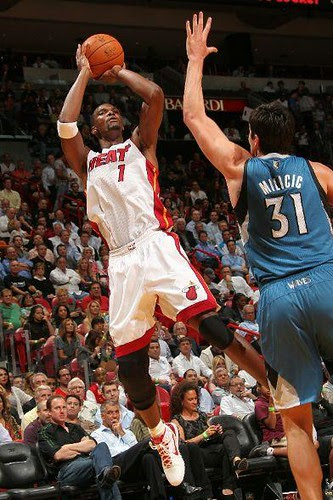 Darko Milicic does not understand the finer points of "hand-in-the-face," such as, you know, getting your hand in his face... 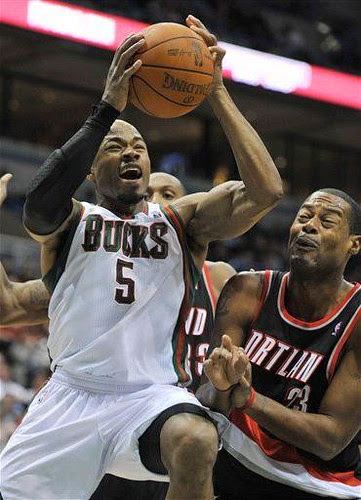 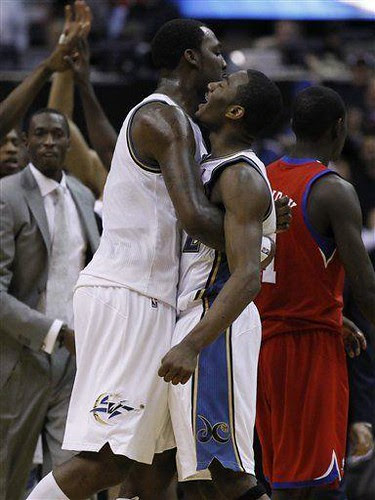 A rare Wizards Generals win? This calls for some celebratory man love 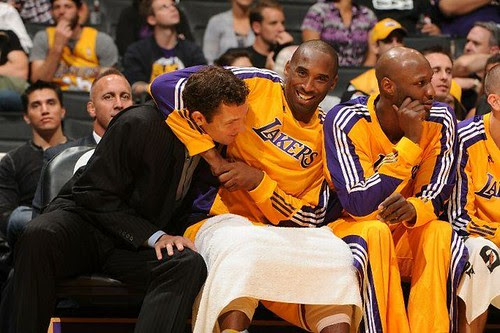 "Just one little twist and I could be rid of Luke Walton forever..." 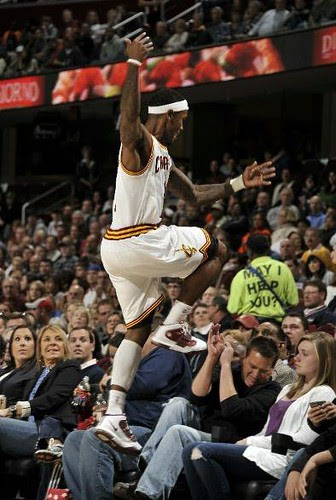 Crowd surfing -- you're doing it wrong, Boobie Gibson
Nationally Televised Games:
Bucks at Celtics, ESPN, 8pm: For the record, I really, really do not care about this whole Charlie V/KG spat. Wake me up when they actually throw down in a boxing ring. (If they do, I'm sure that the WBO will make it an interim title fight for a diamond belt, for a small sanctioning fee of course.)

Lakers at Kings, ESPN, 10:30pm: Well, the good news for the Purple Paupers is that they'll still be over .500 even after tonight's loss. Yay!

All The Other Games:
Pistons at Hawks, 7pm: Great. We get to have another day of the media getting overly excited about the Hawks after they beat a bottom-feeder. I can hardly contain my excitement.

Bobcats at Nyets, 7pm: The Bobcats are 0-3, but according to Stephen Jackson, "It's not panic time." Bobcats fans, however, beg to differ. Any time Stephen Jackson is one of your best players is, indeed, panic time.

Timberwolves at Magic, 7pm: Darko Milicic has a 1.9 PER through 84 minutes this season. As you watch Dwight Howard play opposite Darko, think of the things that David Kahn could have done with that $20 million: burn it; piss on it; acquire 44.4% of Mike Conley. It's a fun game. Certainly more fun than watching the Timberpups play.

Pacers at 76ers, 7pm: So the question must be asked... at what point do we have to keep an eye on the 76ers to be one of the worst teams of all time?

Mavericks at Nuggets, 9pm: With injuries and all the Carmelo drama, it's almost been overlooked that Chauncey Billups is shooting a whopping 27.6% from the field right now. At what point do we just take him out back and put him out of his misery like Ol' Yeller?

Craptors at Jazz, 9pm: Deron Williams has never lost to the Dinos. This does not surprise me.

Spurs at Suns, 10pm: I don't know about you, but I still remember those epic Spurs/Suns playoff games from a few years ago whenever these two teams meet. However, considering all the roster turnover since then (especially in Phoenix), do the actual teams really care that much?

Also, Tim Duncan can potentially become the second-leading scorer in Spurs history after this game. Honestly, who on the Suns is going to stop him? Hedo? (Ball.)

Grizzlies at Warriors, 10:30pm: Stephen Curry is likely to miss this game with a bum ankle. Get ready for Monta Ellis to get a stupidly high usage rate in this game.

Thunder at Clippers, 10:30pm: OKC has struggled with their defense a little this season. Nice to know that won't be an issue tonight.

Anonymous said...
"As you watch Dwight Howard play opposite Darko, think of the things that David Kahn could have done with that $20 million: burn it; piss on it; acquire 44.4% of Mike Conley. It's a fun game. Certainly more fun than watching the Timberpups play."

What's sad is that if you replace "Dwight Howard" with "Marcin Gortat" in that sentence it still makes sense.

Unknown said...
Your Clippers post reminded me that Griffin's team has three back-to-backs in the first nine games, with San Antonio (last night), Utah, and San Antonio as the second game in those back-to-backs.

Anonymous said...
"And anyway, haven't you even thought about penciling in some eyebrows?"

Keaton said...
Maybe the Cavs should pick up that security worker in the back of the Gibson picture... it seems like he might be willing to help the team out.
11/03/2010 5:43 PM

Michael Hsu said...
If Darko is such a good passer why does he average < 1 assist a game for his career and only 1.1 when he played at his "Best" for the magic?

Will said...
The Indiana Pacers made NBA history tonight by being the first team to attempt all their shots with their eyes closed. How else could you explain shooting 31.5% from the field?
11/03/2010 8:30 PM

Will said...
Meanwhile, in Orlando, the Timberpups had a bet amongst themselves to see who could make the Magic big men feel the best about themselves. The runaway winner was Donnie Darko, who helped Dwight Howard, Marcin Gortat, and Brandon Bass combine for 19-27 shooting, 49 points, 31 rebounds, and 11 blocks. Oh and Mr. Milicic went 0-6 and was blocked twice.
11/03/2010 8:46 PM

AK Dave said...
Could someone remind me what the Net's record is since Devin Harris said "we knew we were going to be a playoff team"?

Unknown said...
Kobe gets a triple double and the Clippers beat the Thunder 107-92. Good night for both LA teams.

AnacondaHL said...
geremy - No actual quotes from important people, other quotes taken likely out of context, all from a shady tabloid site. Right.
11/04/2010 12:43 AM

Austen said...
Just a note for tomorrow's "Worst of the Night" on the Raptors - Jazz game: on a night of really terrible performances by the Raptors, they managed to turn the ball over with 1.4 seconds left to go before halftime when the ballcarrier stepped out of bounds...on the opposite end of the court. Then the Jazz inbounded the ball to CJ Miles, who hit a 3-pointer at the buzzer. After being beaten by a buzzer-beater the night before, you'd really think they'd have learned from that.
11/04/2010 1:26 AM

Austen said...
Err...upon watching the replay, make that "end of the 3rd quarter" rather than "just before halftime." It's particularly embarassing for the Craptors then, because the game was actually close again at that point (4 points) after they made a major comeback in the 3rd. Then they let CJ Miles get that 3 pointer off at the end of the 3rd, and the lead was never that close again.
11/04/2010 1:32 AM

Barry said...
I'm pretty tired of Chris Bosh pulling that fade-away everytime he is 1 on 1 near the basket. Attack it already!

Of course after this surprising Clippers win (they were throwing flashy alley-oops near the end for fucks sake!) I'll be looking for the classic "they are who we thought they were" game.
11/04/2010 7:22 AM

Ignarus said...
That's some weird shit from D. Rose, isn't it? Bad face day? Realized he was playing a cameo as a baby rapist?

Prolly something more like tweaked an ankle a bit and thought it would be wise to stay home rather than have the media chalking up a crap performance on the court to making a cameo appearance.