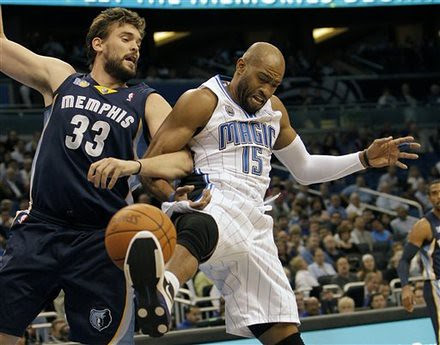 Oh, Vinsanity. What would we do without you?
I just saw SI's Jimmy Traina post this on Twitter: "Via TMZ, Eva Longoria and Tony Parker are divorcing. Parker filed yesterday." I would provide details, but the less I visit TMZ, the happier I am with myself as a human being, so tough luck. Therefore, I can only speculate that he felt he needed to step up his game to match fellow point guard Steve Nash who is also getting divorced.

Update! Holy hell, I just saw this on Deadspin and had to share...

DO NOT WANT
Worst of the Night in Pictures: 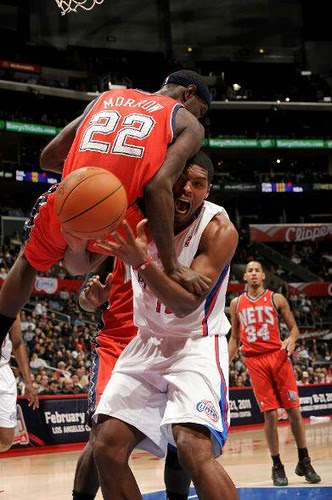 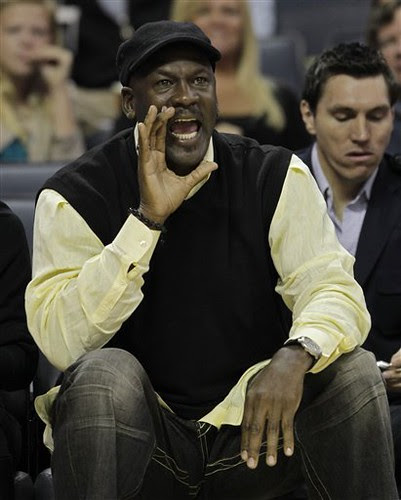 The point carried over from yesterday's post? Jordan can dress however the hell he likes 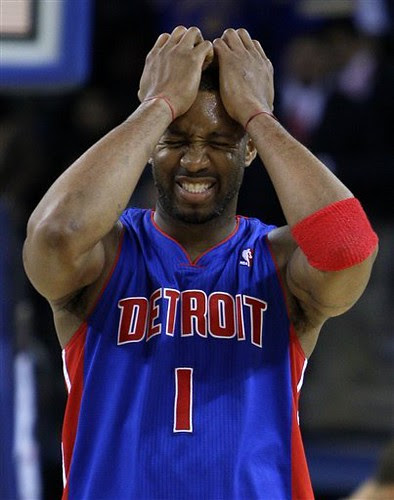 Knee-Mac reacts to the realization that "Oh shit! I'm playing for the Pissed-Ons!" 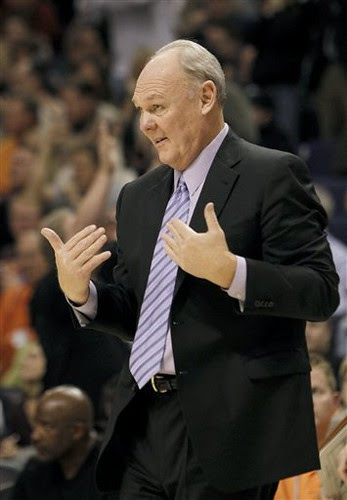 Hmm... I wonder what lady George Karl is talking about? 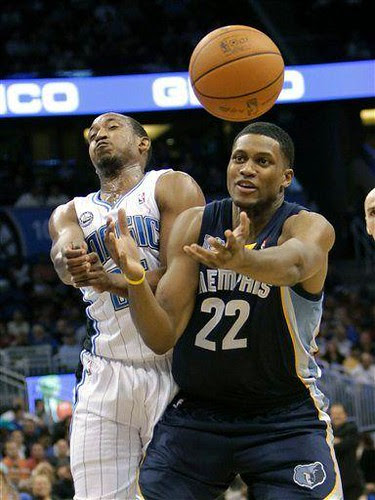 The Grizzlies/Magic game summed up in one picture! How convenient 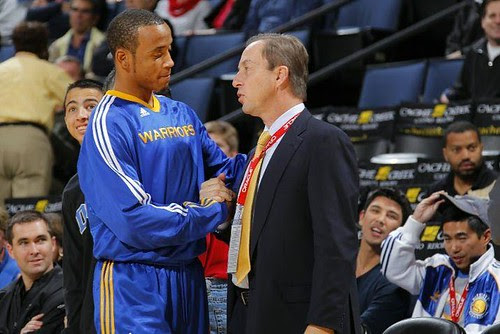 "So you're one of the poor bastards who bought the team..." 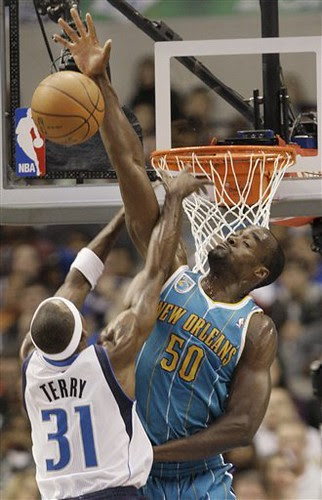 Nationally Televised Games:
Frail Blazers at Grizzlies, NBA TV, 8pm: The more I read about Brandon Roy's arthritic knees, the more depressing it becomes. What did Portland ever do to deserve such horrible luck with injuries? And who's got all the voodoo dolls of Blazers players?

All The Other Games:
76ers at Cavaliers, 7pm: According to the STAT LLC game preview, "[Evan Turner]'s getting much less playing time than [John] Wall because 76ers coach Doug Collins doesn't want to tire him out." I think we found the perfect head coach for LeBron!

Hawks at Pacers, 7pm: Here are some interesting numbers... When the Hawks get a 15 point lead this year, they fall apart like Michael J. Fox's Jenga tower, shooting an abysmal 35.0%, and they let their opponents make nearly 49% of their shots during that stretch.

Craptors at Wizards Generals, 7pm: John Wall sprained his foot last game and is out tonight. Remain calm! All is well!!

Bulls at Rockets, 8:30pm: Well, crap. It's that time again -- circus trip! Seven consecutive road games are lined up for the Bulls while the circus takes over the United Center. The circus trip is a sad time for Bulls fans, considering they have gone 10-61 in those games since Jordan's last season with the team. So, like our own Bawful, I will not get too optimistic about this game.

Bricks at Nuggets, 9pm: It's a good thing this game is in Denver and not NYC. Crazed New York fans might try to kidnap Carmelo since the Nuggets won't trade him to the Bricks.

Anonymous said...
so Eva is going to be single again?
Thank you, great gods of mercy and kindness for bringing this glimmer of hope into my life! Excuse me while I find my shmazziest outfit and go woo The artist formerly known as Mrs. Parker
11/16/2010 3:49 PM

Anonymous said...
That news about Brandon Roy is pretty disheartening. I'm not even a Blazers fan but he seems like a genuinely good dude and a solid leader. If it's as bad as it sounds, I can't see how he will have an effective career past this point, and that would be a damn shame.
11/16/2010 4:09 PM

The Suns version of my scheduling post has been published to ESPN TrueHoop's Phoenix blog, Valley of the Suns
11/16/2010 4:10 PM

Sorbo said...
Does anyone just drink anymore? What happened to Whiskey and Coke being enough? You'd have to drink 4 of those Four Loko things just to get a minor buzz on.

The Dude Abides said...
Apparently TMZ pulled the Eva-Frenchy divorce story due to falsehoods from their "sources."
11/16/2010 6:14 PM

Wormboy said...
1) TMZ: Bwahaha. Bet they got a lot of hits, and that's all they wanted.

Basketbawful said...
Just thought I'd give a brief (but perhaps meaningful) history lesson.

The 2010-11 Heat, to me, are very similar to the 1968-69 Lakers. That Lakers squad was considered the first NBA Superteam. They were stacked with three of the league's best players: Wilt Chamberlain, Elgin Baylor and Jerry West.

Much like LeBron and Wade play similar iso/perimeter games, Wilt and Baylor both played in the low post...and neither of them seemed to play well at the same time in the early going.

Despite stacking the deck, those Lakers lost their first game 114-96 to the Sixers, the team that traded Wilt to L.A.

They lost three of their first four games. They were 4-4 after eight games and 6-4 after 10.

Eventually, they got their shit together, won 55 games and made the Finals, where they infamously lost Game 7 at home to the veteran and defending champion Celtics.

Anonymous said...
With everyone yacking about how Lebron and D-Wade playing too many minutes, I decided to not do anything.
But when it showed up on the NBA's homepage, I decided to check it out and found out that Lebron is averaging a career low in mpg over the first 10 games.
And D-Wade is averaging a second lowest mpg season so far.
Sure, they've faced some creamy puff teams so far that have given them extended rest and brought down their average, but aren't your best players supposed to play the most minutes? Or has the entire NBA been brainwashed by KAHNNNNNNNN and his K-Love minute managing atrocity and believe that the team's best player should play for under 20 minutes?
The point is, the entire NBA-related media should stop gently fondling Heat's testicles with their hands while furiously fellating them and finding apologizes while licking their jizz-coated lips and going back down for more and just desert them in their mediocrity until they deserve to be talked about. Which is, uhhh, when Lebron opts out. Better yet, don't even talk about them then.
11/16/2010 7:05 PM

Paul Chukura said...
before this bad game rudy gay was having a great season lets see how he bounces back before we talk about his contract
11/16/2010 7:25 PM

Dan B. said...
Sorbo -- Honestly. Rum and Coke or Sprite, or vodka mixed with pretty much anything. They taste good and don't require drinking large quantities to get a buzz. And I am not drinking to just drink all night long and get drunk. A nice buzz is plenty for me.

Azreous said...
Apologies if someone else has already pointed this out:

Tim Keown apparently thinks Kobe's appearance in a Call of Duty commercial means that youngsters are going to go kill each other with guns now. Not that this argument has been made (with much better writing) off and on for 15 years or so.
11/16/2010 9:16 PM

Sorbo said...
@Dan. - Sorry, I didn't mean it as people should just drink until they are wasted. I meant that these guys used up twelve hours to make the equivalent of a wine cooler with a beer mixed in.

But you're right about a rum and coke. It's a solid back-up to a Jack and coke. Basically, unless you're making martinis, no alcoholic beverage should have more than two ingredients.
11/17/2010 12:46 AM

Dan B. said...
Has this been posted here already? I can't remember.

I don't know if things will turn out like Bawful's analogy (mainly I have doubts about Heat making it to the Finals). But, I do think Lakers will complete the 3-peat. I feel like this is similar to MJ's last year at Bulls, not that Kobe/Gasol are leaving. I just believe it'll be Phil Jackson/Kobe's last championship.
11/17/2010 8:04 AM

Basketbawful said...
Has this been posted here already? I can't remember.