"Thought you might enjoy this: Take a look at the reason for McGrady taking the night off. I've seen hundreds, maybe thousands, of fantasy notes, but I have never seen anything quite like it."

And here's the money shot: 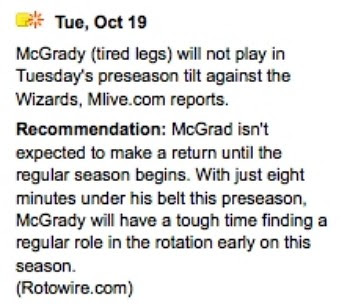 Knee-Mac has logged eight minutes in the preseason. And his legs are already weary. Remember: This is what Tracy said back in late August:

"There's no question [I get back to being an elite player]. There is no question. Yes, because my body feels good. I'm in great shape. I'm in better shape than I've been in for the last three years. I'm a lot leaner. I'm telling you, a lot of people are going to be shocked. That's all I've got to say."

Since then? Eight preseason minutes. But I'm sure it's all just precautionary. Kind of like how you have to cover fragile things in layer after layer of bubblewrap before you can mail them anywhere. Because otherwise they'll break. Easily.

I'm sure this will end well.

SirGirthNasty said...
I seem to remember a TNT or ESPN segment a few years ago that showed Tracy McGrady working with a trainer to come back from his back injury (i.e. sandy vagina). I remember thinking "He does work hard. I guess it's kind of unfortunate that he's so injury prone". Now I'm convinced that he was really working hard because the camera was there.

Unknown said...
I googled "(tired legs)" and here's the opening of the first entry:

"The legs are tired a problem that increasingly affecting the population. Today, a 80% of adults suffer discomfort in the legs tired, whether they are men or women although the latter often suffer from the problem of tired legs most often due to hormonal problems caused by menstruation, menopause and other related venues. The most common causes that often lead to the problem of tired legs are basically about bad habits or insufficient in our lifestyle. The little exercise, sedentary lifestyle, diet, obesity, heredity and periods of hormonal changes in women themselves, are the most frequent reasons."

The person who wrote this needs an editor, but I'd say pretty much describes Knee-Mac.

Czernobog said...
Man, remember when he was just starting out in the league? What a study in inadequacy this man is.

And off topic, not even basketball related and a few days late, but still hilarious:

Mesut Özil pushes a ref out of the friggin' way:

Anonymous said...
Not sure if this was posted yet but this is disturbing news..

Unknown said...
Another Bawful player bites the dust: Morrison dropped from the Wizards. He won't be able to use his championship "experience" to mentor Wall.
10/22/2010 1:38 PM

David Landon said...
T-Mac has one very important skill: the ability to convince NBA execs to pay him large amounts of money even though he's so obviously a giant vagina with feet.
10/22/2010 3:44 PM

Unknown said...
I'm a long time Pistons fan and actually attended the "tilt" between the Pistons and Wizards on Tuesday. I think I speak on behalf of most Pistons fans when I say we're not expecting much of McGrady this year. The best that can be said about the move is that he was dirt cheap -- so the slight possibility there's an upside, especially as a trading chip to a contender later in the year (and yeah, we Pistons fans have figured out that won't be us this year).

On the other hand, Detroit already had a ridiculously unbalanced roster with a bunch of wingmen (shooting guards and small forward types), few bigs, and no bigs who have a decent post offense game. So even if McGrady's legs are fully awake and he can play, it's unclear from whom he should be taking minutes.
10/22/2010 3:55 PM

Reignman said...
Even if every bawful player in the world got his s**t together and stopped being bawful (i.e. Darko living up to his "potential", Kwame not sucking, Adam Morrison becoming a fine all-around player, etc) we would always be able to count on Knee Mac...he's our insurance policy, if the entire basketball world stopped producing bawful moments, we'd still have Tracy McGrady...God Bless his fragile body and his even more fragile mind
10/22/2010 4:23 PM

Azreous said...
I remember the good ol' days when we used to wonder if Knee-Mac had the intestinal fortitude to will his team to one playoff series win. Just one.

I have a small parcel of sympathy for Knee-Mac. You can shift genetics a little bit, but you can't remove it. It's not his fault that he's not AC Green. Knee-Mac has a fragile body, obviously. Excellent training could mitigate that, but not remove it. That's it for the sympathy, because he could damn well do better than he has. That is true for many NBA players.
10/22/2010 6:38 PM

Karc said...
NBA canceled the Magic-Heat preseason game tonight due to "slippery floors." No joke. Well, there are plenty of jokes, like the potential of losing Chris Bosh to a sprained ankle because he slipped on the floor trying to play defense.

Yeah, for three "stars" supposedly in their "prime," they sure are acting old. Now Mike Miller is gone until January, in addition to D-Wade bad leg and LeBurnt's sensitivity to racist tweets that everyone in the league gets.

L15 said...
speaking of injuries...how did this happen?

Promoman said...
I think this is suspect. How can he have tired legs without having had any playing time? I think the Pistons just have him around for salary cap reasons.
10/23/2010 9:25 AM

Cody A said...
I was just about to post the Maggette line LotharBot...As far as BR can tell me, if it had of happened in the regular season it would have been an all time record (since 1986) for the most points scored without hitting a field goal.

Put this in your collective pipe and smoke it.

Benway said...
@AK Dave
Will make sure to return the favor when OSU is inevitably skid-marked in whatever bowl game they end up in.

tbone said...
TMac is one of the all time greatest NBA players. In his prime, far superior to Kobe, though obviously unable to match him in terms of durability. Is it really his fault that he couldn't win a playoff series with darrell armstrong as the second best player? Or that when he finally got a worthy teammate, he was the indestructible Yao? How many playoff series' did Kobe win without Shaq or Pao? How short is your memory? T-mac is an alltime great. I always loved watching him play.
10/24/2010 12:20 AM

Reignman said...
@tbone: I'm not sure what T-Mac you've been seeing all these years but I'm quite sure he's NOT an all-time great. That's an insult to true legends.

I just saw this Richard Jefferson photo. I'm sure Luke Walton was around there somewhere. Heck, he might be the guy taking the picture (and I just noticed what the guy with the camera is doing with his other hand lol)
http://uploadpic.org/storage/originals/efnd284sdf2fnnujnkd3n82223.jpg
10/24/2010 3:58 PM

Benway said...
@AK Dave:
Just going to guess that these guys sent you a link a couple weeks ago after the Wisconsin game. Am I right?
Truth is, I don't really have a dog in this fight. To me, watching the midwest play football is like watching the WNBA. Same game, yet somehow much less interesting. I know, OSU sends players to the NFL. I know what the numbers say. Beanie Wells & Maurice Claret are the bomb. Troy Smith holds a clipboard better than Matt Leinart. Ted Ginn is awesome too. I know. I've heard the rhetoric.
And believe me, even though I lived in Florida when it happened, I was really rooting for you guys... really, but you blew it, and you got punked when it mattered, and you helped to create the legacy of Tim Tebow, and for that, I can never forgive you. For that, you & the entire Buckeye nation should be forced to listen to Tim Tebow read you eye black Bible verses until all yr meaningless little helmet stickers fall off.
Because I hate Tim Tebow like a fat kid hates Herpes.
10/25/2010 2:03 AM

Stockton said...
"TMac is one of the all time greatest NBA players."

"In his prime, far superior to Kobe, though obviously unable to match him in terms of durability."

True... in a 14-second game, I have no doubt TMac would kick Kobe's a$$. If he had the ball to start with. And if kobe was blindfolded.

"Is it really his fault that he couldn't win a playoff series with darrell armstrong as the second best player?"

Houston was THAT bad all along?

"Or that when he finally got a worthy teammate, he was the indestructible Yao?"

But still, those lousy rockets, did put more of a fight in the lakers series without tracy than with him...

"How many playoff series' did Kobe win without Shaq or Pao? How short is your memory?"

How many did jordan win withou pippen?

"T-mac is an alltime great. I always loved watching him play."

Stockton said...
I'm disapointed...
so many comments, and nobody made a "tired vagina" joke...

On a related note, I was checking nba.com for the GM's survey, and saw some amazing notes, like "Vince carter would be the most impact players in 2009/10", and "washington would be the most improved team".
Taking the season spirit, would mr. Bawful consider a poll of the 2010/12 predictions?
Like the worst team, team who will decrease the most, team with most arrests, player with nost "flue like symptoms", team with most "surges"...
10/25/2010 6:24 AM

Your comments make me feel warm and fuzzy inside. I feed on OSU hatred like the a zombie feeding on brains.

"When it matters", is against Michigan. And OSU has not lost "when it mattered" in a long time. Until a team comes up to play a bowl game in Madison, Columbus, or Ann Arbor in the fall, I don't want to hear about how great the SEC is for winning home games.