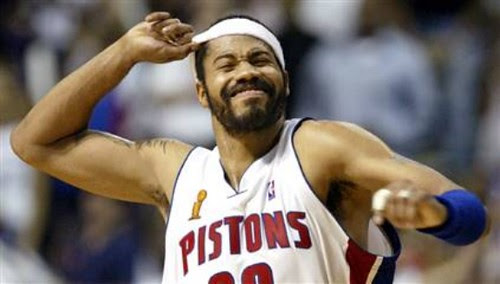 According to ESPN's Henry Abbott, referees have been instructed to call a technical for:

Players making aggressive gestures, such as air punches, anywhere on the court.

Demonstrative disagreement, such as when a player incredulously raises his hands, or smacks his own arm to demonstrate how he was fouled.

Running directly at an official to complain about a call.

Excessive inquiries about a call, even in a civilized tone.

Refs can also consider dropping the T-Bomb on players who "use body language to question or demonstrate displeasure" and "take the long path to the official" (that is, walking across the court to make their case). Just guessing here, but I bet laughing at calls is also off limits.

Usage example: Did 'Sheed know The Rasheed Wallace Rule was going into effect this season? Maybe that's why he decided to hang up his jock.

Word History: At TrueHoop, Abbott noted that a similar set of rules were implemented prior to the 2006-07 season. (I called those guidelines "The Rasheed Wallace Rule" even back then.) After a very short enforcement period, those rules were forgotten almost as thoroughly as Pauly Shore's entire misbegotten career.

So the big question is: Will they stick around this time? I doubt it. But if they do, we may never see another montage quite like this:

Unknown said...
As much as I hate players showing up the ref, this is not going to end well. In a league known for dubious officiating, the last thing the NBA needs is a policy where the players can't question the refs at all. What constitutes "excessive inquiries"? Two questions could be too much for Crawford.
9/27/2010 10:53 AM

CaptainHomeless said...
This could also be called the anti-Tim Duncan "I'm going to bug my eyes out and look like you just killed my mother every time you call a foul on me" rule.

Marc d. said...
I like that they are trying to clean the game up, but I think excessive flopping and the dreaded "superstar calls" are far more damaging to the game than the whining.

Unknown said...
As usual, they're addressing the symptoms but not the cause. Players are going to bitch if they think they've been wronged whether or not they actually were, as will the coaches. Rather than trying to hide behind the well-known problems the sport has by punishing anybody who questions it with any emotion, consider exactly what institutional inadequacies you have and solve them. Even something like an extra ref for more coverage on plays would help, but that would actually be doing something.

Now, the worst of the gesticulating or begging/mouthing off at the refs is certainly worthy of a T but that's the way it is already without having to add rules that basically prohibit showing emotion in a highly charged situation.
9/27/2010 2:13 PM

Unknown said...
I think I'm going to be Rasheed Wallace for Halloween. I'll enter a costume contest and when the winner is announced, and it's not me, run and scream all over the place like someone just stole my 50" plasma TV. I could have fun with this idea.
9/27/2010 3:46 PM

AK Dave said...
These rules, if we are to interpret them based on the plain meaning of their language, give referees the same type of authority over NBA players that Russian Commissars had over their soldiers in WWII: unfettered discretion to use overly severe punishment to suppress any expression of dissent.

(Note to everyone on the Internets: see how I did that without involving Hitler or slaves? You're welcome.)

As I look at these rules, I can tell just at first glance that if any government in this country (state/municipal) tried to codify them into law, they would be instantly stricken on constitutional grounds.

It makes me wonder: is the NBA NOT subject to the supreme law of the land which grants citizens the freedom to express their beliefs in peaceful protest?

These rules are barbaric, unconscionable, one-sided, and unamerican.

They shift the blame for referee-player arguments unjustly and unconditionally on the player, and in doing so create an even more unbalanced power dynamic between them. Like flight attendants who now all of a sudden have the power to have people kicked off of planes and arrested by air marshals, this rule gives referees power which will unavoidably corrupt. How long until the record for most T's in a game/month/season is set?

Furthermore, the rules simply do not jibe with basic human instinct. Are these players supposed to be emotionless robots when Manu Ginobili flops at a critical moment in a close game? If the answer is "yes", then the only way to achieve such a result would be to lobotomize each player and remove from their brains any desire to win. When things don't go our way, we as humans react in conscious and sub-conscious ways. I'd bet that the Tim Duncan Face is more a sub-conscious reaction than a planned, choreographed "showing-up" of the referee. Should he be punished for having normal human instincts?

Therefore these rules are a joke. They don't pass constitutional muster, they give referees too much power and discretion, they shift the blame unconditionally onto players, and they fly in the face of human nature.

In the end, I hope that they just get ignored, but with the way information spreads these days, that is unlikely. Here's hoping I'm wrong.

The Other Chris said...
In other news, Greg Oden apparently has patellar tendinitis and won't be ready for the start of the season:

Anonymous said...
AK Dave - you are SUCH a lawyer, and based on that argument you MUST be from alaska because you sound like Palin talking about free speech.

As a matter of employment, the NBA absolutely can dictate what it's players say and do, ESPECIALLY during an actual NBA event. At home, in a private conversation, definitely not. In a non-NBA but public event, they do but likely because it's part of a signed contract - that would be negotiable based on the judge, lawyers, etc. But in a game? Pssh. It's constitutional. (Sorry about the Palin jokes - it was just too easy)

I don't really have an opinion on the rule itself. I like that the league wants to stop that bullshit, but have grave concerns about the consistent enforcement.
9/28/2010 4:51 PM

Anonymous said...
As a Magic fan, I'm curious to see if Dwight Howard can break Rasheed's technical foul record this upcoming season with these new rules in effect. Maybe DH12 will rack up so many T's that Rasheed has to come back just to protect his good name.
9/29/2010 12:23 PM

Yeah the constitutional thing was a little tongue-in-cheek.

But really, dude. These rules look like they were written by Bennett Salvatore, not anyone with a real brain.
9/29/2010 1:04 PM