Wednesday, August 25, 2010
These Super Friends look Super Fabulous
By Basketbawful at 8:04 AM
19 comments

Back in July, Richard Jefferson opted out of the final year of a contract that would have paid him $15 million for the 2010-11 season. Leading financial experts immediately agreed that $15 million was about $15.5 million more than Jefferson was actually worth, which made RJ look like the world's biggest sucker...

...until the San Antonio Spurs bailed his dumb ass out with a four-year, $38.8 million deal that made some of Kelly Dwyer's tender parts shrivel and die. That's a lot of years and a lot of money for a rapidly declining 30-year-old who shot 31 percent on threes last season and compiled a Player Efficiency Rating of 10.9 in 10 playoff games. According to this handy reference guide, that PER puts him somewhere between "scrounging for minutes" and "definitely renting."

Of course, ESPN's John Hollinger explained that Jefferson's new contract actually saves the Spurs a Shaqload of money this season, which means the whole thing kinda-sorta makes sense until you remember that they're still going pay Jefferson almost $40 million over the next four seasons.

So how did Jefferson celebrate this wonderful manna from heaven? By going on vacation with his homeboys of course! From MediaTakeOut via Basketbawful reader anne: 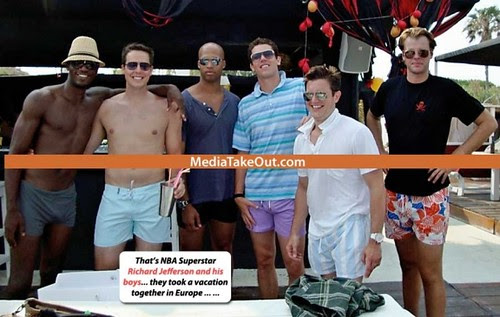 Okay, seriously: What's with the bulges? Because unless
this picture was taken by a naked Scarlett Johansson...
In case the image above caused irreparable damage to your optic nerves, I should point out that it also features Kareem Rush, former University of Missouri basketball player and son of Nuggets Owner Josh Kroenke, Luke Walton -- Luke Walton wearing tiny purple shorts -- and two other men that should be beaten to death with heavy, wooden things.

MediaTakeOut described this pic as "Richard Jefferson and his boys looking sweeter than a bag of jellybeans." Personally, I think the group looks cuter than this Hello Kitty with Sky Blue Dolphin toy. But maybe that's just me.

Note: Apparently this pic made the rounds a few weeks ago. Doesn't matter. There's no expiration date for making fun of crap like this.

Siddarth Sharma said...
I never wear any shorts unless they cover my kneecaps. Some things should be left to the imagination.

Interesting contrast in the dress up of the guy on the right. A pirate logo on his shirt showing his reckless abandon and those fruity shorts showing his gay abandon. Although, the shorts do show his reckless fashion sense and lots of pirates were ambiguous so maybe the contrast of the two is more of a concurring factor.

Will said...
"Richard Jefferson and his boys looking sweeter than a bag of jellybeans." When they say "boys" are they talking about his friends or is that a euphemism?
8/25/2010 9:59 AM

Rian said...
A bit of homophobia seeping through here. The two dudes "beaten to death with heavy, wooden things"? Really? For dressing the way a lot of gay dudes dress when they go to the beach?

Moreover, who cares? John Amaechi isn't the only gay basketball player ever, you know. There are probably 5 in the NBA at any one time. Get over it.

Basketbawful said...
A bit of homophobia seeping through here. The two dudes "beaten to death with heavy, wooden things"? Really? For dressing the way a lot of gay dudes dress when they go to the beach?

Love it when people twist around other's intentions/words to suit their own agenda/complaint/soap box just so they have something to whine about.
There's more than just your way of viewing things.
8/25/2010 10:57 AM

Barry said...
Jefferson looks like that guy from the Matrix. And that little guy on the right scares me. Serial rapist smile going on, shirt unbuttoned just a little too much......like Sid, I´m also just trying to look away from Little Kareem.
8/25/2010 11:01 AM

Dan B. said...
All the white guys in the pic look like they were in "Weekend at Bernie's".

I don't know exactly why I thought this was so funny, but this comment just cracked my shit up. Maybe it's the four hours of sleep I got last night. Or maybe it's just the thought that when I go to lunch in a few minutes, it's vaguely possible that Andrew McCarthy or Jonathan Silverman will be working the cash register.
8/25/2010 11:11 AM

chris said...
Dan: It's truly sad that I know people older than me that did not get my "Weekend at Bernie's" reference a few weeks ago.

Raymond Blitzfucker said...
There is one thing missing in this picture - Wally Szczerbiak wearing his parka commando.
8/25/2010 2:39 PM

Siddarth Sharma said...
Just noticed. The second from left is holding a glass, with multiple straws. So they were all drinking from the same glass at the same time. Evidence of some bro drinking ritual perhaps.
8/26/2010 10:31 AM
Post a Comment
<< Home
Subscribe
RSS Feed
Mailing List