To nobody's surprise, there is yet another story about the Wade/LeBron/Bosh situation on an NBA website. This Tim Povtak article on NBA Fanhouse is another example of some of your generic "this Heat team will be really good" fare. However, what's this?

Editor's Note: Because of a transcription error, an earlier version of this story contained an incorrect quote from Dwyane Wade. The full and accurate version of the quote is contained in this story. We deeply regret the error.

Wait, what? What could be so bad?

Courtesy of tweet by Pete Gaines, here is a screen capture of the original story: 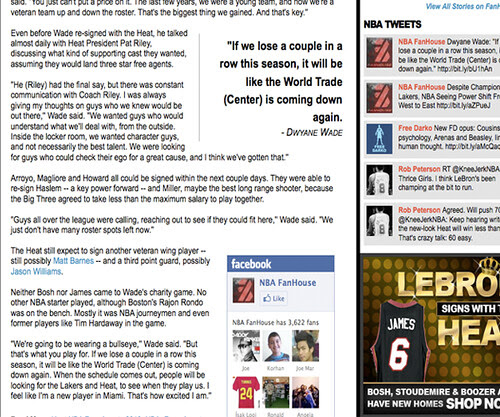 ...Okay then. Wow. Way to be sensitive there, D-Wade. I think the national Terror Alert Level just went up from yellow to a-kinda-sorta-orangey-yellow. And I'm sure conspiracy theorists have already decided D-Wade was somehow involved in the September 11th attacks.

So, Fanhouse claimed there was a "transcription error." Not really sure how you can have a transcription error that egregious slip through the editors, but let's give them the benefit of the doubt. So what was the actual quote, NBA Fanhouse?

"Plus, there's going to be times when we lose 2-3 games in a row, and it seems like the world has crashed down. You all are going to make it seem like the World Trade is coming down again, but it's not going to be nothing but a couple basketball games."

Oh, because that's so much better without the parenthetical "(Center)."

zyth said...
even MJ is against lebrons decision .
so, you kind of wonder, does lebron, who oft reminded us of his adoration towards Jordan, does feel a slight pinch?
7/19/2010 8:10 AM

Unknown said...
zyth, good point. to obviously lebron has enough love for himself, to make up for any insecurities.

and yeah...the d.wade "misquote" was stupid to begin with.

but again: reporters keep asking every player they can about this, so they can change it up and turn it in to a hate story concerning the miami heat. that's probably why they (SLAM) asked ray allen (one of the most professional guys around) about it, and turned it into ray allen sounding like he doesn't give a shit that two of the leagues best 3 players are on the same team.

if lebron signed for another couple of years with someone else or cleveland, he risked the chance at failure again and eventually people would write him off as a disspointment. this way, he probably figured that the lebron fans will always defend him saying he probably "could've" won even without wade. but in his eyes, wade and bosh is a guaranteed ring.

LotharBot said...
DWhistle invoking the WTC was stupid, but the overall point is correct: there will be times when they lose a few games in a row, and pundits will act like it's an unforseen catastrophe, but really it's just a couple of basketball games. They're going to lose a few this year, perhaps even *gasp* in a row, so let's not act like it's some huge tragedy when it happens.
7/19/2010 1:43 PM

Czernobog said...
OK, maybe my Israeli psyche is a little too jaded when it comes to Terrorism, but I see not a single thing wrong with the amended quote.
7/19/2010 7:02 PM

Ignarus said...
the misquote was that wade was supposedly saying that it WAS going to be like the trade centers falling, where he actually was saying the MEDIA was going to portray it that way.

it's a big difference; wade was saying that whatever happens with his team WON'T be anything like 9/11, but that the media is likely to hugely overreact. he wasn't saying that it actually was going to be that big of a deal, as he was quoted as saying.

Dan B. said...
Ignarus -- Sorry, I guess I didn't make that particular joke obvious enough. I thought it was funny that they would change that parenthetical part of the quote as well when editing it, when removing the parenthetical actually just made it ever so slightly more difficult to understand.
7/20/2010 6:48 AM
Post a Comment
<< Home
Subscribe
RSS Feed
Mailing List