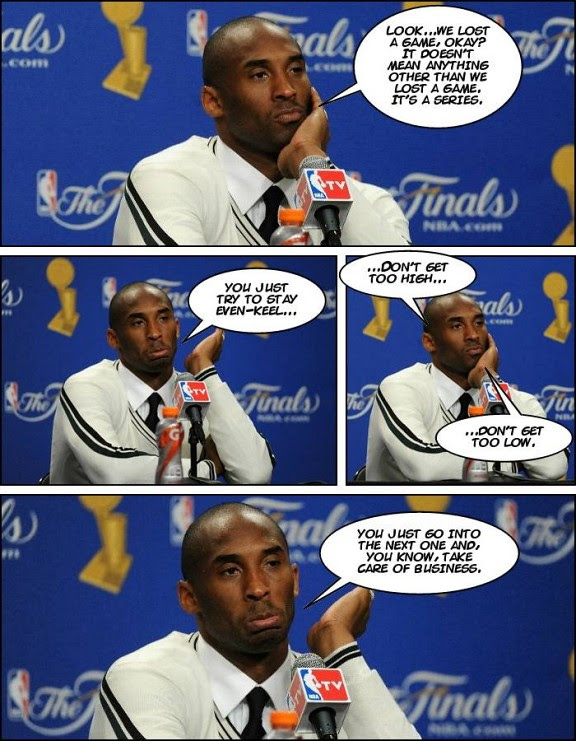 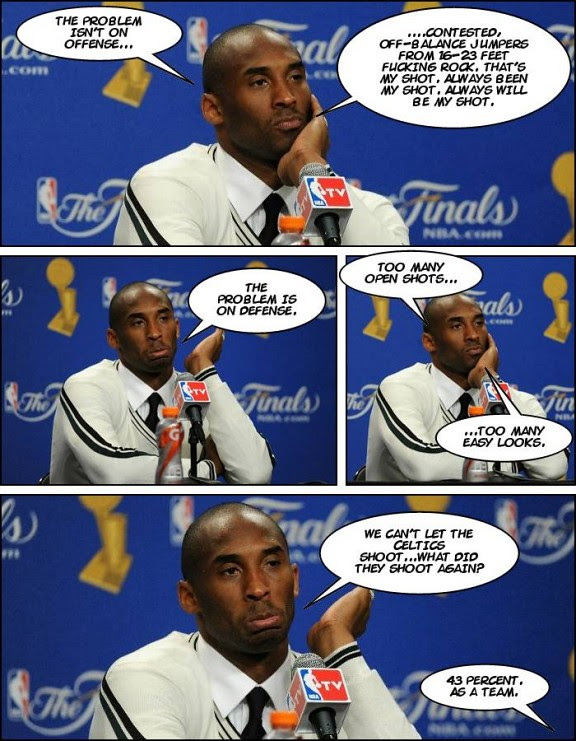 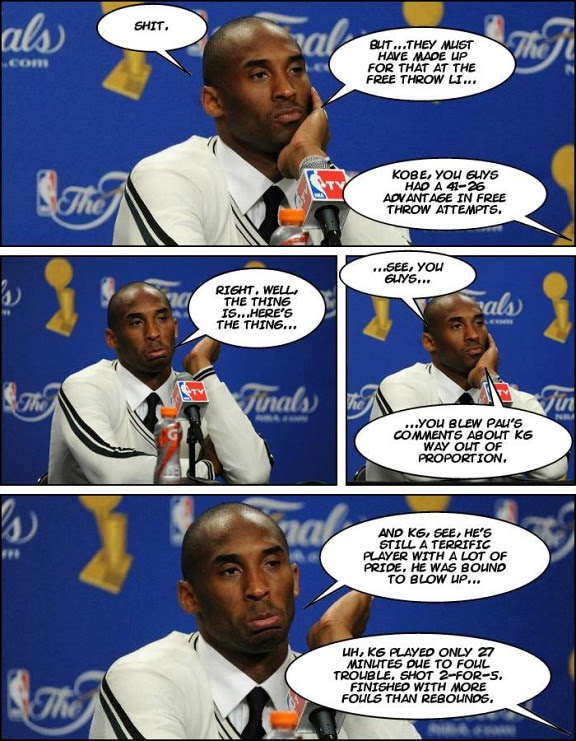 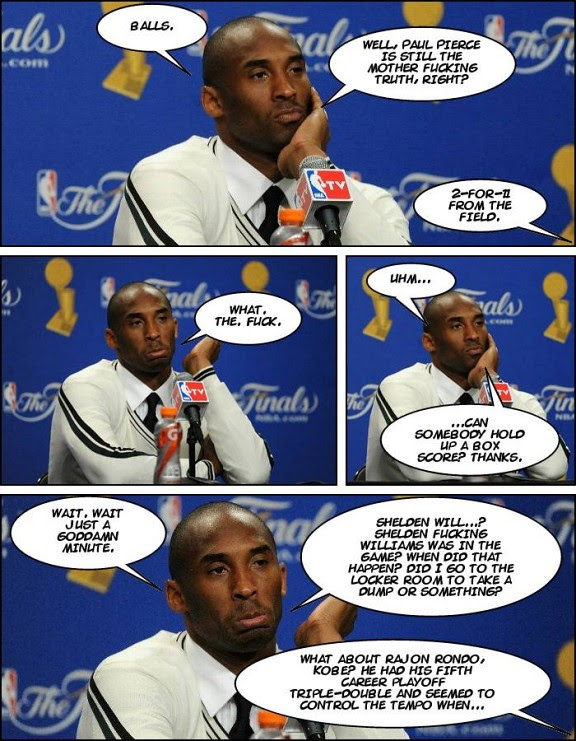 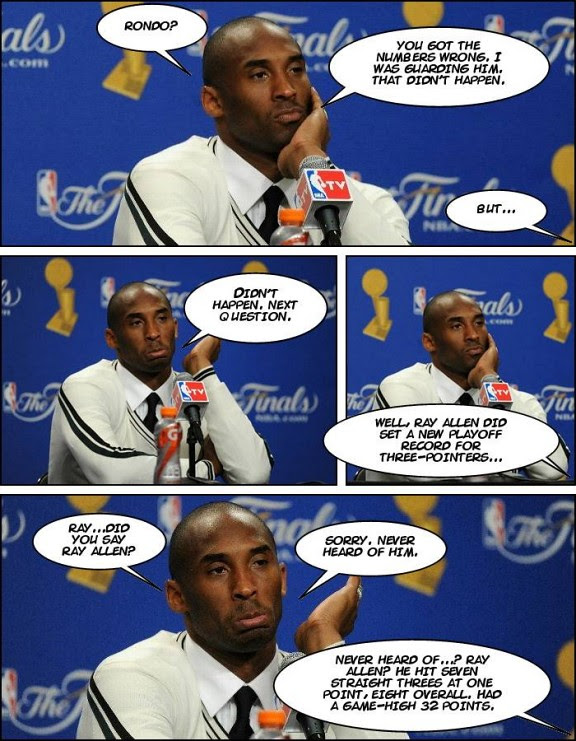 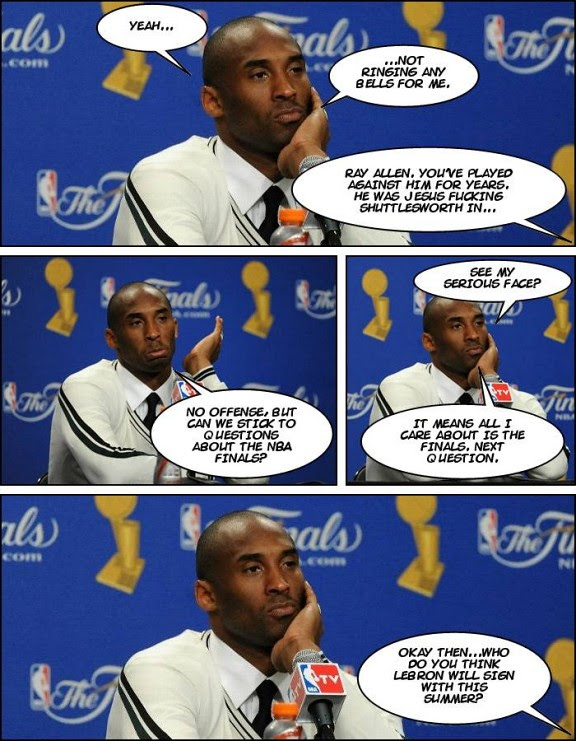 Basketbawful said...
Bawful- you should do a LeBron free agency comic strip press conference after the Finals (or at least a SVG comic for old-times' sake).

AnacondaHL said...
It has to be something different than the Free Agent Summit transcription though.
6/08/2010 10:01 AM

Basketbawful said...
It has to be something different than the Free Agent Summit transcription though.

14 blocked shots (11 more than the Cs) and 8 steals isn't exactly matador defense.
The Lakers missed 17 3point attempts and many were decent looks.

So what I'm saying is that although defense sure is indispensable it is not all about defense. Defense and offense wins championships.

Or maybe offense wins championships. The Miami Heat players were drunk all the time when they won their championship.
6/08/2010 10:09 AM

Dooj said...
Awesome. I also second Anaconda about SVG. He deserves a strip of his own.

Dan B. said...
Vasco -- It sounded like you were taking a Don Nelson "all offense all the time! screw defense!" approach in your other post. And my point was just that good defense creates good offense in most cases. The Lakers defense wasn't that bad at all in Game 2. Except for, you know, playing so far off Rondo the entire game and ignoring Ray Allen behind the arc the entire first half.
6/08/2010 10:21 AM

Anonymous said...
I forgot about these. Fantastic.
You never know what you have until you don't have it for a while and then Bawful brings it back and you are like "Oh yeah I love these", "Where the hell have these been?" and then they remind you of when Bawful would post a WotN w/ some random hilarious thing that Kobe "did" mostly to Luke Walton. Then you think you should post a comment and let everyone know what you think.
6/08/2010 10:40 AM

@huynhjeff said...
They're back! These have always been gold. I sound like an idiot chuckling in the office at this.

The expectations are now high for that Lebron one. Though I'm guessing it won't be hard, his overall attitude makes me laugh.
6/08/2010 12:45 PM

Will said...
Bawful- for the LeBron one, I suggest mixing in real quotes with made up ones and letting us figure out which is which.
WV: phoos- Mr T. pities the phoos who don't think these comics are hilarious.
6/08/2010 1:48 PM

Basketbawful said...
Bawful- for the LeBron one, I suggest mixing in real quotes with made up ones and letting us figure out which is which.

That's usually what I do. This one started out with slight variations of Kobe's post-game quotes from Game 2 (you can read them in the WotN entry). I like to use real quotes as a springboard for the jokes.
6/08/2010 1:59 PM

Unknown said...
I am a die hard lakers fan, but this comic thing was still pretty funny~

kobe can definitely be a prick~ especially if you go see him in real life~ but cant deny hes work ethic and dedication to the game and winning... if knee-mac or vag carter even had half of kobe's fire..

game 3's going to be interesting~ i think the refs are finally going to let them play... and we'll see if bawful's theory about loose calls favoring celts holds true, it ll be interesting to see~ esp with laker frontline beasting and KG playing like a corpse.

AK Dave said...
"See, that's the beauty of all this. I'm not 'saying' anything. I let the winning do all of the talking."

Fucking awesome. H/T to AnacondaHL for posting the link to that one. I was thinking the same thing as I read today's post: "where is that other Kobe comic post that had me in stitches last year?"

Someone said on here earlier that Izzo should stay at M. State. I couldn't agree more. The man is a fucking legend in college, and he obviously has it made there in East Lancing. They are naming streets and babies after him for god's sake. I know the NBA money is good, but give me 3million/year and the eternal love of a faithful fan base in a system I know I can succeed in over 6mil/year in a volatile industry with fair-weather fans in an even-crappier city and Delonte West any day of the week.

Guys like Izzo and Krzyzyzyczyeczyski need to stay put. For their own good and for the good of the college game. It really is lose-lose if they go.
6/08/2010 2:30 PM

Basketbawful said...
H/T to AnacondaHL for posting the link to that one.

chris said...
Bawful: To quote Emily Haines, "if it looks like winning...you haven't been."