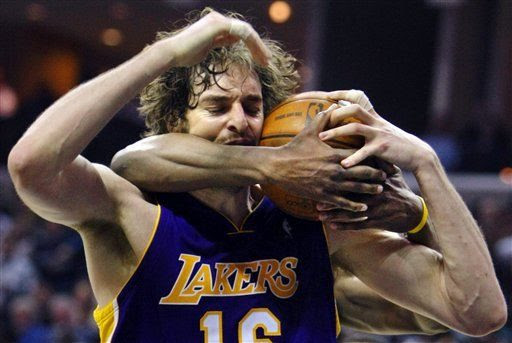 Ball.
To start your evening, go check out this link. Now. Do it. It's Brian Scalabrine getting a spray tan (which we will get to see in action tomorrow night!). (Thanks to JE Skeets for passing that link along on his Twitter feed)

We all know the Kings Purple Paupers are a mess. Remember when Excremento was playing .500 ball for several weeks? Now they're only slightly better than the Nyets. Coach Paul Westphal has taken a little heat from his players about this, and now he's bullying Spencer Hawes, while Tyreke Evans gets off scot-free, even though he had much harsher words for Coach Westphal. Great way to build team chemistry and improve morale, Coach!

The fine folks over at Cowbell Kingdom have put together a recreation of just how this conversation may have gone down. Take a look: 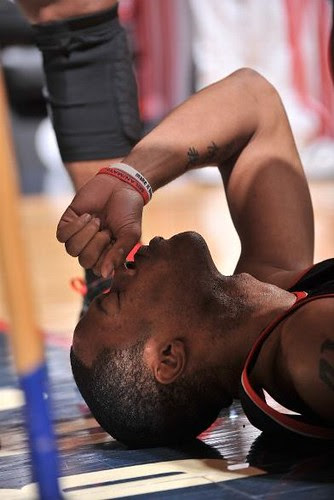 I guess the good news is that he only sprained the ankle instead of turning it into a fine paste of shattered bone and shredded ligaments. So he's got that going for him, which is nice. 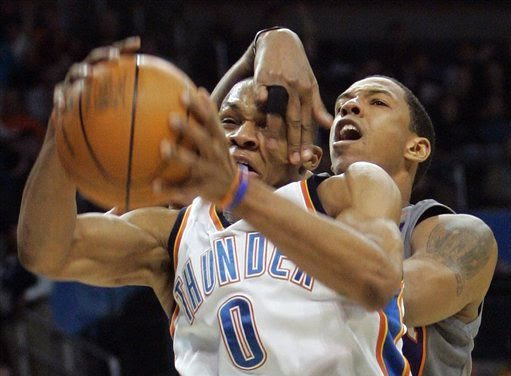 The last time I saw someone get violated like this, it involved Carl and Hand Banana. 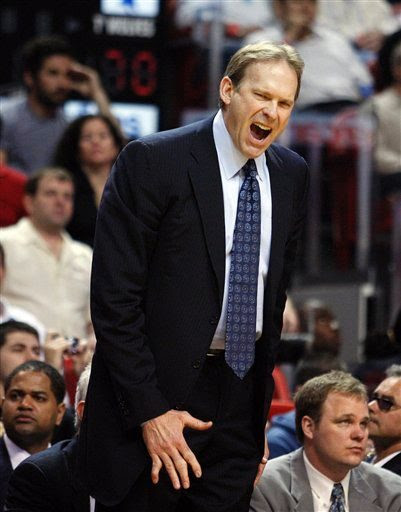 Woah! That hand is even more screwed up than mine!! 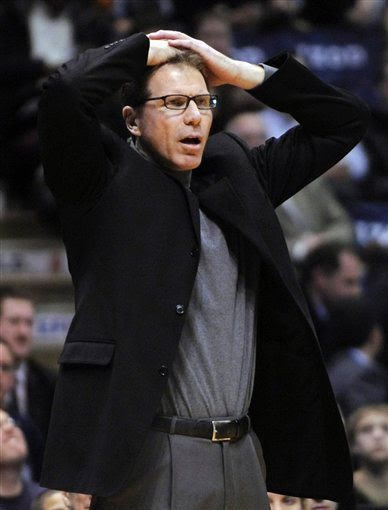 "Oh my God. I see this team every day and even I can't believe what I'm seeing." 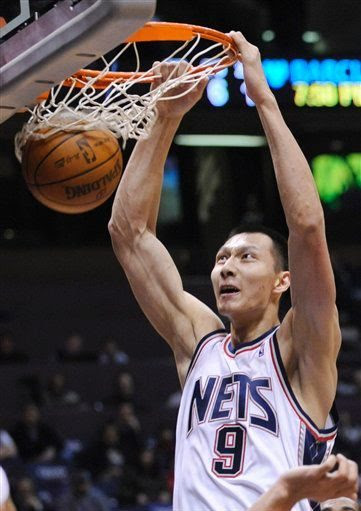 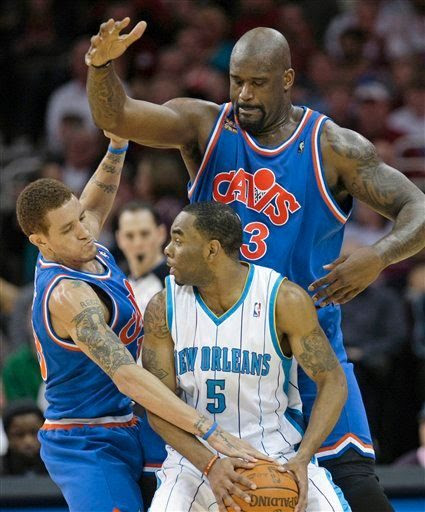 Shaq is one gigantic human being. That is all. 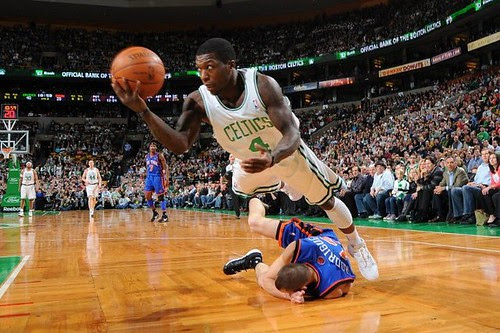 Sergio Rodriguez gives us another example of dying slug defense
Nationally Televised Games:
Lakers at Mavericks: Well, Kobe hit another game-winning dagger. Now he can be a SWAC for the next few games and the Laker faithfuls won't mind that much.

All The Other Games:
Timberwolves at Hawks: Sure, the Timberpoops beat the Heat last night. But that's like beating up on a high school team since D-Wade was out, so shouldn't that only count as half a win or something?

Grizzlies at Wizards Generals Bullets: Tweet of the day: "Josh Howard will miss the season after tearing the anterior cruciate ligament. Once again, he has a problem with his joints." Damn. Totally kicking myself right now for not thinking of that joke.

Frail Blazers at Raptors: Last night, Chris texted me while I was at the bowling alley to let me know Camby was hurt, and the Curse of Bill Walton had struck again. I was most decidedly not incredulous. I mean, who didn't see this one coming? You can never fully wash off the stink of the Clippers, and being a big man on the Frail Blazers is like wearing a red shirt on Star Trek. No good can come from it.

Pacers at Bulls: Just go away, Pacers. You're too boring to make fun of, and not good enough to hate.

Hornets at Bucks: Brandon Jennings only went 1-of-9 from the field in a four point effort against the Bricks' defense on Monday. The Bricks!!

Magic at Rockets: FYI, Daryl Morey was on Bill Simmons' podcast earlier this week. Well worth a listen.

Thunder at Spurs: The Thunder had their win streak blown last night. A little good scheduling luck for the Spurs?

76ers at Suns: Well, the Suns managed to win last night in come-from-behind fashion on the road. Watch them blow this theoretically easy home game.

Bobcats at Jazz: As we know, the Bobcats get up for big games. This might actually be an entertaining one.

chris said...
That "oof" sound also can apply to any Purple Pauper fan, myself included, watching the Kings waste yet another year in the cellar.

No playoffs since Adelman left.

Basketbawful said...
That point you made about the win over the Heat being worth half an actual win made me think...we need to get AnacondaHL to create a matrix for how much wins versus each team is actually worth...
2/24/2010 3:58 PM

chris said...
Bawful: So any win against the Paupers and Nyets really should not be counted, while any loss to such turrible "teams" should be counted double!
2/24/2010 4:46 PM

Anonymous said...
I bet Spencer Hawes regularly wear a leather jerkin with a lace-up collar. He just seems like that kind of guy.
2/24/2010 6:20 PM

BW in Cleveland said...
How the Cavs got their Z back.

Anonymous said...
The Blazers are some kind of terrible vengeful joke. Its laughable... but they keep winning.

I've completed the Nets' new logo. It's pretty glorious, you may use it in tomorrow's post if you wish.

AnacondaHL said...
Also, I missed it Monday, but there's a new week of NBA Jam voting. GO EVERY DAY.

chris said...
So they showed a list of Kobe Bryant daggers on screen during the Lakers-Mavs broadcast.

I saw That Pauper Game listed there and sadly put my head against my arm in frustration.

AT LEAST it worked as stat curse time: right after that stat box came up, Mamba bricked an attempt at a game-tying shot with 30 to go or so. Yay!!!!

chris said...
Yep. Dirk just got asked by the ESPN gal, "You went to the Jay-Z concert last night. What was it like playing in front of Jay-Z and Beyonce."

Anonymous said...
I just took a look at brooke and robin lopez's stats....Robin's numbers are literally half of his brothers across the board, including the most important one, when gauging an accustomed bench player to a starter, minutes. Do you guys think if Robin was given starter minutes he could come class, in terms of rebounds and blocks? I'd be content if robin could average 16 ppg
2/25/2010 1:56 AM

chris said...
So both the Cedric Maxwell post here and Matt McHale: Technical Writer's latest at By The Horns got on Truehoop, nice!

Of course, I read the By The Horns comments, where they're talking about "don't panic after losing to the Bullets, we're 20-10 in our last 30..."

In other words, 20-10 since The Comeback, while the Paupers Who May Be In Vegas Two Years From Now are 5-25 since that exact point.

Preveen said...
I guess chris will be disappointed with this news
Cavs assign forward Jackson, swingman Green to Erie

jim said...
@winnetou: Seeing stat lines like that makes me cry for Brook. He tries so hard, and gets so little.

@bawful: I know it's been mentioned before, but the Failadelphia 76ers should get a permanent spot on WotN for Elton Brand's contract. He looks fat, slow, and entirely unskilled out there. Might this be the first time that leaving the Clippers brought on a curse?
2/25/2010 9:55 AM

GonzoPal said...
First comment since Dan joined the regulars, but mad love for the ATHF reference! And as an extra one of my alltime favorite episodes. "I want my name ta be Spaghetti..."
In more NBA related context, I´m still tryin to figure out what to think of my new Bulls squad. Thinking sth. like can get get along with it.
2/25/2010 11:09 AM