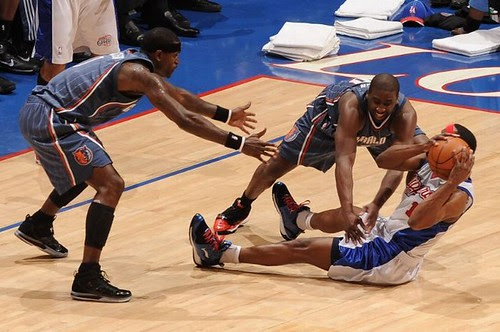 "Hey Baron, need a hand(job)?"
So, just four games into his career as a Bullet, and Josh Howard has torn his ACL and is out for the rest of the season. I can only assume he's currently furiously scouring the phone book looking for a shady doctor to hook him up with medicinal marijuana. Can you blame him? It takes a little while to fully recover from an ACL injury like this. The Bullets almost certainly won't pick up his $11mil option next season, so he'll be an unrestricted free agent, and who will want to spend money on an uncertain knee like this? Wait a second... this is the Bullets team. They'll probably resign him without second thought and try to find a way to give him more money.

But hey, at least his knee isn't made of bendy straws and painter's tape, unlike Tracy McGrady.

Also, we finally have definitive evidence as to exactly why the Kings suck: a decided lack of man-love! (Science!) 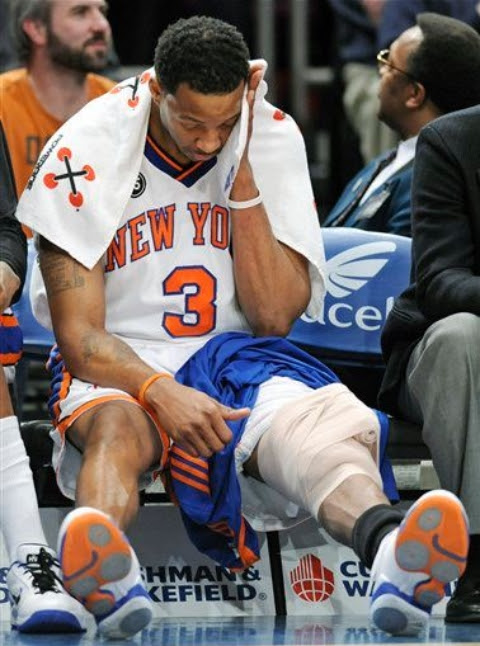 Yes, I fully realize we already posted this picture. That's not going to stop me from posting it again!! 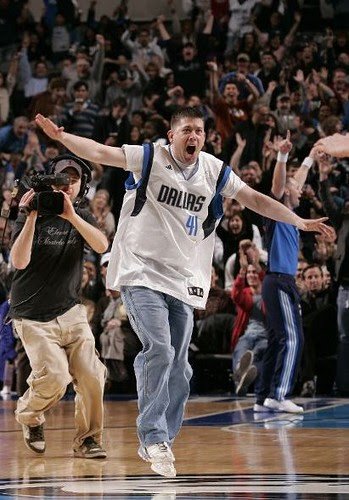 This fan hit a halfcourt shot for $10,000. Man, even the fans can score against the Pacers. 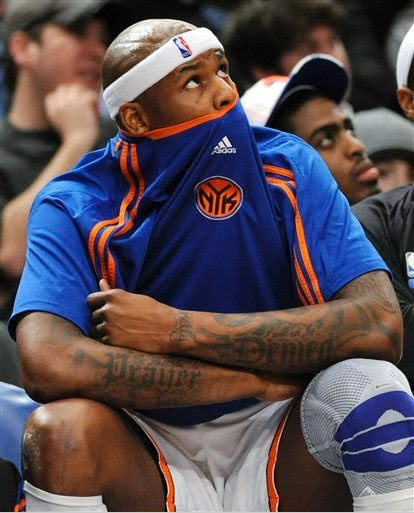 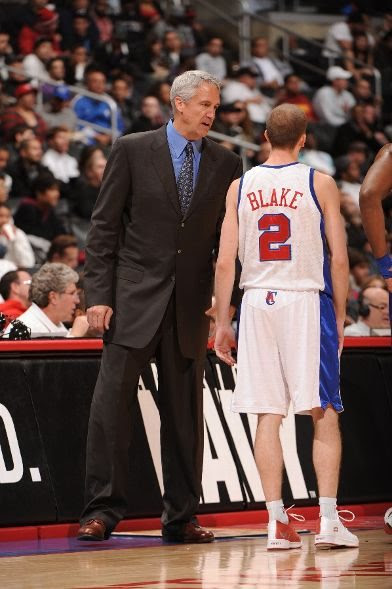 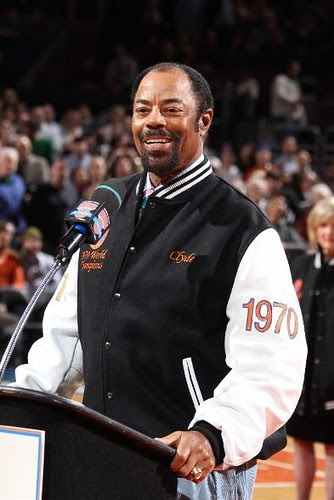 I'm just going to ask it -- where the hell is Keith Hernandez? 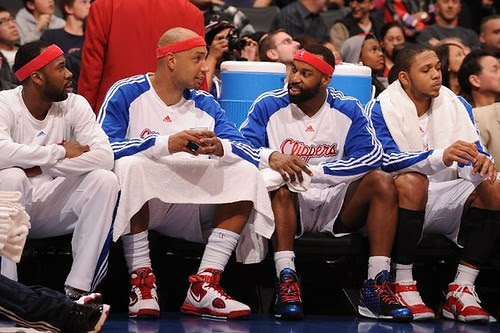 "Man, it's weird not having to hide under this towel in embarrassment!"
Nationally Televised Games:
Lakers at Grizzlies: Sigh. If only we could hop into that Hot Tub Time Machine and go back to a month or two ago. You know, before Memphis started to stink like a college dorm room mini-fridge at the end of the year.

All The Other Games:
Hornets at Crabs: Hopefully this game does something to settle the Darren Collison vs. Chris Paul debate. (If Collison keeps it up, could he be valuable trade bait in the summer? Hard to devalue him by keeping him as a backup if he keeps performing.)

Bricks at Celtics: Oh man. Nate Robinson in a revenge game against the Bricks? Knee-Mac is already hurt again? Woo! This is almost making me forget about how old and beat up the Celtics are!

Timberwolves at Heat: I feel about as confident about the Heat in this game as I did about the Bobcats last night.

Frail Blazers at Nyets: Ugh, the Nyets. Why don't they just replace the team logo with a picture of a facepalm?

Pistons at Kings: ...And this one brings us right back down to Earth with some super sloppy basketbawful.

NarSARSsist said...
I really hope they use that picture of Harrington's Prayer Denied tattoo when he tries to get the hell out of New York.
2/23/2010 4:22 PM

chris said...
NarSARSist: But aren't King Crab and Dwyane and everyone else who is a Marquee Free Agent coming to Manhattan in the Summer of 2010 Sweepstakes?!?!?!? That'll surely keep him there happily toiling away in the land of 'antoni, right!??!?
2/23/2010 4:33 PM

Anonymous said...
Timberpoops-Heat, Pistons-Paupers, Sixers-Wankers, Nyets-anyone. Is David Stern trying to break our wills? How can this much suckitude be generated in a single league?

And that man-love study as usual has it backwards: good teams with more confidence get along better. If you had show up to work as a Nyet, you'd be stewing in your own bitter cave of isolation too.
2/23/2010 4:34 PM

Ash said...
chris: Aw, it's so exciting rooting him on, though! You never know which Larry you'll get from game to game! Thrilling!

Now some "contender" will pick him up. Wouldn't it be hilarious to watch David Stern hand him a Larry O'Brien trophy? That'd be a Bawful In Pictures Instant Classic.
2/23/2010 5:45 PM

Marcus Camby (of all nights, while facing the Nyets) is the latest to suffer from the allergy of most big men to the whirlpool jerseys!!!!

When ESPN's NBA Coast to Coast calls it "the curse of Sam Bowie and Bill Walton," you know that the Frail Blazer medical staff must be pacing nervously right now at the news.
2/23/2010 9:21 PM

Basketbawful said...
ARE THE SUNS BETTER WITHOUT STEVE NASH??!

"They're going to go on to their tenth straight win" with about three minutes left, 98-88.

AWESOME job on finding that first pic and the caption XD Looks like Baron Davis has a monstrous, conical johnson.
2/24/2010 10:29 AM

Let me get this straight, Denver is 6-0 against the Lakers, Cavs, Magic and Celtics, but they are number 3 (losing only to a Wizards team that without all of the malcontents have started winning games). Meanwhile, the Lakers barely get by Memphis, lose to Boston, have not beaten Denver or Cleveland once this season, and are number 1?! Who writes this garbage?
2/24/2010 12:10 PM