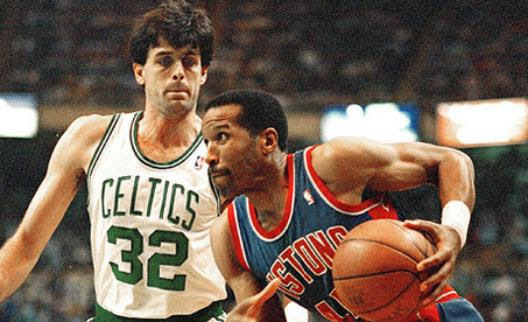 Dantley's about to draw the foul. And McHale knows it.
The Dantley (thuh dant'-lee) noun. Describes those performances in which a player scores a significant number of points and more than half of those points come from the foul line.

Usage example: Kobe Bryant had a Dantley in Game 1 of the Lakers' second round playoff series against the Jazz: 38 points on 8 field goals and 21 (out of 23) freethrows.

Word history: Bob Ryan invented the term (as noted in David Halberstam's Playing for Keeps: Michael Jordan and the World He Made) to describe how Adrian Dantley was able to ignite many of his famous scoring explosions from the foul line. Dantley scored 23177 over his 18-year ABA/NBA career, and 8351 of those points -- roughly 36 percent of them -- came from the charity stripe. He led the NBA in free throws four times (and was the league scoring champion during two of those seasons) and currently ranks sixth all-time in that category. He shares the record (with Wilt Chamberlain) for most free throws made in a regular-season NBA game (28). Dude straight up knew how to draw fouls. It helped that he could bulldoze his way to the basket with his giant ass (see below).

Unfortunately, basketball-reference.com doesn't provide box scores from A.D.'s heyday during the mid-80s, but even in the latter stages of his career, Dantley had some signature Dantleys left in him:

Word trivia: I thought that the 2006 NBA Finals would be the perfect place to find examples of The Dantley. After all, Dwyane Wade lived at the freethrow line, right? But I was surprised to discover that he did not have a single Dantley in that series. Yes, he received a ginormous number of freethrows, but he scored more points on field goals in every game. Seriously, go check the box scores.

Fun fact: According to his NBA.com bio, "As a 6-4, 245-pound freshman at DeMatha High School in Hyattsville, Maryland, his prodigious posterior earned him the nickname 'Baby Huey.'" I'm going to go ahead and assume he preferred "A.D."

A word of thanks: To faithful reader Nick F. (Buck Nasty) for the suggestion.

B-Will said...
Bawful, speaking of Wade, don't you think they will be an interesting team this year. I really think it is a traveshamockery that the bulls didn't pick up that beasley kid. Total beast. Also, did you know that Sean Livingston, D-Wade and Marion are all from Chicago. Not a bad Chicago three-some.
10/14/2008 11:46 AM

Basketbawful said...
brad -- First, yeah, I'm really interested to see how the Heat do this year. On the one hand, they're still pretty week at center and off the bench. However, with Wade, Marion and Beasley, they should be much improved from last year's 15-win squad. Plus, D-Wade was on fire during the Olympics. I hope it carries over. (Although he's dropping the ball a lot in the preseason...).

Second, I don't get, as in, I REALLY don't get, why the Bulls selected Rose over Beasley. I mean, yeah, they wanted the hometown kid with the potential to become a superstar, but the ONE thing they've been missing the last three seasons was an inside scorer. They had the other pieces. Now they have a glut of guards and (yet again) no inside presence. Maybe Rose will prove me wrong down the road, but the Bulls lost out in the short term.
10/14/2008 12:28 PM

ChrisH said...
Dantley, in the 88 finals vs LA, absolutely destroyed AC Green. In a lot of ways, he reminded me of McHale.. except he would pull out all sorts of nifty footwork while facing/driving the basket while McHale did his damage in the post with his back to it. I've searched for a good AD highlight reel on youtube but had no luck. I felt bad for him that the pistons traded him right before they got their 1st title. I bet he hates zeke.
10/14/2008 1:34 PM

Anonymous said...
I would be interested to know how many of D-Wade's points were "and-1" free throws. Yeah he scored more from the field than from the line, but he was getting "and-1's" if somebody brushed his shorts on the way to an uncontested layup. That will skew the statistics.

Case-in-point was that "foul" by Dirk to win game 3 or 4- not sure which one it was.

I never watched Dantley play- were his foul calls legit? Dwade's were mostly just crappy calls, but most NBA calls are crappy anyway. I wonder if Dantley was totally hardcore and tough or just a referee's sweetheart.
10/14/2008 1:38 PM

KNEE JERK NBA said...
Mark Aguirre was another relatively short dude with a huge ass who somehow managed to score in the paint over 7 footers.

Anonymous said...
What about what AnacondaHL suggested? I'd love a Basketbawful fantasy league (yahoo or wherever).

ChrisH said...
Dantley was very different from Wade. Wade had crazy quick bounciness. Dantley was 6'4 but too strong for guards to cover him. So he'd end up with a pf sticking him and he'd slice and dice until he lost the guy or had him so off balance trying to recover that he could draw contact and get a shot off. Plus they didnt call handchecking back then, in general, from what i remember, AD earned those fouls with his footwork.
10/14/2008 3:29 PM

B-Will said...
What other basketball players had huge buts. I have always been amazed at the size of Shaq's butt, I am not sure if it helped him. Is having a big butt a plus like long arms in basketball. I think having big hands is very important for basketball look at Ostertag the guy had the hands of a 12 year old girl.
10/14/2008 3:40 PM

Anonymous said...
Hey, nothing to do with the subject but... what game do you guys recommend?

kneejerknba -- Ah, Mark Aguirre. Also known as "Buffet" by his teammates. I guess the gigantic butt can be effective...but I'm gonna go ahead and go another route.

anonymousnupe -- Sounds like a story you need to tell here, my friend.

brad -- Hm. We'll have to invent a Giant Butt All-Star Team. Barkley would be on it...

stephanie g said...
Not only does Dantley have a huge butt, he has magnificent thunder thighs.

Brad: I don't know if their ass sizes are unusual, but Charles Barkley and (to a lesser extent) Mark Jackson had the most dominant posteriors in NBA history. The league had to make the five second rule to stop them.
10/14/2008 4:12 PM

Basketbawful said...
stephanie g -- Damn it! I was going to list Mark!

David said...
Full Disclosure - I'm a Heat homer who is obviously somewhat biased when it comes to this matter.... But it gets tiresome hearing about Wade's ref charity in 2006.

Yes, there were some bad calls, but he deserved most of those free throws.

He used a disproportionate number of Heat possessions and played with his usual ridiculous aggressiveness. That's going to result in a lot of free throws in NBA basketball - bad officiating or not.
10/14/2008 7:52 PM

David said...
"Second, I don't get, as in, I REALLY don't get, why the Bulls selected Rose over Beasley. I mean, yeah, they wanted the hometown kid with the potential to become a superstar, but the ONE thing they've been missing the last three seasons was an inside scorer. They had the other pieces. "

My instantaneous reaction when the Bulls logo wasn't in their envelope on lottery night was that they'd take Beasley or Lopez (depending on position). They so obviously needed a post scorer. Doing anything else didn't seem logical.

anonymousnupe said...
I attended Hampton University (Institute back then) with one of the most ample and effective butts in the NBA. It was attached to Rick Mahorn.

Oh, Dantley used to play in the area (D.C./Maryland) when he was home from the NBA. I've been on the court with him--but never on his team, unfortunately--on at least three occasions back in the day. Even drank from the same water fountain. He even played outdoors sometimes. Man, that dude's workout regimen was legendary 'round here. He was unstoppable. By many local accounts he's the second best baller to ever come out of D.C. area high schools, right after Elgin Baylor and just ahead of Dave Bing. At least that's what they say.
10/14/2008 9:58 PM

I would be interested to know how many of D-Wade's points were "and-1" free throws. Yeah he scored more from the field than from the line, but he was getting "and-1's" if somebody brushed his shorts on the way to an uncontested layup. That will skew the statistics.

Case-in-point was that "foul" by Dirk to win game 3 or 4- not sure which one it was.


I am so sick of everyone talking about the Dirk foul at the end of game 5. I was sitting about 8 feet away when that play happened (1st row to the left of the basket near the Mavs bench) and the only thing wrong with that call was that the foul was on Devin Harris. Here is the photo to prove it:

C. Weatherspoon would fit your BigButt Bench imo, and maybe even could be secret weapon cause he was sort of underestimated all the time.

Anonymous said...
Starbury went for 6 assists and how many dimes? hehehehe

Barry said...
All this ass-watching is slightly dubious.

Anonymous said...
I think Kevin Martin is trying to become a modern Dantley last year he had games of

K.A. said...
prodigious posterior is fucking brilliant. i think its no coincidence that another great PF that was short also had a big ass: sir charles. round mound: DO NOT WANT.
10/17/2008 1:59 AM