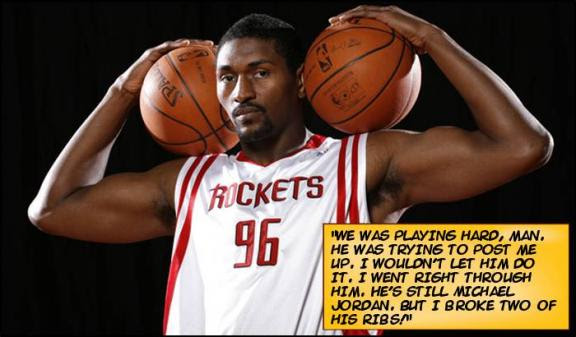 Important reminder! Check out my season preview for the Boston Celtics on Deadspin.

Anonymous said...
I don't really get the whole Tao of Ron Artest thing. It's the first thing that's lacked in comedy value. I love the "First Time Since '69" thing.

The more Bill Walton the better I say.

"The ghosts of the Garden......I KNOW THEY'LL GET US THROUGH! No one can stop McHale comes from the land of lakes, long arms, got a thousand moves, lookout he's in the grove. Larry Bird. LAAAAAAAAAAAAAARYYYYYY BIIIIIIRRRRRRD."

lindsey -- He did indeed. He busted up Mike's ribs in a pickup game the summer before Mike's comeback with the Wizards. And, apparently, he was freaking thrilled about it.
10/03/2008 5:08 AM

Anonymous said...
From a friend of mine after reading this post:

Anonymous said...
Not much better than TruWarier dropping wisdom. Once read something (maybe here?) about a talk he gave to children of divorcing/divorced parents where he said, "Don't be thinking about your parents' feelings, cuz they're not thinking about yours."