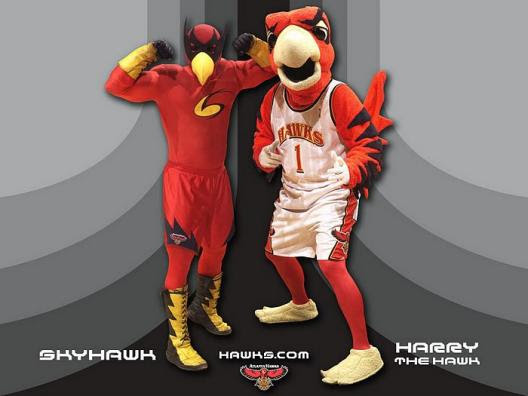 This is my entry for the 2008-2009 blogger preview series organized by CelticsBlog. You can get the full list and schedule of previews here. Note that I offered to preview whichever team no one else wanted to preview. This is that team...

Last Year's Record: Finished 37-45, third in the Southeast Division and eighth in the East.

1. What significant moves were made during the offseason? Josh Smith -- the team's second-leading scorer (17.2) and rebounder (8.2) -- re-signed for $58 million over the summer. (But only after signing an offer sheet to play with the Memphis Grizzlies.) Maurice Evans was brought in to replace Josh Childress. (Good luck with that, guys.) The Hawks also tried to add some front court depth with the acquisitions of Randolph Morris and Othello Hunter. (The key word here being "tried.")

2. What are the team's biggest strengths? Their starting five of Mike Bibby, Joe Johnson, Marvin Williams, Smith and Al Horford is solid (particularly in the East). And Bibby -- whose "sore thumb" is fully healed -- has now been through training camp with his 'mates and should be fully integrated into Mike Woodson's offensive and defensive schemes. This should lead to improved chemistry, especially with backcourt buddy Joe Johnson, and hopefully a general improvement in team defense (which definitely de-improved after Bibs was acquired last February). They're an "energy" team that can push the tempo and crash the offensive boards. They play really tough at home, where some actual fans were sighted last season, along with at least one Bigfoot. (However, one or both sightings might have been a hoax.) Their confidence is sky high after the way they "pushed" the Celtics in the first round of last year's playoffs.

3. What are the team's biggest weaknesses? Losing Josh Childress will affect the Hawks both on the basketball court and [insert Bill Walton voice here] on the court of the mind. Smith might still be a little bitter over how his contract negotiations were handled. (He had to sign an offer sheet with the Grizzlies for God's sake.) Their bench is about as deep as a puddle on a 98-degree day. Offensively, they're very inconsistent due to their "on again, off again" running game and streaky jump shooting. (Johnson, the team's leading scorer, hit only 43 percent of his field goals in 2007-08.) Their three-point marksmanship is herbal tea weak (35 percent as a team last season). In fact, their best shooter is Mark Price. Assistant coach Mark Price, that is. They don't always go all-out, especially on the road, where they were 12-29 last season. They seem to be thinking a little too highly of themselves right now, due mostly to that first-round slugfest with Boston (more on this below).

4. What are the goals for this team? They need to avoid complacency and build on the momentum they sparked at the end of last season when they were fighting tooth and nail to make the playoffs. They also need to reestablish the defensive mindset they started the 2007-08 campaign with. And, most importantly, they need to stay focused and go full-tilt every game. Their starting five is solid but not great, they lack depth, and -- no offense to Joe Johnson -- they don't have a superstar in tow. This means that anything less than 100 percent effort can and will doom them on any given night.

5. Are they simply a one-season tease? We've all seen it before. A team gets hot at the end of the regular season, sneaks into the playoffs, makes some noise, and so everybody expects them to take The Next Big Step next season. But when said team is flawed -- as the Hawks are -- this often leads to overconfidence and failed expectations. The most recent example of this is the Golden State Warriors. The 2007-08 Warriors may have won a few more games than the 2006-07 Warriors, but they failed to recapture the magic of that '07 playoff run. I think we're going to see the same thing happen to the Hawks this season. Especially since that seven-game series with the Celtics wasn't as close as everybody seems to think: The champs absolutely crushed them in Boston whereas the Hawks pulled out three could-have-gone-either-way victories at home.

Anonymous said...
"Their starting five is solid but not great, they lack depth, and -- no offense to Joe Smith -- they don't have a superstar in tow."

Anonymous said...
You realize that "Skyhawk" is now the lamest scariest unintentionally funny and on many levels most disturbing mascot i've ever seen...

Anonymous said...
It takes a lot of self-loathing to get yourself into a costume like that.