Basketbawful reader Evon, a denizen of Portland, received a jolt of stunnedocity when he discovered the following advertisement in his Sunday paper. 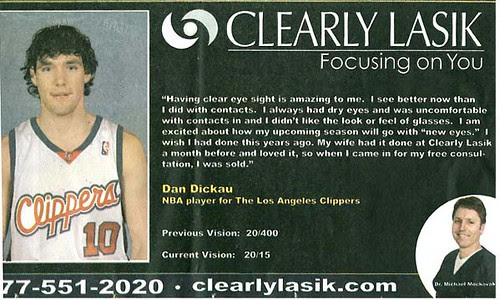 I think I speak for everyone who follows the NBA when I say that I too am excited to see how Dan's upcoming season goes with his "new eyes." Although eight-year veterans who are six feet small and have a career average of 5.8 PPG don't usually have breakout years, even if their "new eyes" shoot laser beams.

On the one hand, it seems like a waste to use an unknown journeyman to advertise your eye correction business, but it's actually sort of a stroke of brilliance. Instead of spending their entire marketing budget on, say, Greg Oden, the good people at Clearly Lasik can spend $50 on Dan's endorsement and the rest of their cash on inventing those cool laser-blasting eyes I was talking about. One day, in the not-to-distant future, I may be able to have 20/20 vision and fight crime.

(I'm kidding of course. I would use my amazing ocular powers for evil.)

Anonymous said...
In their defense, Dickau's a local boy. Played high school ball in Vancouver, WA, just across the border from Portland, OR. I'm guessing they thought that might justify the decision?

And laser vision in the NBA would rawk. You'd have at least a full season before the rules committee could outlaw it, and by that time you've probably already melted the corneas of most the opposing defenders.
8/07/2008 3:15 PM

Anonymous said...
What? Why is this thread about a basketball player? This isn't a gay issues/porn site anymore? Bummer.

Also this is PG4L but stupid Google isn't accepting my password and I'm tired of logging in to type pithy insults under my own name. Seriously this software has lost my password twice now. UN-Impressed.
8/07/2008 7:08 PM

Anonymous said...
Channing Frye also had lasik done, and also had the monitor of the surgery recorded and posted on his blog.

Anonymous said...
This reminds me - I'm from the Portland area as well, and sometime last year, I saw a Clearly Lasik ad in a movie theater during the Regal First Look pre-show ads. It was one of those cheap local ads where a slide is shown for a minute and then there's some music or talking or both in the background.

Anyways, the slide had a photo of Dickau playing in a game on the left, and the company's information on the right, and Dickau's voice was heard, with the exact same quote in the ad.
8/08/2008 6:47 AM

He maybe a bum in the league but he would show up to any gym we play at and dominate without any issue what...so...ever, period.

The only risk in using him is the inherent stupidity that is rampant throughout the U.S. of A. whereas it is entirely possible that someone would dismiss the vision of an eight year NBA vet as a non issue.

Anonymous said...
Beyond being a local, Dickau has also been on the Blazer's roster twice and retains some level of local popularity despite everybody knowing how bad he is. Honestly, as far as cheap endorsements go it actually makes sense, and they're advertising in the one market where Dickau probably has any "star power."
8/08/2008 3:29 PM

Anonymous said...
I have this picture of Dan looking in the mirror the first time and saying, "Yikes! I'm ugly!"

But seriously, I'm sure he didn't have vision that poor in both eyes, but only one. I have pretty good vision in one eye, but the other is totally screwed up. Getting the poor one corrected (and the good one improved?) could significantly improve depth perception.

Shiv said...
Seriously? 20/400. I'm supremely impressed the guy managed to even make it to the NBA, let alone average 5.8ppg as a pass-first PG. Let's see how well he does now that he can actually SEE the bucket and his teammates with his new x-ray vision esque 20/15.

Anonymous said...
You realize that after Shiv's comment I've actually started telling myself an imaginary story about a last chance white PG who suddenly realizes that the reason he can barely hang on in the league is that he's near legally blind. After laser surgery he dominates the league for a while, gets a new girlfriend who truly loves him for who he is (and happened to go to his HS to boot). Everything is going great until he lets fame go to his head falls in with a bad crowd. He's arrested after punching out an obnoxious fan at an all night peep booth establishment (you know, the kind where $2 gets you half a song) causing his embarassed HS sweet heart to dump him and his mom to move back home to but-f noplace... Eventually though he fires his agent, tells his entourage to leave him alone, gives up the drugs and calls his mom again. After winning his life back the movie ends with him about to return to the court...

I'd call it the "PacmanJonesChrisAndersonDanDickau Story"

or "Make it Rain"