Tuesday, August 12, 2008
LeBron versus Jalen: The Untold Story
By Basketbawful at 7:29 AM
9 comments 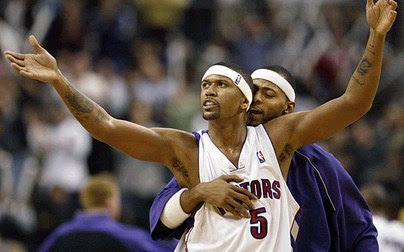 Basketbawful reader Herman has shared a number of particularly amusing stories regarding his former job (see below). This may well be my favorite:

I used to work at the Air Canada Centre as a vendor. I used to show up early and try and talk to the players, when security didn't stop me.

One day I was hanging around the court, and I was trying to talk with Mike James. He had to run back to the locker room, so I decided to head back up the elevator to the main floor. As the doors are closing, I hear someone go "Hey, hold the door!", so I do. Lo and behold, Jalen Rose walks into the elevator. I start talking to him about Toronto, and living here, and generally joking around. He was really friendly. We start talking about the game that night (it was against the Cavs).

Me (joking): You think you can outscore LeBron?

Me: Okay, five bucks says that Bron outscores you.

That, of course, was the night that LeBron scored 50 for the first time. The next week, I walk into the office, when my boss tells me there's some mail for me here. It's an envelope addressed to "that smartass vendor", and inside, there's a five dollar bill.

I've been a Jalen fan ever since.

Some interesting sidenotes to the game in question. King James scored 56 points on 18-for-36 shooting. He also hit six of his 12 three-point attempts and 14 of his 15 freethrows. But, whatever you might think, it's not like Jalen just rolled over: Rose dropped 30 (12-for-23) and added 7 rebounds, 3 assists and 3 steals. More importantly, the Raptors won 105-98. So sure, Jalen might have lost the scoring battle and the five bucks...but he won The War.

shayan said...
I LOVED Jalen Rose as a Raptor. I remember when we got him (I live in Toronto) there was a lot of speculation about his "character" and so called "troubled past" with his former teams, but anyone could tell that was all bs once they saw him in an interview. Sure, he didn't play great defense, but he was one hell of a scorer, and one thing that really stood out that people might not know about him: dude is HILARIOUS. He's got to be in the list of funniest quotes of all time from NBA players.
8/12/2008 10:46 AM

m. Alana said...
A) I knew there was a reason I loved Jalen Rose.

B) That picture amuses me, but not for the reasons you think it does. It makes me wonder what exactly Mo Pete is saying to Jalen. "Yessss...you can celebrate now, Rose, but remember this moment tonight when you check your children's beds. Muahahaha."

Anonymous said...
Kind of a strange story, considering the ride in the elevator from floor level to the first level of ACC lasts all of about 5 seconds. Also, where the vendors go and where the players go are in entirely different areas....areas that are secured at 8am on game days.
8/13/2008 6:08 AM

Anonymous said...
hah! a player just called you a "smartass" and gave you five bucks and you became a fan!?