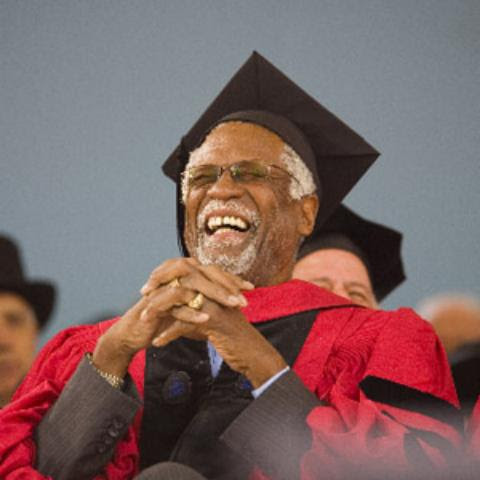 Back in the 1960s, professional athletes didn't have blogs...but they did have Sports Illustrated. Guys like Bill Russell, Tommy Heinsohn and Wilt Chamberlain (among others) wrote various first-person articles for SI describing (for instance) the psychology of the game, how to run Red Auerbach's seven plays and why it sucks to be The Villain. In October of 1965, Russell authored a piece called The Psych...And My Other Tricks. Russell refers to this as his "master's thesis on The Psychology of Basketball, or How I Learned to Stop Worrying and Spook the Opposition."

In the article, Russell details the various mindgames that he and the other Celtics used against their opponents. Running underneath a jump shooter (without touching him), pretending to be tired when you're not, acting like you're fresh when you're actually exhausted, asking a hotshot player why he's not getting more shots...things like that. He also talks about how playing angry and becoming overconfident can hurt your game. (Yes, I'm looking at you, Paul Pierce.)

At point, Russ says: "You say these are minor league tricks? Maybe. But you'd be surprised at how often they work." And it's true. I can't speak for professional players, obviously, but a lot of these schemes work in pickup ball. For instance, in addition to hoops I also run half-marathons. And I make sure the people I play with know this. It creates an image in their mind of a tireless opponent. I try to enhance this image by never, ever breathing heavily during a game...no matter how tired I am. I can't tell you how many times I've heard a defender tell me something like, "Man, you never get tired" or "There's no way I can keep up with you." And as soon as they say that, I know I've got 'em.

Similarly, I try to never react to negative plays. Many times when a guy is missing shots or getting them blocked, he starts showing signs of frustration, hanging his head, cussing, swiping a fist through the air. That always gives the defender a boost, and when the man I'm guarding starts acting out, that's when I turn up the pressure to make him crack or give up. Conversely, I try (although I'm not always successful) to never look down or rattled no matter how many shots I've missed, or how ugly a turnover I just committed, or how violently my shot just got blocked. Otherwise, you've given your defender an edge.

One other scheme -- and I try to avoid this one, personally -- is to fake an injury. For instance, how many times have you seen a guy limping around on defense only to blast off downcourt as soon as his team gets the ball back. This tactic dupes the man he's playing against to go easy on him on offense and then slack off a little on defense. It may only work for a couple possessions, but sometimes that's enough to decide a game.

Here are Bill Russell's four laws of the psychout, as presented in his article.

Russell 's First Law: You must make the other player do what you want him to do. How? You must start him thinking. If he is thinking instead of doing, he is yours. There is no time in basketball to think: "This has happened; this is what I must do next." In the amount of time it takes to think through that semicolon, it is already too late.

Russell 's Second Law: You got to have the killer instinct. If you do not have it, forget about basketball and go into social psychology or something. If you sometimes wonder if you've got it, you ain't got it. No pussycats, please. The killer instinct, by my definition, is the ability to spot—and exploit—a weakness in your opponent. There are psychological subrules in this category.

To wit: always try a rookie. If you score on him and he thinks that maybe you scored because you are Bill Russell the superstar, he is yours forever after and you can wear him like a bauble on a charm bracelet.

To wit, further: always try a veteran. In my first year in pro basketball I came up against veteran Johnny Kerr , now with Baltimore . I blocked so many shots on him that first night—perhaps you remember—that he was wild with rage. He was so fired up they had to take him out of the game. That is frustration. That is also psychology. (And I might point out that as soon as he calmed down enough that season Kerr deliberately changed his style of shooting when he played against Boston . That is a kind of reverse psychology.)

Russell 's Third Law: Be cute but not cuddly. I mean, you should be nice at all times, but there is a lot to be said for an elbow in the chops when all else fails. This is forceful psychology. Last resort stuff.

Russell 's Final Law: Remember that basketball is a game of habit. In getting good at it, we develop certain habits. Therefore, if you make a player deviate from his habits—by psyching him—you've got him

All right. You now have an honorary Master's Degree in The Psych. Go use it.

Anonymous said...
Now delving into the brain trust of the game, the psychology. Bill Russell was a master of mind games, and to truly flourish as a basketball player, you must exploit your opponent's every weakness. He was truly a master of the court, and of the mind.
7/30/2008 9:44 AM

Anonymous said...
I told you Bawful. I don't want any sellout's razor. No matter how tongue-in-cheek that remark may be. Besides, how do I know I can trust you? If you'll sell off time on your un-sponsored website to Schick, who knows what you may do with personal information. Wakka wakka!
7/30/2008 10:24 AM

BJ said...
Awesome. Thanks for posting, and thanks for the heads-up.

Roger Williams said...
All of Bill's tricks are truer than ever, and the same people fall for the same tricks over and over, no matter HOW many times people tell them they're getting psyched out (see Bryant, Kobe).
7/30/2008 11:10 AM

The Spork said...
i just started doing this whole blog thing myself and i stumbled upon a little gem from the daily oklahoman this guy wants to name the team oklahoma city heroes link is in there let me know what you think, this guy site is pretty bad it makes me laugh http://thesporkk.blogspot.com/

ps- i didn't see an email that was good to send this on, not trying to advertise myself here, because your blog is better. you'll like the link, look at the honorable mention bad team names "heroes"
7/30/2008 11:24 AM

Anonymous said...
Good stuff Matt. Bill Russell was the greatest winner the game has known. But I still have a hard time ranking him above Wilt Chamberlain. Russell has 11 rings, but he also played with 7 Hall of Famers. He made those players better, but they were very good in their own right. So much of a player's legacy is determined by chance...
7/30/2008 3:33 PM

Basketbawful said...
brandon hoffman -- Let me start off by saying I am a HUGE fan of Wilt Chamberlain. In reality, I "like" him better than Russell. There's no denying Wilt's greatness. There still linger, however, questions about his killer instinct and mental toughness.

Yeah, Russ played with several Hall of Famers. But many of those players were in and out of the primes at various times during Boston's dominant years. The Celtics always seemed to make the most of what they had. Wilt, on the other hand, failed with some pretty good teams. In particular that '68 Philly team, as well as the '69 and '70 Lakers teams. His teams were younger and more talented than Boston in '68 and '69, and Wilt couldn't (or wouldn't) take advantage of New York's weakness (the injury to Reed) in that famous Game 7. Yes, Willis was an inspiration...but had Wilt imposed his will and talent on that game, it could have (and should have) gone the Lakers' way.

Bless Wilt, he had as much talent as anyone who's ever played. But he was a relatively gentle giant, for all his fuming and intimidation. He didn't have Russell's desire to destroy his opponents. He didn't have the same mentality that, say, Shaq had in his prime...the desire to smash down any opponent in his way.

I mean, Wilt was known at that time as the strongest man in the world. Great as Russell was, Wilt should have been able to toss him around like a doll. But he wouldn't. He shot an awful lot of fadeaway shots against Russ.

But even then, Wilt was ever so close to winning, say, five championship instead of two. All he needed was a bounce here or there to go his way. Of course, Russell would probably say that winners make their own luck...
7/30/2008 3:48 PM

Anonymous said...
Russell was my original basketball hero. There can be no other.

Comments on the Artest deal? Surely a Pacers fan has an opinion.... :)


Mine: I understand that this is a good bet for Houston, but I'm going to predict a flop. Oh, they might get out of the first round, but this ain't a Celtics remake. Those dudes complement perfectly, and these guys don't.

Also, Artest is weirder than a snake with legs. I think he is constitutionally incapable of playing championship caliber ball at this point in his career.
7/30/2008 4:23 PM

Basketbawful said...
wormboy -- I definitely have an opinion. I'm actually working on a post for Deadspin about it, but I'll give you a few cents worth right now.

If Ron-Ron has proven anything, it's that he can be a great short-term boost for any team. He gave the Pacers one great season, and he propelled the Kings to a playoff berth when he first got there. Most importantly, this is the final year of his contract. In other words...Contract Year Phenomenon, baby! He's going to work his ass of and be on his best behavior (for him). This could be exactly what the Rockets need to get out of the first round...

...and that's about their ceiling, unfortunately. Because I doubt that Yao and/or Tracy can stay healthy. Tracy isn't clutch, nor is Ron. Ron won't be happy being the third option on offense indefinitely.
7/30/2008 4:39 PM