The following picture was sent in by Alexis-RS, who said: "Is Kobe Bryant going broke? Investors say "no," but I say "yes" judging by the craptastic nature of his laptop pictured on the NBA.com homepage. Holy Kendrick Perkins is that screen small! To make things funnier, it doesn't even look like it plugs in, so once the battery goes dead we can assume he's going to spend the rest of the flight to Macao belittling his teammates and reading about squirrel-proof birdfeeders in Skymall." 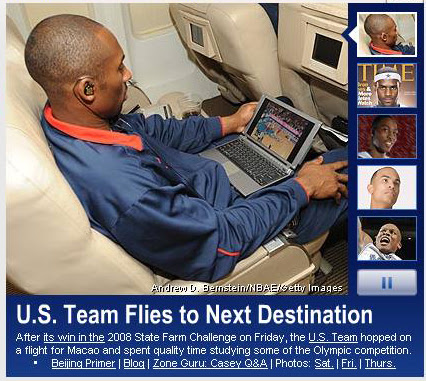 Hm. I'm not sure the laptop is really as small as it appears. I think this is a textbook case of forced perspective, which is the film technique Peter Jackson used in the Lord of the Rings movies to make Gandalf's hat look extra pointy. And although you can't see it, Kobe's laptop is connected to a wire that leads to a small compartment in the hull of the plane where several midgets power it by running on midget-sized hamster wheels. Those same midgets are later crushed into paste and fed to Kobe's dogs. Which sounds cruel and inhumane, I know, until you remember that midgets killed your father.

Nik said...
That looks like a pretty tricked out little Assus laptop which actually is one of the better portable laptops on the market... From a nerd standpoint a pretty good choice :p just had to throw in the nerd 2 cents
7/28/2008 12:21 PM

Basketbawful said...
rhybread -- Yeah. That's why I made the "forced perspective" comment.

nik -- Oh yeah, I figured as much. Kobe's going to have the best of the best. The picture just struck my funny bone.

Anonymous said...
Generally the smaller the laptop the more expensive it is actually. I get your joke though.
7/28/2008 5:29 PM

1. Was this "technique" used before or after Gandalf used his pointy hat trick?

2. Clearly your reader doesn't realize that smaller is better for electronics. I would kill a man for an Eee with extra memory.

eddie said...
If appears to be a standard size laptop. If you look at the keyboard instead of looking at the screen it appears to be as big as your average laptop.
7/30/2008 11:34 AM
Post a Comment
<< Home
Subscribe
RSS Feed
Mailing List