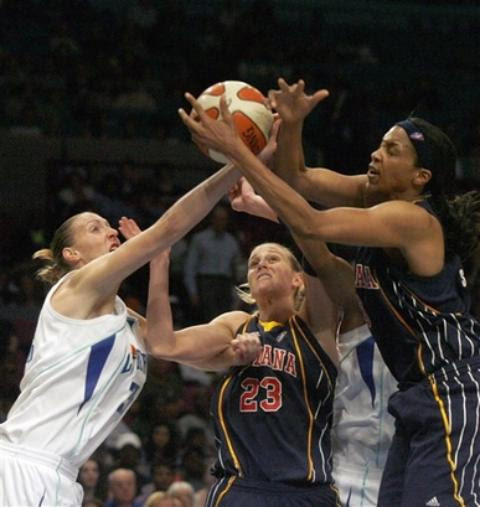 Since Statbuster was covering the draft, I decided to turn my attention to the speed, athleticism and sheer beauty of the WNBA. It did not disappoint.

Katie Douglas: The former Boilermaker scored 18 points for her team. Unfortunately, it took her 20 shots to get there. A 5-for-20 shooting line isn't good. Even by WNBA standards. And her misdirected shooting -- she lead her team in shot attempts, by the way -- was largely responsible for the Fever's triple-overtime loss to the Liberty. But hey, look at the bright side: She had only the second-worst +/- score on the team (-10).

Alison Bales and Sherill Baker: These Indiana reserves showed why they should be lacquered to the bench. Bales' one lonely rebound saved her from a four trillion, and Baker earned a Mario for her 45 seconds of nothingness.

Connecticut Sun: New England's finest (female basketball players) started the game like a fire that had recently been extinguished, scoring only 7 points in the first quarter (which, sadly, was only their second-lowest single-quarter output of the season). They shot only 32 percent for the game as starters Lindsay Whalen, Barbara Turner and Amber Hold combined to shoot 2-for-16. Add to that the nine bricked freethrows and the 16 turnovers (to only 10 assists), and the team had good reason to weep (except big girls don't cry...or so I've heard).

Detroit's fourth quarter: The Shock scored 6 points in the fourth. Wait...6 points?! It's wrong for men to hit women, but I bet Bill Laimbeer sure felt like doing it. (Not that he really needs a reason to feel like hitting someone.)

Damned evil pie: Seimone Augustus ate some pie -- presumably not baked by her -- during a pregame meal...and it threw a barf party in her stomach. Augustus' tummy was aching so badly by halftime that the Minnesota training staff said she was doubtful for the second half. But it was "pie," not "die," so Augustus returned to score 12 of her team-high 23 points in the final two quarters to lead the Lynx over the Monarchs 80-76. But the experience has left a lasting scar that may never fully heal. "I'll never eat another piece of pie before I come to the game. There was no way I was going to stay out of the game. With a game like this and so much on the line as far as playoff position, I wasn't going to miss too many minutes." That's one tuff grrl, eh?

The San Antonio Stars' bench: The Stars lost 77-71 to the Houston Comets last night despite the fact that all five of their starters scored in double-figures. But that was because their bench barely added a figure. The reserves contributed 2 points (1-for-10), 3 rebounds, 1 assist, 1 turnover, and 7 fouls in about 28 minutes of lack-tion. Of course, you probably can't blame the bench for the fact that San Antonio let Houston shoot 56 percent from the field...

Bizarre promotions: The Stars hosted "Hoops Hound Night" last night. I will now let the jokes for naturally of their own accord. 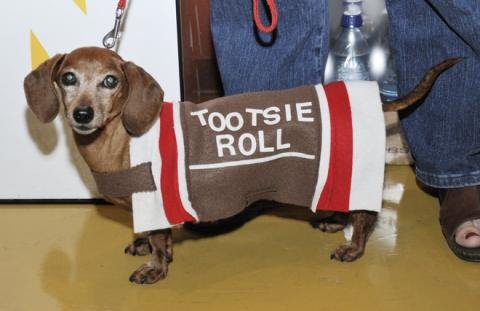 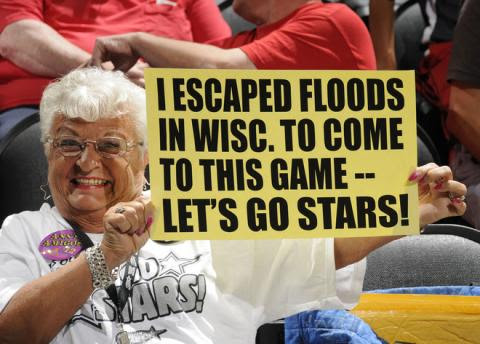 I have only one word for this: Hot. That Becky is one, uh, lucky girl. 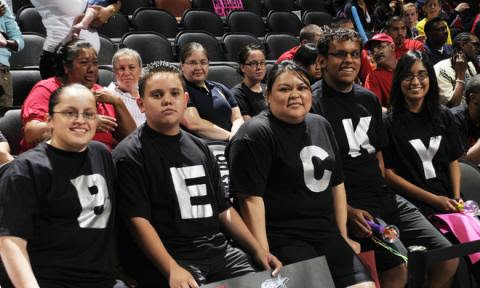 Chicago Sky: The sky truly is the limit for the women of the Windy City. There literally is no upper limit to how much they can suck. Their next-to-last-in-the-league record - second only to Atlanta's 0-13 mark - fell to 3-9 after an 89-79 home loss to the Phoenix Mercury. The loss was made possible in part by 35 percent shooting (28-for-80), eight missed foul shots, and 17 turnovers. But I'll say this for the ladies: They sure did hit the boards. The Sky pulled down a franchise record 25 offensive rebounds.

Diana Taurasi, quote machine: The Phoenix forward finished with 16 points, 9 assists, and a healthy dose of incredulity regarding her team's meek surrender on the offensive glass. "They had 25 [offensive rebounds]? It felt like they had 105. You know what, we're used to getting people world records. But as long as we get the 'W' we don't mind." So by that reasoning if you let somebody eat a kitten or knock over an old lady but you still won, everything would be cool...is that what you're saying, Diana?! 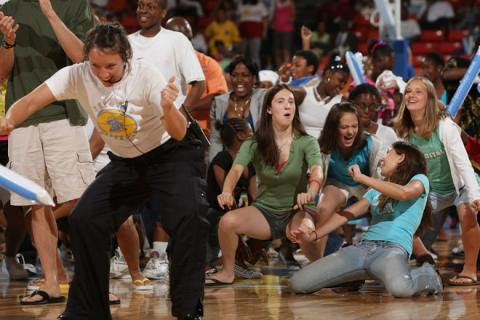 Washington Mystics: The witches shot 37 percent from the field (and only 31 percent from two-point range). They missed 14 freethrows (13-for-27). They scored only 10 points in the second quarter. And they committed 17 turnovers. But here's the kicker: They won.

Los Angeles Sparks: These ladies had the dubious distinction of losing to the Mystics in overtime, thanks primarily to their three-point clankfest (3-for-12) and 21 turnovers (compared to 16 assists). Oh, and they scored zero points in the overtime session.

Michael Cooper: Can a coach dis his team and throw his starting PG under the bus in two sentences or less? Mr. Cooper thinks so. Said Coop: "It was a horrible game by us. We've got to get us a point guard, somebody who can handle pressure and do all the things that we need her to do." Way to give your girls confidence, coach.

Labels: WNBA, Worst of the Night

Anonymous said...
I've never watched a WNBA game, nor do I have any plans to do so after reading this, so I will ask you Basketbawful:

Anonymous said...
This loss to Houston, combined with their second-round exit in last year's playoffs, has convinced me that the Silver Stars are trying to model themselves after the mid-'90s Spurs.

Basketbawful said...
baddave -- Would you expect a WNBA player to say that? Then would you say that to her?

indyjones1024 -- So does that mean we can expect teh Stars to tank as soon as the female Tim Duncan becomes available?

As for keeping it up...I'm seriously considering it. Today was just an experiment.

This post could have been over in one word:

m. Alana said...
Well, I'm glad you're watching it, at least. Please do continue, but my only request is to use as few "WNBA players/fans are lesbians/mannish/actually men" jokes as you can manage. Not only because they personally annoy me, but because you're smarter, funnier and - more relevantly - more creative than that. At least, I think you are.

Regarding the Shock and Bill Laimbeer, did you ever see that clip that All-Access did with them? Apparently they have a "Fuck You, Bill" jar, and everytime they use profanity in that sense, they put a dollar in the jar. If Bill goes by the same rules, I'm sure there's usually several hundred dollars in the jar by the end of the day.
6/27/2008 7:16 PM

Anonymous said...
Check out the girl in the green in that "Cha-Cha Slide" photo-

Basketbawful said...
sports tsar -- You know, I'm actually giving the WNBA a chance. I'm going to follow it for a couple weeks at least. I've never watched more than the random game here or there. But so far, uh, not impressed.

m. alana -- I actually had to reread the post to confirm this, but I didn't use any "WNBA players/fans are lesbians/mannish/actually men" jokes. I mentioned lesbians in the comments section, but that's it. And I can't say I feel very bad about that, since my gay-men-to-lesbian joke ratio is about 1000-to-1 so far. I think my record's pretty clean.

I didn't see that clip, but I read about it last year (at least, I think it was last year) either on Detroit Bad Boys or Need4Sheed. They should have another jar that they put money in every time they feel like punching/killing/running through a wood chippering Bill. They'd probbaly have just as much $$ as Bill would if he tracked his cursing.
6/28/2008 10:08 AM

Anonymous said...
I would expect her to say, "Thank you for giving me some publicity."

And I would say, "You're welcome."

Word of the Day
Previous Posts
Pejas and kitties and space bears...oh my!
Dwyane Wade's "Sueper Sex" pills
The Shawn Kemp of elevator operators
The ultra-rare double flopparoonie
Joe Arpaio to Shaq: "Tell me how my butt tastes."
Word of the Day: Shaqenfreude
The 2008 NBA Playoff Recap
Shaq may forgive, but he never forgets
Word of the Day: Calvin Murphy
That's one big baby...