Proponents of Chronological Snobbery regularly (and loudly) make the case that today's NBA player is superior in every way to the NBA player of yesterday: Like the Six Million Dollar Man -- better, stronger, faster. And it is to those people I submit this picture of Glen "Big Baby Man Boob" Davis from the Celtic championship parade. 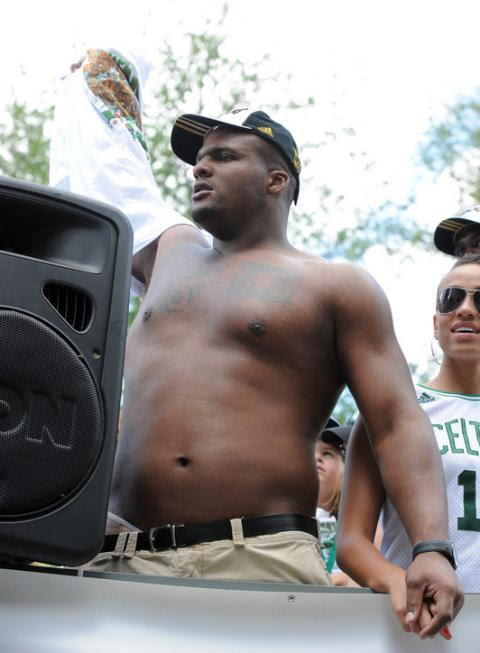 Now, here's what I want to know. Supposedly, Kevin Garnett's matchless intensity puts the whammy on his Celtic teammates, forcing them to emulate him in every way. If that is indeed the case, why wasn't it enough to make Davis put down the Twinkies? And why did Glen feel the need to take his shirt off? Going topless is kind of like wearing spandex: It's a privilege, not a right.

The list of Things Big Baby Should Not Do isn't limited to flashing his jiggly-wigglies to the people of Boston. It also includes giving the Larry O'Brien Trophy a champagne-and-tongue bath. 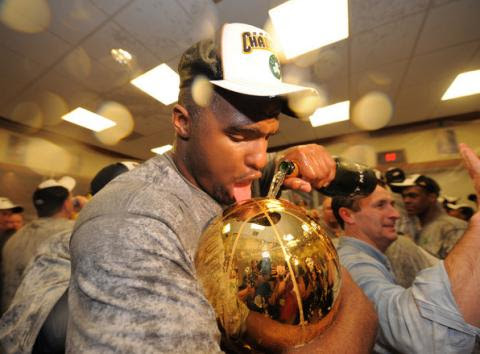 Yeah. "Gak" is exactly what I was thinking too. But hey, I guess I can kinda-sorta forgive him. I mean, you can'ta fake passion like this. However, it's usually better if you avoid having it caught on camera. And trust me, I speak from experience. 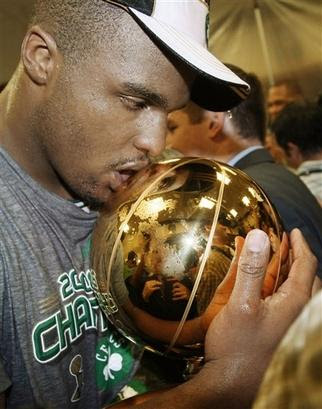 Bionic bonus footage!! That random mention of the Six Million Dollar Man -- not to mention seeing Big Baby's beastly physique -- reminded me of the awesomest episode of any TV series ever: The one where Steve Austin fought Bigfoot. But before all you hippies start getting your panties in a bunch, don't worry. No actual Bigfoots were harmed in the making of this video. It was actually a robot Bigfoot created by space aliens to protect their secret mountain lair. And no, I'm not making that up. Bonus points if you can identify who played the Bigfoot.

Anonymous said...
youre so wrong basketbawful! those 6 pictures are nba guys. not NHL. It was a poor 15 year old girls final thesis in those crazy utah high schools. "What would it be like if Kyle Korver was the top pick for the first 5 teams in the NHL draft. O those lucky mormons
6/23/2008 10:10 AM

Anonymous said...
"Bonus points if you can identify who played the Bigfoot."

and where are my word of the day selections?

Anonymous said...
There's a great episode of 'The Venture Bros.' where a six million dollar man rip-off named 'Steve Summers' (a combination of Steve Austin and Jamie Summers - the bionic woman) is married to a bigfoot. Also, the bigfoot is a dude.
6/23/2008 2:45 PM