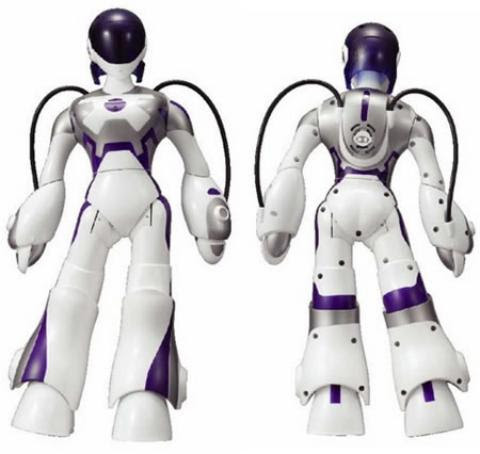 It's no secret that pro ballers have trouble keeping their Buster McThundersticks on safety and holstered. Just ask Calvin Murphy (14 children by nine different women), Shawn Kemp (one child fathered for every Twinkie eaten since 1999), and Karl Malone (impregnated a 13-year-old girl while he was a sophomore at Louisiana Tech). Heck, Magic Johnson contracted HIV while his wife Cookie was pregnant with their child (funny how that part got lost in the "Oh my God, Magic has AIDS!" national freakout).

Well, Japanese scientists may have solved the eternal can't-keep-it-in-his-pants problem. Sega -- the throbbing brains who tried to destroy the video game industry with abominations like the Sega Game Gear, Sega CD, Sega Saturn and Sega 32X -- have created a robot "girlfriend" that will make out with its owner on request. And no: I am not making this up. Seriously.

E.M.A. runs on battery power and uses infrared sensors to sense nearby human heads. But instead of blasting them off with photon torpedos like any other self-respecting robot, she goes into what her designers call "love mode." Basically, this means she puckers up and leans up for a kiss. She even makes a realistic slurping sound when she does it! Awesome.

This is how Minako Sakanoue, a spokeswoman for Sega, described her company's new bionic prostitute: "Strong, tough and battle-ready are some of the words often associated with robots, but we wanted to break that stereotype and provide a robot that's sweet and interactive. She's very lovable and though she's not a human, she can act like a real girlfriend." In addition to tongue-wrestling, the E.M.A.'s other "real girlfriend" features include handing out business cards, singing, dancing and "walking like a lady." (So that's what the kids are calling it these days, eh?) No word yet on whether Sega plans to include a "Nag Mode" or provide blowjob attachments. We can only hope.

One potential problem: The E.M.A. is only 15 inches tall. Which is fine if you're into Microphilia, but it might make things a little uncomfortable when you bring your cyber-slut to Thanksgiving dinner. I mean, having to ask your parents to provide a high chair for your electronic girlfriend...that's just humiliating. (The up side: She doesn't eat and won't encourage your mom to tell embarrassing stories about your youth.)


The E.M.A. will go on sale in September for around $175, which I'm sure you'll agree is an absolute bargain for a concubine who always does what she's told, never talks back and fits in most shoe boxes.

Anonymous said...
AHHAHAH where do you find these things?
very disturbing if you actually searched for this
6/19/2008 10:24 AM

Anonymous said...
If you've never read an interview with Shawn Kemp on the topic, he refuses to directly address the actual number of kids that he has, but concedes that he wishes he could spend more time with them.

Come on, Sega, you can do better- I think I'd rather get out my old genesis and play "Altered Beast" than buy one of these.