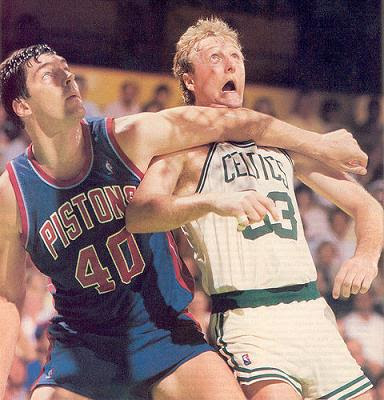 thug (thuhg) 1. verb, -ged, -ging. The act of committing an unnecessarily hard foul or fouls; this includes both those that are called and those that are either missed or ignored by the referees. 2. noun. One who commits an act of thuggery.

Usage example: Long before Bruce "Lee" Bowen was roaming the hardwood, Bill Laimbeer was the undisputed master of thugging.

Word trivia: We really do love the 80s, don't we? The 2008 Playoffs have been filled with so much acrimony and so many hard fouls that somewhere out there Kurt Rambis' neck is tingling...while Kevin McHale is smiling wistfully. And David Stern -- The Iron Boot responsible for stomping out physical play in The League -- must be okay with it, because the commish has been uncharacteristically forgiving through it all, from the near death of Jannero Pargo...


...to Brendan Haywood sending LeBron into the crowd...


Note that three of these examples involve somebody thumping Lebron James, which is less Rambis versus McHale and more Bad Boy Pistons versus Michael Jordan. This goes way beyond hombre-ism and straight into the realm of cheap-shotery. And you know what? I love it. I never realized much I enjoyed this kind of tooth-rattling, bone-jarring it's-okay-to-hate-your-opponents intensity until -- all of a sudden, out of nowhere -- it was back. Tell the truth: Doesn't this make the playoffs way more interesting? The word you're searching for is: Yes.

Thugtastic extra: No thug post would be complete without a Bill Laimbeer mix, now would it?

Anonymous said...
and here is where I absolutely agree. it's entertaining, it's genuine. also, it shows that stern's bulls**t let's-turn-them-into-robots tactics either have to be put aside a little, or ruin the experience. altough the league did sneak a little of that "war on character" flavour with fining pierce for the "menacing gesture". whatever the hell the "manacing gesture" is? well, the commish doesn't seem to be sure himself (as proven by the interview during the celts-hawks game)... but it has to stop!
5/02/2008 11:20 AM

Anonymous said...
If LeBron had not turned into a Cry Baby Flopper, maybe this would be true but unfortunately it is not. The foul by Haywood was so weak, but oh he's trying to hurt LeBron. Please. LeBrat has had the Ref's favor since he came in the league. He gets away with hacking and all sorts of crap on D, and Defenders shy away from playing up on him cause they know he'll get the call.

fiona said...
Songaila's got a one-game suspension now. Ridiculous. And JKidd was let off with a slap on the wrist? I don't care what the rules are but it makes me hopping mad to see the league enforce them so inconsistently.
5/02/2008 12:09 PM

yeah, the media didn't cover an incidental shot by ilgauskas as much as they covered an intentional shot by songalia. WTF?!

btw if your going to defend the wizards antics in this series, try to make some sense while you do it. yeah that foul by haywood that sent lebron flying horizontally through the air sure was "weak". i'll bet lebron flopped in mid-air right!? yeah!
5/02/2008 12:11 PM

What I'm waiting for is some real thugtaliation to start. Remember when the Bulls had Cliff Livingston as their paid mook. He would always come in about a minute after MJ got fouled, and go put some wood on the perp. I want to see someone do that to Bowen....
5/02/2008 12:36 PM

Anonymous said...
"I stand my ground. I thought he got tangled up with LeBron, and LeBron tried to get untangled. And in his method of trying to get untangled, Darius' arm just flew at his chin," Jordan said Thursday. "And LeBron's a terrific actor. We've seen some of his commercials."

Nick Valluri said...
I'm sure it's just a poor selection for that highlight tape but I always thought Laimbeer being a lot more badass than that. Then again, I didn't see him play that much; my view is mostly a product of the Bad Boys legend and ESPN Classic. So I extend the question to those who watched him play: is this tape a pretty accurate summary of how he played? I understand no one can be summarized in one 3 minute clip but ignoring that.
5/02/2008 12:53 PM

Anonymous said...
Bill Laimbeer simply does not give an eff.

Anonymous said...
Basketbawful laments on how the Spurs play defense and yet he praises "cheap shotery"? C'mon, make a stand either you like it or you dont. You cant say you like it and then when another team like the Spurs do it you suddenly hate it. Sheesh make up your mind.
5/03/2008 3:36 AM

Basketbawful said...
anonymous -- If you reread that section carefully, it's not the cheap-shotery I'm praising...what I enjoy is the incredible intensity with which teams are playing. Yes, it's leading to some really hard fouls, some of which are irresponsible and unfortunate. But it's coming from a desire to win that's so intense that the intensity is spilling over.

I think that David Stern has gone too far to wipe out physical play in the league, sanitizing it for the masses, which led to bizarre things like Kobe getting suspended for wacking guys during shot attempts and the whole Suns supspensions from last year's playoffs.

The occasional hard foul, to me, is different than the constant eye-goggling flop-a-palooza orchestrated by the Spurs. So while it might be the same thing to you, it's not to me.
5/03/2008 6:49 AM

Anonymous said...
What's happened is that the league is finally starting to shed the terrible image it's had over the last decade as a league full of lazy, egotistic thugs.
This has been the season where the media and fans alike have started to see players again as selfless and passionate.
So whereas a cheapshot forearm to Lebron's skull would have disgusted a lot of fans a few years ago, or at least reinforced their pre-existing negative opinions about the league, now it's merely a reflection of how much these players want to win.
And now it's not just a couple of brainless thugs who can't control themselves, it's McHale-Rambis all over again. And we love that.
Of course Stern knows that they're still walking a thin line and that's why he made sure the DC-Cavs series didn't get too out of hand.
He also knows what the fans want, so that's why all these pushes, hacks and facebusters (ever notice the resemblance between Konan and Jason Kidd?) are going unpunished.

One more thing, how about using a photoshop effect on the playoffs banner to make the players from eliminated teams get the Obi-wan ghost look? Here's a tutorial I found on it:
http://www.mickm.com/index.php?section=tutorials&id=172
5/03/2008 7:33 AM

Anonymous said...
hey mr. Basketbawful...I know you love ripping the spurs for dirty play and everything,...but then you give credit to the early piston days when rodman was breakin pips nose....im a chi-town guy but come on... if you love lambier's dirtiness...how dont you like the spur's dirtiness.....and I know they complain about every call but it really doesnt matter.... they are just that good..and they get the calls...I hate the celtics and just wanted to get that off my chest cause I hate ALL Boston Teams and I think Boston needs to go back to sucking balls and I hope they choke just like the Patriots did in the super Bowl. Sorry to bring another sport into this but you cant love one teams dirtiness and hate another teams dirtiness without reprocussions ? I dont think I spelled that right. sorry but you cant have it both ways
5/04/2008 1:15 AM

Anonymous said...
I'm sure folks will disagree, but I see a difference between hard fouls and dirty fouls. Bowen is the perfect example--his fouls are almost never hard, but they are often dirty. The dirtiest of all is his intentionally planting his foot so the shooter will land on it. It's obvious in hindsight, but impossible for the officials to penalize with more than a vanilla foul. You do the math: is it worth a foul to make the shooter he's guarding freaking paranoid about injuring himself every time he shoots? Hell yes.
5/05/2008 5:57 PM
Post a Comment
<< Home
Subscribe
RSS Feed
Mailing List