Good stuff from Basketbawful reader anne: "This is a great photo of the aftermath of Jason Kidd's foul from the dallasnews.com site. They have a suck ass flash viewer or I'd link to it directly. It looks like they are running down the court to watch a breakdance duel between Jannero and Kidd. Either that or Jannero looks like he is attempting Booker T's old spinerooni move in the middle of the game."

Bonus points to Peja, who looks like he's thinking, "Your breakdancing moves could kill a large forest animal, my young American friend! Which is why I have soiled my underwear." 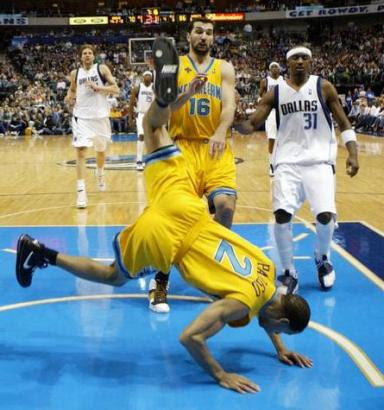 By the way: Thanks to everybody for their suggestions and submissions. I've tried to add everything applicable to Worst of the Weekend. Please forgive me if I missed something...I can't brain on Mondays.

Anonymous said...
isn't anyone else cheesed at the fact that kidd's not being suspended for this pull-down? i can appreciate physical play but frustration fouls like kidd's & haywood's don't have a place in the game

the lesson that kids could be getting from this is that it's ok to be a poor sport and lash out when your sucktastic skills are exposed
4/28/2008 3:54 PM

Basketbawful said...
anonymous -- I'm pretty cheesed, yeah. Especially since Kidd went after a minimum wage player working his ass off to stay in the league. Why Pargo?

(Of course, why did McHale clothesline Kurt Rambis in '84?)

10starpicks -- I don't think Kidd necessarily tried to grab him by the neck, but he clearly added a little mustard to the takedown after the foul had occurred.
4/28/2008 4:36 PM

Anonymous said...
bb - the 80s were a different story altogether; rivalries weren't created by the media and so you had hardnosed players mixing it up with allstars all for the purpose of winning and not to sell shoes/clothing/music. i've always seen the detroit bad boys as the ones that finally made the nba say 'enough' and try to clean up the excessive contact (for better or for worse)

in kidd's defense it looks like he was set on not letting pargo get the shot off, but pulling down on his neck at the last moment is definitely something he should be held accountable for. i applaud chris paul as well for being diplomatic about the whole situation. maybe he's simply posturing so that he's able to drop another 30 & 15 night on kidd again??
4/28/2008 4:57 PM

"Awww," Haywood said, in a whiny, high-pitched voice to mock James. "They are trying to hurt me."
----------------------------
you have GOT to be kidding me... now that's class. they call out cleveland before the series starts, talk smack while getting their collective asses kicked and seem to plan on continuing the verbal diarrhea well into summer vacation. good stuff mr cheapshot - enjoy summer camp with kidd
4/28/2008 5:28 PM

man if jkidd pulled that in hockey or baseball he wouldn't be conscious right now.
that's equilvalent of beaning someone in the head with the baseball. or throwing someone to the ground in hockey from behind

this could probably get into the man love series. i would have said that they will have a sweaty and passionate night later on, but i guess they are already having it now.

Anonymous said...
I think the breakdancing thing should be a new series. Dancemove-which-isn't-actually-a-dancemove-of-the-day, or something.
4/29/2008 7:10 AM

Anonymous said...
lol @ celtics. lol @ pierce.
and let me brag a little and say i saw it coming

btw, give props to horford. he was NOT stupid. jawing to pierce is a damn good idea. dude thinks he's a superstar and he's gonna try and prove it. and fail.

anne said...
Also, I wish I would have remembered to include this in my last post, but you've got to love the Hornets. First of all, CP3 saying that there was no need to eject Kidd from the game (saying basically, Kidd is a non-factor in the playoffs), and then Jannero with this great quote:

"He has that old-man strength that kind of threw me down," Pargo said.

Wild Yams said...
Mr. Bawful, I found a couple pics posted online by someone who took them at last night's Nuggets-Lakers game that I thought may have a place here somewhere: