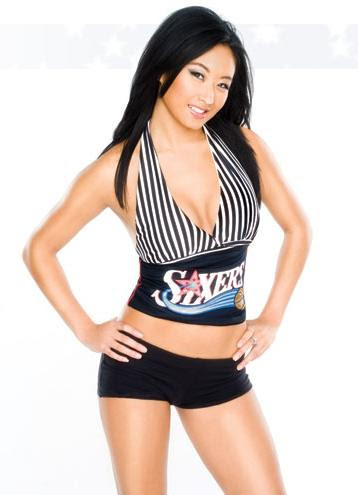 Despite what women think of us, men are interested in more than just large breasts. Many men like long legs, others fancy tight butts, and some even enjoy the sight of bare feet smushed into a banana cream pie. See? Our tastes are as diverse as the number of rude noises we can make by expelling gasses from our bodily cavities.

Personally, I like the brain. To me, there's nothing sexier than an elongated reticular formation and a firm, supple parietal lobe. And don't even bring up the corpus callosum unless you're just trying to make me blush. (And it totally worked. I am now blushing. Jerk.)

Speaking of which, her bio also says she graduated with a BA in science. Huh. I now know only two things about this mysterious "Kuttown" University: 1. The name doesn't turn up on any Internet search engines, and 2. it gives out Bachelor of Arts degrees in science. The science of what, exactly? Irresistibly Sexiness?

But let's not nitpick over a couple little typos. Let's concentrate on the many other fascinating things about Vi, like the fact that she's a math teacher! (And it's not like you need to be able to spell correctly to explain Goldbach's conjecture or transfinite numbers.) Or that her nickname is "Sweet Venus." (I really, really wish I knew the story behind that one.) Why, she even loves warm soda! How many people can put that down next to a picture of them wearing miniature, skin-tight shorts? The answer: I have no idea. (P.S. I don't like warm soda. But if it works for Vi, then I'm more than willing to try it.)

Fun fact: Kutztown University, if that is indeed where Vi attended college, has a mascot named Avalanche the Golden Bear. He is a fat, yellow bear who doesn't wear any pants. No, really. 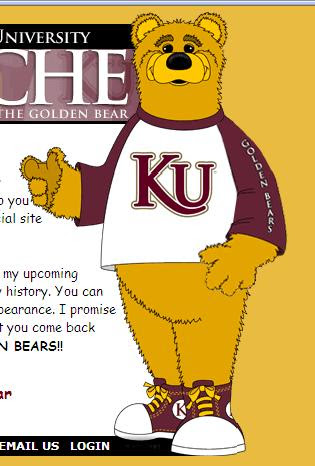 According to his official biography, Avalanche's favorite food is Whoopie Pie. Yes, you read that correctly. Whoopie Pie. God, I miss college. Good news! You can go and reserve Avalanche for your party or corporate event right now!

Credit where it's due: Many thanks to Suns mega-fan LooseChange for the referral. Who better to find a hot, brainy chick than a hot, brainy chick, right? The rest of you readers and/or perverts out there should also feel free to nominate someone for Basketbabe of the Week. But please: No porn. I can find that on my own, as well as many e-mail offers to enlarge my penis to enormous size. Nominees should be an NBA team dancer, a player's wife/girlfriend/mistress (thanks Geert), or an actual reader of the site. I might even stretch the rules for a hot girlfriend/cousin/mother of a faithful reader. (Remember: I heart MILFs.)

Labels: Basketbabe of the Week

Anonymous said...
that's funny I was poking around that dance bracket contest and thought what the hell is a BA in science, but then I read Math teacher and thought if I had her as a math teacher I probably fail every test on purpose LOL
4/07/2008 2:35 PM

Faizan said...
Finally, a contribution I can make. Please tell me you can somehow incorporate this video into Basketbawful. It, really and truly and in every sense of the word, is basketbAWFUL.

Anonymous said...
Wow, how in the hell does a math teacher come to the cheerleading profession? And, since I am a math teacher too, how can I meet her (insert gross and unpolite joke here, along the way "sinus/cosinus")?
4/08/2008 4:38 AM

Anonymous said...
oh yesss ... god in form of some blogging guy has heard my prayers and posted a new basketbabe ...
now i´m gonna read it .. slowly oh so slowly

slyguy183 said...
Hot but dumb, thanks for posting an Asian babe!

Oh, you can get a B.A. in science I believe. At Stony Brook, most of the courses you take together are the same, there's no specialization tract if you're a B.A. vs. B.S. But whatever, if she's lying she's lying, good job getting the scoop
4/08/2008 9:23 AM

Anonymous said...
Wesley - Don't see I, II, or III. They're worse than the original trilogy.

Picked first overall yesterday, crazy player, she dunks all over the place and a hot hot lady...one of People's 100 Most Beautiful as well

Of course, I'm also biased cuz of the Toronto connection (sister to AP of the Raps)

Anonymous said...
The typo was made by the people who published it, not Vi. With that said, I do not expect you to have the cognitive ability necessary to consider such an alternative. Tell me, did it take you longer to look up random components of the brain you know nothing about, (my degree is in neurobiology so no need to challenge me there), or to search the Internet so meticulously as you described for the name of a university, with your only ambition being the attempt to discredit someone whose life you clearly envy? Well, here are some more things to envy: Vi is not only a math teacher, she's a professional choreographer, has established charity organizations, is going back to business school, and oh yeah, just bought a beach house with her husband, a surgeon. In conclusion, don't demean people based on a beautiful picture and a random typo associated with one's name, because people are sure as hell going to judge YOU for that. My conclusion? you're laughably pathetic.
6/25/2010 5:05 PM

For someone who supposedly has a degree in neurobiology, you're pretty stupid. And I say that with my deepest respect and sympathies.

Fyi, after I published this post, I was contacted by Eric Blankenship, the Sixers Vice President of Marketing. He -- unlike you, Dr. Idiot -- understood that I was using "sarcasm" and "humor," which are subjects that apparently don't get covered in neurobiology school (I'll assume you instead chose electives such as Arrogance 101 and Advanced Superdickery 510).

At any rate, Mr. Blankenship explained to me that an intern made the typo and passed what to most non-stupids was my obvious appreciation onto Vi. Vi was cool with the post...so I'm not sure what you're problem is.