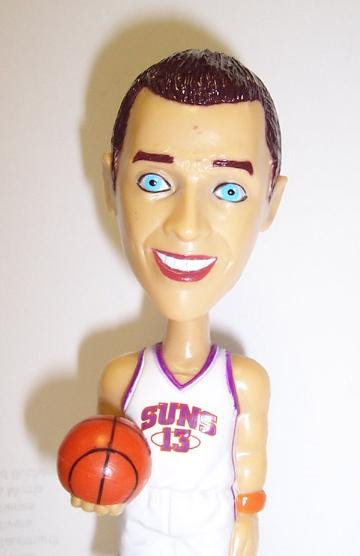 Life is funny. Sometimes you find something awesome, and sometimes something awesome finds you. In this case, a little of both happened when our good friend Evil Ted stumbled across this Steve Nash bobblepop doll at a Blockbuster video in Oak Park, Illinois. A bargain at only $5 plus tax? Absolutely.

Now, I'm only guessing this doll is supposed to be Steve Nash because it's wearing a Phoenix Suns jersey with a number 13 on it...just like Captain Canada himself. But this might be a pretty big assumption considering the fact that "Nash" looks like the mutant love child of Pee-wee Herman and Annie Lennox. Which, come to think of it, pretty much means it just looks like Annie Lennox. You think I'm kidding? No way. And I can assure you that sweet dreams are not made of these. 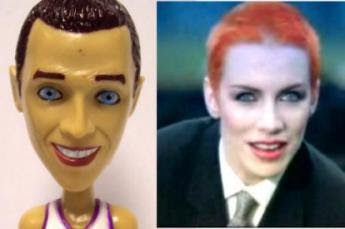 Also take note of the raised, Cro-Magnon Neanderthal brow. It's like the first mold was supposed to be one of those Geico cavemen and somebody said, "No, wait, that looks more like NBA superstar Steve Nash! Let's go with it!" And I haven't even told you the best part yet. Remember how I called it a "bobblepop" doll? This means that the doll does more than just shake its disturbing little head while those stunning blue eyes stare directly into your very soul. It also "transforms" into a lollipop. But not just any old lollipop. It becomes the freakiest NBA-licensed lollipop ever. And I have the photographic evidence necessary to back up that claim. 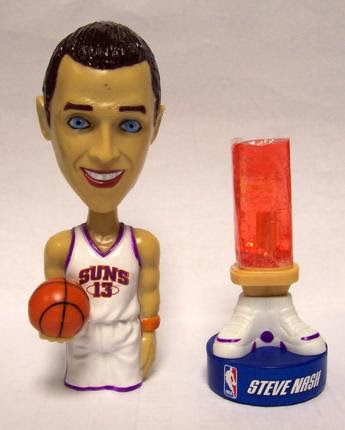 That's right, folks. For only the aforementioned $5 plus tax, you too can lick on delicious candy that's jutting straight out of Steve Nash's nether regions. Seriously, though, couldn't they have at least left his shorts on or something? I'm a big fan and all that, but even I don't want to look down at Nash's bare legs while enjoying a sugary confection. It truly gives new meaning to the term "sucker."

And lest you think this is just my sorry attempt at an April Fool's gag and/or another penis joke, here's the proof that this is indeed an officially-sanctioned piece of NBA merchandise. 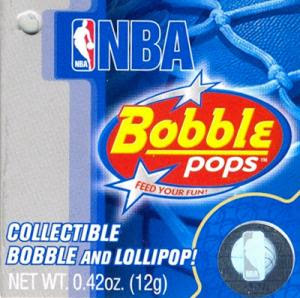 Anonymous said...
the annie lennox resemblance is uncanny. this was obviously labeled incorrectly at the factory...

Anonymous said...
i saw those at my local Giant grocery store. i looked for any pistons, but was not surprised to find none. without ben's afro we have no hope of low level grocery store type merchandise.

chauncey was on the cover of an nba coloring book. but all the players inside wore generic jerseys saying "All-Star" on them.
4/01/2008 12:05 PM

Anonymous said...
"Due to the smash hit of the RuPaul doll, we, the Logo channel announce the Boy George Lollipop Doll in time for the Pride Parade season!"
4/01/2008 1:57 PM

Anonymous said...
Stephanie is correct. The word you're searching for is neanderthal, literally "Neander Valley." The beautiful thing is that there's a Neander River in Germany where they found the original Neanderthal skeleton, and yes, the people who live in the valley could be called neanderthals. Rough on real estate prices, I'd guess.
4/01/2008 4:44 PM

Wild Yams said...
I think that what is actually going on here is that it is an Annie Lennox bobblepop doll. Anyone who knows anything about basketball knows that Annie Lennox is like the Jack Nicholson or Spike Lee of the Phoenix Suns, eternally lurking courtside at the Purple Palace, decked out in her traditional Steve Nash jersey and waving a sign that says "Planet Orange" on it.

I don't know about you all, but in the line of celebrity NBA fan candies I'm personally holding out for the Frankie Muniz Clipper-attired bobblepop doll.
4/01/2008 6:36 PM

Anonymous said...
I want to see some more of these. Does anyone happen to have a link to the rest of the players "Bobble Pops"

Alex(andra) Cavnar said...
wow that's definitly the creepiest thing I have ever seen in my life

Unknown said...
Ever used to pull Rolly Pollies in half as a kid? You'd get one shell, and then the back section with a buncha guts hanging off it. This reminds me alot like it.