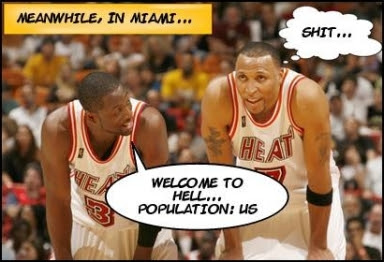 Basketbawful and Hardwood Paroxysm are truly ashamed to present our weekly Powerless Rankings. This week I wade -- Wade, get it? -- through the muck and mire of the Leastern Conference, while the Hardwoods sit in the dirty bathwater that is the West.

Miami: This team exchanged a not-playing Shaq for a totally-playing (and very motivated) Shawn Marion (and Marcus Banks, but he doesn't really count). They're going to get better, mostly because they couldn't possibly get any worse (I think). But until they actually win a couple games, the Heat -- the NBA's only non-10-win team -- is staying right here at the top of our rankings.

Hardwood Paroxysm says: Hell Hath No Fury Like Matrix Disrespected. If this team didn't have Ricky f*cking Davis jacking up trash 15 times a game, they could make a run. But they do, so they won't.

New York: This is "improvement"? The Knicks erupted in wild celebration after breaking their eight-game losing streak with a one-point victory over the 19-win Milwaukee Bucks. I guess you commemorate the little things in life when the little things are all you have.

Hardwood Paroxysm says: Jamal Crawford said beating the Bucks was almost like "winning a championship." That's pretty much all we need to say. Oh, and they're talking about trading for Ben Wallace.

Charlotte: A Charlotte-based columnist described the Bobcats as "team going through the motions" and 'Cats guard Raymond Felton apologized for his own lack of passion and fight. Think about it this way, though: Assume that everything you did at work for the next three months was entirely meaningless, but you still wouldn't be fired. How motivated would you be? Exactly. Still, they have twice as many wins as the Heat (18 to 9), and three more wins than the Knicks despite a huge payroll disparity ($88 million for New York compared to Charlotte's $52 million).

Hardwood Paroxysm says: Without G-Force, they're still losing, only now they're losing in a really boring manner.

Milwaukee: Their 19-33 record is now highlighted by an embarrassing home loss to the Los Angeles...Clippers. The Clippers. At this point, these guys probably couldn't beat the Milwaukee Wheelchair Bucks.

Hardwood Paroxysm says: Possibly the worst coached team in the NBA right now that doesn't play in New York. Charlie Villanueva lights it up and then gets no shots in a second half loss to the Knicks. Free VNuv!

Chicago: When the book on this season is written, the final words will be "Chris Duhon just needed more shots." Or something.

Hardwood Paroxysm says: Well, geez, I don't see what the problem is. If Chris Duhon would score 30+ points a game every time, they'd win every game. I don't see why they don't just do that every game.

Philadelphia: Andre Miller: Eastern Conference Player of the Week. Who knew? Plus the Sixers have a modest four-game winning streak going (including last night's win over the understaffed Mavericks). And their next three games are against Memphis, Minnesota, and New York. If Philly extends their streak to seven games -- still an iffy prospect for this team -- it will be the most successful period in Philadelphia sports since the Eagles made it to the Super Bowl in 2004.

Hardwood Paroxysm says: Nah, we don't want a draft pick. We're playing to win now! Props for not tanking though. And the young talent looks good. For me to poop on.

Indiana: Rejoice, Indianapolis, rejoice! The Pacers have won two games in a row for the first time in almost two months! Rejoice!

Hardwood Paroxysm says: The bad horror movie monster of the NBA. It'll kill a few unsuspecting victims, but eventually the cheerleader hits them with the axe.

New Jersey: On Sunday, Vince Carter scored (29 points), Jason Kidd dished (14 assists), and the Nets downed the Mavericks by 19. This is what the Nets were supposed to do every night. Instead, it's just a mid-season aberration game that'll be forgotten by...what was I talking about again? Man, if there were any Nets fans left alive, they'd be pissed.

Atlanta: The dirty birds are currently seventh in the East, which kind of sucks, if only because I predicted there was no way this team was going to make the playoffs. Meh. The Eastern Conference playoff race is like the late stages of a drunken frat party: Everybody has a chance to score. Of course, the seventh spot would mean a first-round matchup with the Pistons, which would be like waking up next to the fat chick, only to find out the fat chick is actually a dude named Murry. So at this rate, it looks like the Hawks might get to extend their season by four games.

Hardwood Paroxysm says: They're trying to figure out how to play every game at home, and not against LeBron James. If they can pull that off, watch out!

Washington: Even a career game from Roger Mason (32 points, 13-for-20) couldn't save them from a huge choke job in Oakland. Where's that gritty, nasty defense Eddie Jordan was raving about last month?

Hardwood Paroxysm says: Time to dial up the Zero if they want any shot of home court in the first round.

Cleveland: The Cavaliers are undefeated this season when Larry Hughes scores at least 40 points. I think Mike Brown might be onto something.

Hardwood Paroxysm says: They might as well just start 3 players for the Cavs. Give LeBron more room to work.

Toronto: Chris Bosh is scoring (22.4 RPG) and rebounding (9.2). Jose Calderon is playing like an All-Star (no matter what Gilbert Arenas says). Jason Kapono is sniping away (51 percent from three-point range). And Jamario Moon is a rookie sensation. But the Raptors haven't really improved at all. They're currently 27-23. This time last season, they were...27-23. What gives?

Hardwood Paroxysm says: The regular season version of your mom's meatloaf. It's pretty good, but it's nothing special if you're having guests over.

Orlando: They have the league's best road record (19-10) but they struggle at home (13-11, and 1-3 on their current five-game home stand). Are their baby mamas nagging at them? Are they spending too much time at The World's Largest McDonald's PlayPlace? Are they secretly afraid Walt Disney's frozen corpse is going to rise from the grave and start some sort of Zombie Apocalypse? I need answers, and I need them now.

Hardwood Paroxysm says: You can't spell "elite" without Hedo. Okay, you can. That's probably a good sign as to the Magic's chances of becoming elite.

Detroit: Chauncy Billups is more worried about in-game dunk contests between Pistons rookies Rodney Stuckey and Arron Afflalo than anything the their opponents have been doing lately. Now that’s some serious confidence. Of course, the Pistons were pretty confident the last couple years too...

Hardwood Paroxysm says: What's amazing is they don't even seem to notice it when they annihilate teams. They just keep chuggin'. Sheed's gonna be pissed about the All-Star nod, though. He wanted some hot tub time.

Celtics: Word has it that Brian Scalabrine hired a psychic to help him channel the spirit of Bill Walton. Only, Big Bill's still alive. He does seem to be channelling Walton's feet, though. Anyway, the C's are currently 5-2 without KG and 16-0 versus the Western Conference. Rajon Rondo and the other roleplayers are stepping up their games. I hope the Boston fans are practicing their "Beat L.A." chants.

Hardwood Paroxysm says: Paul Pierce would like to invite everyone to take a long hard suck on his banana hammock. Thanks.

Anonymous said...
I got to say your posts are great. The powerless rankings are something i look forward to every week. As a toronto fan i think in brags keep playing the way he is we will pass the amgic by the end of the year.
2/12/2008 12:34 PM

Anonymous said...
if your 2nd to last comment regarding the celtics fans practicing their beat la chants is implying that the lakers are going to meet them in the finals (cuz they've already played their regular season games) then im glad you came to your senses and giving the lakers the respect they deserve.
2/12/2008 3:05 PM

Basketbawful said...
anonymous -- Thanks. I like the mighty dinos. I'm hoping they can pick it up.

james -- I never said the Lakers weren't good, and the Gasol trade has definitely taken them to a new level (or so it seems). Just because their existence makes me feel like I'm covered in a layer of crawling insects doesn't mean I don't know they're a tough team.
2/12/2008 3:08 PM

Anonymous said...
Ricky Davis: did you know that, in a ten year career, Ricky Ricky has played a grand total of 11 playoff games?

Also: Ricky Ricky won a total of 1 (one) playoff series.

So: how to explain the close suck/Ricky Davis correlation? Why do the teams he plays for suck so bad?

Ricky actually has half-decent numbers. He'll give you something like 15/4/4 every night.

Miami needs to dump him to get back to winning. Send him to the Spurs. There's matter/antimatter universe-destroying potencial right there.
2/12/2008 4:13 PM

Anonymous said...
Ben Wallace to New York? Yeah right, there's no way that rumor could be circulating. Not even the Knicks are that stu... HOLY CORNCOB ON A STICK! There it is on rotoworld. Man, the Knicks are in a League all of their own. Although to be fair, it sounds like the Bulls were the ones to approach the Knicks, and the Knicks seem to be the ones thinking twice about it. Maybe Isiah found some common sense in an old x-mas card somewhere.

Anonymous said...
Hey, it DID feel like the Knicks won the championship!

Word of the Day
Previous Posts
Defensive stancing with Michael Jordan
If a trade is demanded in New Jersey, does it make...
The Phone Call (and Worst of the Night)
Worst of the Night, and more thoughts on Shaq to P...
Mark my words: Shaq will be the right move
Worst of the Ni...Shaq to Phoenix?!
While you were busy dreading a Lakers 39-game win ...
Powerless rankings: Western Conference
Word of the Day: man region
Worst of the Weekend: Super Bowl Edition