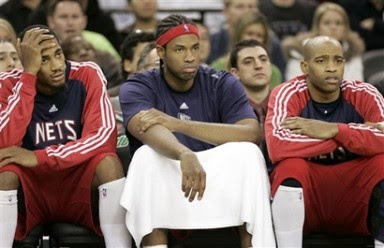 No caption. I just love the look on Vince Carter's face.
Mike D'Antoni: Last week, I said: "I really hope that coach D'Antoni keeps playing [Brian Skinner]...but my guess is that once Grant Hill gets back, Skinner's going back into cold storage." Well, Hill came returned from organ removal last night and played 27 minutes. Skinner played five minutes. Now, I know Skinner's abilities are limited, but I tend to think the Suns need at least one player who likes to bang and do the dirty work. And nobody else is doing it.

Boris Diaw: Yeah, Diaw played well against the Lakers and Nets, but let's not pronounce him "back" just yet. Last night he shot 2-for-6 and had a team-high 4 turnovers. Yet he got 24 minutes and Brian Skinner got five. Why? You'll have to ask the coach.

Mo Williams: The Bucks starting point guard missed last night's game against the Suns due to injury. What kind of injury, you ask? A sprained left pinky finger. Seriously. Don't laugh. I once sprained my left pinky. It was terrible. Never healed right, either. Now I have a little baby arm. True story.

New Jersey Nets: Another night, another brutal beating for the joyless Nets. They've now lost seven of their last eight games. And the lone win in this latest stretch was against the Sonics, so that doesn't really count. The Nets average margin of defeat: 17 points. They were lethargic on offense and absolutely lifeless on defense (the Kings shot 57.5 percent and pounded them on the boards 41-29). All that and Vince Carter, not Jason Kidd, led the Nets in assists (he had 8). As New Jersey coach Lawrence Frank put it: "Just a dismal performance. We are simply playing very poorly."

Jason Collins: Scoreless again. And in the 10 minutes he played, he contributed nothing beyond a pair of hard fouls. But Collins wasn't the only inept New Jersey roleplayer; Josh Boon (0-for-5), Bostjan Nachbar (1-for-5), Marcus Williams (1-for-7), Jamaal Magloire (0-for-2) all sucked pretty hard, too. Another sad note is that little Darrell Armstrong (6'1") outrebounded Collins (7'0") and Magloire (6'11") 2-to-1 in oly four minutes (compared to their combined 16 minutes).

Larry Brown: The former Knicks coach thinks that management had spies "throughout the arena" to keep in eye on him. Sure, Larry. Look, I know conspiracy theories are a lot of fun and all, but it didn't take a spy to see that the team sucked and your players hated you. A 90-year-old woman watching from home could have come to the same conclusion. Let it go.

Peter Vecsey: I've never really liked Peter Vecsey. He's not quite important enough to enter into the Rogue's Gallery of Basketbawful Villains, but he is a douchebag of the highest order. He's arrogant, imperious, looks like he should be managing a professional wrestler (think Jimmy Hart, but not as cool), and his "witty insults" usually sound like a bunch of nonsense (like when he said that Mike Bibby went to Wendy's to figure out why he was shooting poorly; don't ask, just read it).

But my biggest problem with Vecsey is his history of blatant inaccuracy. How many of his trade scoops* have actually happened? He spent five or six years publishing "100 percent true" trade rumors concerning Karl Malone (to the Knicks, to the Mavericks, etc.), and yet Malone was never traded. I know I make mistakes from time to time, but this is a not-for-profit blog. Hell, I may actually be operating at a loss. But Vecsey gets paid to do what he does. Shouldn't he do some fact-checking? Take this article, for instance. In it, Vecsey criticizes Golden State Warriors coach Don Nelson's misuse of Mike Dunleavy Jr. prior to his trade to the Pacers. And while that's totally true, Vecsey goes on to say: "It should be noted, in 28 years of coaching some exceptionally talented teams, Nelson's brilliance has yet to shimmer on a single conference final."

*I call them "trade poops." Mostly because I think poop is funny.

George Bush: According to a new study conducted by two nonprofit journalism organizations, George Bush and top administration officials "issued hundreds of false statements about the national security threat from Iraq in the two years following the 2001 terrorist attacks." Furthermore, the study "counted 935 false statements in the two-year period. It found that in speeches, briefings, interviews and other venues, Bush and administration officials stated unequivocally on at least 532 occasions that Iraq had weapons of mass destruction or was trying to produce or obtain them or had links to al-Qaida or both." Turns out none of that was true? Really?! That's one seriously cutting edge study. Anyway, you know you're a big, lying jerk when a bunch of poorly paid journalists spend a few years tabulating your lies for free. 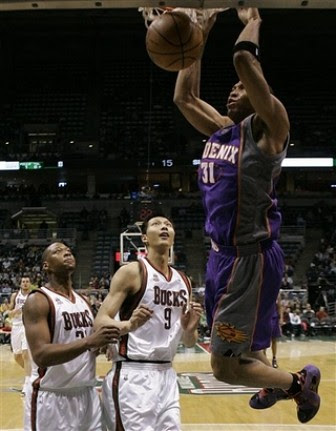 Anonymous said...
how's this for a caption?

Anonymous said...
Sorry to intrude again, I'm becoming an annoying pest. I guess I have to fill the hole left by flohtingpoint. :D

Maybe Vecsey meant: "In the Conference Finals Don Nelson reached, he never outsmarted the other team (in fact, he lost five times)". I won't defend Vecsey, 'cause I can't stand him, but I have to admit that maybe (maybe) Don Nelson is not as smart as people think.

I mean, I thank him for making the Warriors such a funny and nice and crazy team, but he has some major faults:
1) Bad all-around coach;
2) I don't remember the last rookie he trusted (maybe Nowitki... wow, big deal);
3) Not a losing, not a winning coach. Maybe the most entertaining slightly-over-.500 coach ever, with Doug Moe;
4) In his teams came to play two superb euro players (who couldn't defend, I know): Antoine Rigaudeau and Sarunas Jazzycabbages (as he liked to call him). Well, you know what? Jasikevicius is the best euro players of the last decade, and Nellie glued him on the pine for good. This was a stupid move. Really. Believe me.

farfa -- Dude, intrude away. If that's what Vecsey meant, he's a crappy writer. Which would be a sad commentary, since he's been doing it for over 20 years.

I'm not necessarily trying to defend Don Nelson here, but during the 80s, he coached the Bucks to seven 50-win seasons and seven division titles. He led that same team to an upset of the Bird/McHale/Parish Celtics in the '83 Playoffs, and he ousted the defending champion 76ers in the '84 playoffs, then knocked them out again in '86. And while Sidney Moncrief, Marques Johnson, Junior Bridgeman, Bob Lanier, Paul Pressey, Terry Cummings, and Jack Sikma were all very good players, they weren't exactly Bird/McHale/Parish/Johnson/Ainge, or Erving/Malone/Toney/Cheeks/Jones for that matter.

He also squeezed some 50-win seasons out of the Golden State Warriors, and he helped make the Mavs a respectable team again. So he failed to win a championship? Well, the Warriors didn't do much, ever, after he left, and the Mavericks still haven't won a title (and they choked away their one trip to the Finals).

So sure, Nelson didn't win a title with any of the teams he coached. Never made it to the Finals, even. But the 76ers and Celtics teams that put his Bucks out were and still are considered some of the greatest of all time. His Mavs got kept out of the Finals by the Lakers and Spurs, who themselves combined for 7 titles. Is it really his fault that better teams were always standing in his way?

I know Nelson is a gimmick coach who specializes in funky lineups, and his teams sometimes seem to be undisciplined. But he gets a lot of mileage out of his talent. Do you think Jackson could have coached the Bucks past the Celtics in '84? Me neither.
1/23/2008 1:11 PM

Unknown said...
Sorry to intrude again, I'm becoming an annoying pest. I guess I have to fill the hole left by flohtingpoint. :D

I'm still around, just busy at work/home so I haven't gotten much time to watch any NBA action =P


Mo Williams: The Bucks starting point guard missed last night's game against the Suns due to injury. What kind of injury, you ask? A sprained left pinky finger. Seriously. Don't laugh. I once sprained my left pinky. It was terrible.

Yea, at age 14 I broke my pinky (playing freshman bball) on the growth plate and wound up with a full arm cast. Even the kids getting wedgies and trash-canned on a regular basis were calling me a vagina =/
1/23/2008 1:38 PM

Anonymous said...
I actually sprained my index finger once when it was sandwiched between my brother's fist and my knee when I was like 15
and I was still "able/forced" to play piano/violin
what a wuss LOL
1/23/2008 1:58 PM

Anonymous said...
I hate to say this, but I enjoy Vecsey's writing. Most of his jokes are lame, but I kinda enjoy his non-stop negativity.

Many of his columns are petty and vindictive (especially those about Sir Charles or Danny Fortson), but still fun to read. It's sort of the same reason WOTN is my favorite blog feature ever (minus the pettiness and vindictiveness, obviously).