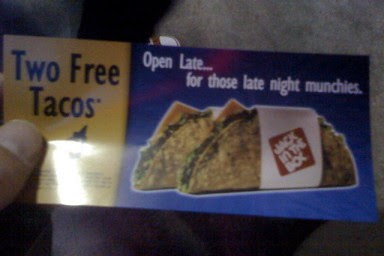 "Free tacos?! Hell yeeeeeeeah!"
free taco excitement (fre tah'-ko ek-sit'-muhnt) noun. The (slightly irrational) enthusiasm that the crowd feels in the late stages of a live basketball game when the home team is close to reaching an activator on the back of the ticket that will provide the fans with free fast food. In many cases, this will rouse the crowd into a chanting, foot-stomping frenzy, even in the late stages of a meaningless regular season blowout.

Usage example: With only a few minutes left, the game was pretty much decided. But the fans were still on their feet cheering. Not to support their team, though. It was just free taco excitement.

Word history: The term was coined by Craig Kwasniewski of The Association. In his words: "Simply put, Laker fans get wild and crazy for two things: Sick buzzer beaters by Kobe Bryant and free tacos. The promotional staff gives out free coupons whenever the Lakers win and hold their opponents under 100. What you get is the entire Staples Center in a playoff-level frenzy chanting 'We want tacos!' and 'Defense...Defense!' during garbage time. The Milwaukee Bucks actually tried to foul the Lakers at the end of one game to avoid getting 'taco'd,' drawing boos from all around. We're talking $1 tacos and hours of indigestion, and the place was rocking like when Kobe beat the Suns in Game 4 back in 2006. It was also very funny seeing Linas Kleiza scrambling to get the Nuggets over 100 for the 'taco block.' DJ Mbenga hacked the [poop] out of the guy, but no foul was called. I guess Dick Bavetta wanted some tacos."

Free taco excitement is a big deal to the hometown fans, but opposing players sometimes take it as an grevious insult and sign of disrespect. If, you know, they're insane and/or retarded. You might remember how last season certain Knicks players (most notably Steve Francis and Jerome James) almost started a brawl in Chicago when the Bulls tried to score a couple extra points that would have rewarded their fans with a free Big Mac. Mind you, one greasy fatburger can't begin to repay fans for the pain and anquish of sitting through an entire game involving the Knicks, so I'm not sure what the problem was.

The bottom line is: Fans loved themselves some free stuff. Who doesn't? And it's not like the local businesses make it hard to "win." Take this coupon on the back of a Phoenix Suns season ticket (thanks to the astonishing LooseChange for the scan).

Two free tacos when the Suns score 99 or more points? Yeesh. They might as well just be giving them away for free. Which I guess is exactly what they're doing, but, well, you know what I mean. Never one to be outdone, McDonalds is also getting in on the act: 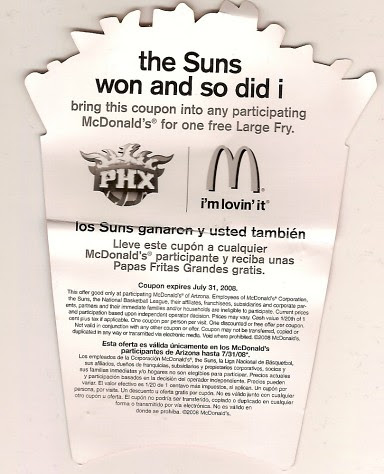 Mmmmm...free large fries every time Phoenix wins at home. The Suns are 110-32 at the US Airways Center over the last four seasons, so that's a lot of oily goodness being slathered around the Valley of the Sun. If you think about it, with all this crappy food being handed out, the Suns actually constitute a serious health risk to the entire city. If Steve Nash doesn't retire soon, Phoenix is going to be entirely populated by sloshing ham beasts. A truly scary thought.

Update: Thanks to Ben Q Rock from Third Quarter Collapse for providing a link to this press release from Dunkin Donuts, which states that when the Magic win, it means free donuts for anybody and everybody in central Florida. And all you have to do is "mention the Magic won the previous evening." That's it. No tickets or coupons are necessary, the Magic don't have to score a certain number of points or hit a half-court three-pointer or anything like that. If they win, whether at home or away, people get a donut. Now that, my friends, is truly FAN-tastic.

Unknown said...
Or you could get the triple whammy of having your section your sitting in get called for the free pizza hut pizza, then after the game grab your free fries and tacos. I think my circulatory system thanks me for leaving Phoenix for St. Louis.
1/24/2008 10:24 AM

lemco13 said...
I was acctually at a Raptors game a couple years back and (I dont know if they still do the same thing) but if the team broke 100 points and won everyone got a free slice of pizza ay PizzaPizza. Anyways, the game was pretty much over, Toronto was up 98 to whatever and they were just dribbling out the clock to be curtious to the other team. All of a sudden Rafer Alston stole the ball from a teammate near the halfcourt line and launched a three that hit right at the buzzer. Everybody went nuts, the other team was pissed, and Rafer was celebrated like he just won them the championship.
1/24/2008 10:58 AM

Anonymous said...
Rafer actually did it against us this year when houston was up 9

Actual comment:
The Magic make it easiest for fans to score free junk food. Any time the Magic win -- home or away, with no over/under scoring requirements -- fans in Central Florida can go to a participating Dunkin' Donuts location for one free donut. They don't have to turn in a ticket-stub or voucher; they just walk up to the counter, order their donut, and mention the Magic won the previous night. Don't believe me? Here's the press release.

Ben Q. Rock said...
All of a sudden Rafer Alston stole the ball from a teammate near the halfcourt line and launched a three that hit right at the buzzer.

LooseChange said...
subway is also a sponsor of the suns, and they started this wacky promotion where they attach subs to little parachutes and float them down into the crowd to the tune of catch me now i'm falling. totally not joking either.

anyway, during a playoff game last year, abc was in house with their nauseating roaming cameras, and the crew was set up close to our seats. i was chatting with them when suddenly it's chaos. a couple of the floating subs got tangled in the wires holding up the cameras, and they had to go physically retrieve them. they should have just shut the cameras down, seeing as how they prerty much suck. :-)
1/24/2008 11:16 AM

Anonymous said...
You should probably know about the Portland "Chalupa" phenomenon... check w/Dave @ BlazersEdge, but as far as I've heard, in preseason they still had Z-bo's face pop up on the jumbotron whenever the score busted 100...
1/24/2008 1:03 PM

Jake said...
Here's another great example of taco excitement...
http://www.realcavsfans.com/showthread.php?t=7187
Anderson Varejao, who can barely hit a 10 foot jump shot, jacked up a three at the end of the game. He was hoping to give the Cleveland fans a free chalupa. Unfortunately, he missed.
1/25/2008 6:57 AM

Anonymous said...
The Pacers can't afford any free food after their stunning moves and attendance. However, after any Pacers game, win or lose, head to your nearest adult entertainment bar and you can catch a free bullet!
1/25/2008 9:50 AM

Anonymous said...
Saw this Word of the Day and remembered this quote from a while back. The only decent thing Cleveland ever got out of Lasagna Flop.

Cleveland's Desagana Diop on why he launched a 3-pointer against the Bulls:
"I was open and we were up by so many points, so I shot it. I wanted the fans to get a chalupa."

Anonymous said...
The first time I saw this page I thought it said "free taco excrement."