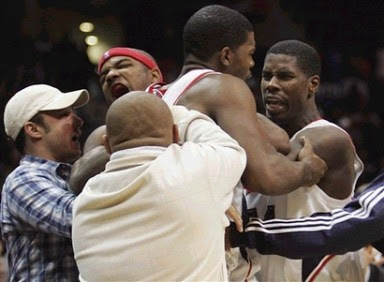 Atlanta Hawks: Yes, they won, but they got outscored 27-8 in the third quarter and needed a last-second shot from Joe Johnson to beat the craptastic Timberwolves (2-15). Josh Childress must have thought it was an "effort optional" night (5 points, 1-5 shooting, 1 rebound, 1 assist) even before he left the game with a groin injury, and Johnson "broke out of his shooting slump" by hitting 8-of-21 from the field and 1-of-5 from beyond the arc (yes, he was shooting worse than that before). And despite the thrill of victory, Johnson was pissed that his team played like a bunch of confused special education children: "It's got to stop sooner or later, man. I honestly thought this was a 25-30 point win for us tonight."

Minnesota Timberwolves: When the book on this season is written, it will read "The Timberwolves couldn't protect a 1-point lead with 2.2 seconds left aganst the Atlanta Hawks." That, my friends, is how bad this team is.

Dallas Mavericks: Their shooting was off (41 percent) and they committed 18 turnovers. They also wasted a beauty from Dirk Nowitzki (32 points, 12 rebounds, 5 assists), who finally looked like an MVP again. But what I want to know is, what happened to the Mavericks' defense? The Nuggets, fresh off a tough homecourt loss to the Lakers, strolled into Dallas and scored 39 points in the first quarter...the most points the Mavs have given up in a single quarter this season, and the most points the Nuggets have scored in a single quarter this season. Furthermore, Denver shot over 50 percent for the game and committed only 7 turnovers (9 under their season average). Basically, the Nuggets did whatever they wanted to do, and Dallas was powerless to stop them.

Marv Albert and Mike Fratello: I usually really like listening to these guys during NBA broadcasts. They're funny, have great on-air chemistry, and they know the game. That said, they really made some stupid points last night. When discussing the Mavericks' relatively disappointing early-season record (then 12-7), Albert pointed out that Dallas started out 12-5 last season and then reeled off winning streaks of 13, 8, and 17 games. The inference, I guess, was that they can just do the same thing again this season, no biggie. Yeah, because 13 and 17-game winning streaks are easy to pull off. Later, Albert and Fratello discussed how Avery Johnson has realized that winning 67 games didn't mean anything after the Warriors upset the Mavericks in the playoffs, and that, as a consequence, Johnson isn't as concerned with winning games this season. Uhm, wha...?! Do they honestly think that The Little General doesn't want and expect his team to win every game? Like, what, he's letting the Mavs lose so the rest of the league gets overconfident? I guess Marv and Mike assume that the Mavs aren't playing well because they're conserving energy by not going all-out to win every game. Nice theory, guys, but totally wrong.

Miami Heat: Could this team get any more depressing to watch? Forget their awful record for a second. They have Shaq and Dwyane Wade. Those two guys have MVP trophies, Finals MVP trophies, and championship rings, so you'd think they'd be able to lead their team to a road win against a 6-12 team that had lost nine of its last 11 games, right? Wrong. The Heat lost their fourth straight game and fell to 4-14 on the season. And it's not like the Heat played a terrible game. They shot 51 percent as a team, won the rebounding battle, and limited their turnovers. Dwyane Wade just missed a triple double (21 points, 10 rebounds, 9 assists). Rookie Daequan Cook was a pleasant surprise with 20 points (9-11). But ultimately, the Heat couldnt overcome a younger, more passionate team down the stretch. They're bad on offense (currently 26th in Offensive Efficiency) and bad on defense (allowing 112.3 PPG in their last three games). I'm really starting to think Miami won't even make the playoffs this season. Mostly because of...

Shaq: Another sorry performance for the self-proclaimed Most Dominant Ever: 8 points (3-9), 7 missed freethrows (in 9 attempts), zero assists, 4 turnovers. Most telling, however, were the 5 personal fouls that limited him to 21 minutes of action. Shaq looks slow and terribly clumsy. He can't stay in front of people, and he can't move his feet. It's like his body just won't listen to his brain anymore. And the saddest and most pathetic moment came at the very beginning of the game, when Shaq made one of his signature awkward lurches to the basket and headbutted Joel Przybilla, then fell on him and drove the basketball into his face. Przybilla got knocked out of the game for a while, but he returned in the second quarter and did a good job containing Shaq when the big man was actually in the game. Yes, it's officially gotten to the point where Shaq can't overpower Joel Przybilla.

Quirky schedules: Denver versus Dallas looked like a great game on paper, but the Nuggets ran away with it at the end. Maimi versus Portland should have been a battle of The Legend (Shaq) against the New Kid on the Block (Greg Oden), instead it was Shaq against Joel Przybilla and a battle of two sub-.500 teams fighting for table scraps. The best game of the night turned out to be a contest of two of the league's worst teams (Minnesota and Atlanta) and it wasn't even televised.

Anonymous said...
I was watched the Mavs-Nugs game, I would not call that a beauty from Dirk... I would call it a beauty from Dirk through the first 3/4 of the game, he totally disappeared in the 4th, which happens to be exactly then Denver pulled away and it ended up not even being close.
12/07/2007 12:24 PM

Unknown said...
Josh Childress must have thought it was an "effort optional" night (5 points, 1-5 shooting, 1 rebound, 1 assist) even before he left the game with a groin injury

What do you think it was like to be in that draft room with the Hawks in 04?

"Whats that Bob? Who do we want to draft? Well, we already got Josh Childress, so lets get the other ugliest person available. They're both named Josh? Fantastic!"

Anonymous said...
Probably the worst collection of games ever on a single night.

P.S. Have you heard the rumor, Utah has the best PG-PF combo in the league!!! Check #1 "Projecting How the West Will Finish

Actually, they ARE putting up huge numbers right now, and have the record to back that up. But I'de take Nash/Amare AAAAAANNNNNNNNYYYYYYY day of the week.
12/07/2007 1:56 PM

Anonymous said...
Probably the worst collection of games ever on a single night.

P.S. Have you heard the rumor, Utah has the best PG-PF combo in the league!!! Check #1 "Projecting How the West Will Finish

Actually, they ARE putting up huge numbers right now, and have the record to back that up. But I'de take Nash/Amare AAAAAANNNNNNNNYYYYYYY day of the week.
12/07/2007 1:57 PM

You can have KneeSurgery Stoudemire, I was praying the Suns would trade him in the off season. I dont care what his upside is, Penny Hardaway looked great too and I was stoked for Backcourt-2000, but those dreams got flushed. I dont want to get stuck with another contract, cause I'm not sure Isaiah is dumb enough to help fix our team a third time.
12/07/2007 2:39 PM

Reef -- Yeah, you're right. But the sad thing is, I barely noticed because, at this point, I actually expect Dirk to disappear in the fourth quarter.

flohtingpoint -- I guess that gives the Hawks a 50 percent success rate in drafting guys named "Josh." Which, if you think about it, is the most success the Hawks have had at anything in the last 10 or 15 years.

starang -- Well, I'd take Nash over anybody one-for-one. However...Williams and Boozer are younger, bigger, and more physical, and they play better defense. Somebody needs to set up a 2-on-2 game so we can settle this. Or at the very least put out NBA Jam 2008 so we can run the matchup through the Bat Computer (I say the third teammates should be Matt Harpring and Boris Diaw).

floghtingpoint (again) -- Amare's fragile knees make me very, very nervous. It's like watching my grandma walk across an icy parking lot or something.

bob -- Seriously, dude. It's like everything that worked for the Mavs the last couple years just stopped working for no real reason. It's just odd. None of the players look totally comfortable with their roles on a game-to-game basis.
12/07/2007 3:39 PM

Anonymous said...
Call me back when either of them have back to back.......to back (sounds pretty) MVP's. My guess is, neither of them will.

Anonymous said...
Although last night game (which I attended) does not settle the dispute...I can notch one up for Steve/Amare over Williams/Boozer. What a monster game for The Matrix as well...26pts on 63% shooting, 15 reb, 5bs, 2stl. Monster game.
12/13/2007 8:42 AM
Post a Comment
<< Home
Subscribe
RSS Feed
Mailing List