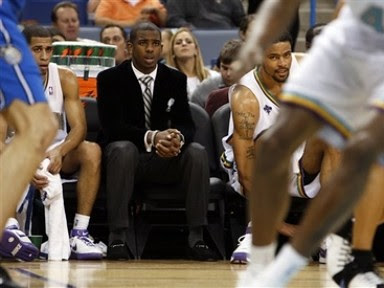 An injured Chris Paul watches in numb horror
as Jannero Pargo takes 21 shots in his place.

Portland Trailblazers: After two impressive homecourt wins against Dallas and Detroit, I wrote "I'm really excited about this Portland team." I must have stat cursed them or something, because the Blazers immediately lost their next four games by an average of 12 PPG, including last night's 101-92 loss to the Bobcats. Would Greg Oden have helped against the 'Cats? Well, let's put it this way: The Blazers got outrebounded 39-34 and their two big men -- LaMarcus Aldridge and Joel Przybilla -- combined for two rebounds and one blocked shot. Portland is now 0-7 on the road. Fortunately, they're about to start a four-game homestand that includes contests against the Nets, Kings, and Pacers.

Fun fact: The Knicks, Bucks, Hawks, Blazers, and Kings are a combined 0-25 on the road. If you're an NBA player and one of these teams comes to your town, you should be happy.

Kevin Durant: I know it seems like I'm giving this kid a hard time, but honestly, he's not playing very well. Last night he scored 11 points (on 2-8 shooting) to go along with 2 rebounds, 2 assists, and 5 turnovers. Through 12 games, Durant's averages are 19.0 PPG (37% FG, 28% 3PT), 4.2 RPG, 1.8 APG, and five games in which he scored 20 or more points. I couldn't help but compare those stats to Adam Morrison's numbers through 12 games last season: 16.2 PPG (39% FG, 38% 3PT), 3.1 RPG, 2.3 APG, and four games in which he scored 20 or more points. Durant's team, by the way, is 2-10 and Morrison's team was 3-9. My point? There's not a very wide statistical gulf between how the two of these guys performed during their first month in the NBA, yet the perception is totally different. By this point last season, Morrison was already being viciously criticized for his misguided shooting and inadequate rebounding. Yet Durant isn't taking nearly the heat Morrison did, probably because his scoring average is closer to the all-important 20-point gold standard and, frankly, the things he does look spectacular, even when he's doing them poorly. I dunno, just feels a little double standardy to me.


Fun fact: Eddy Curry has 5 assists and 19 turnovers this season.

New Orleans Hornets: As recently as yesterday, the Hornets had the best record in the Western Conference. Yes, you read that correctly. But after a 95-88 loss to the Magic, they dropped to fifth. Actually, the Hornets probably would have won this game if not for injuries: Chris Paul, their leading scorer and assist man, didn't play due to a sprained right ankle, and Tyson Chandler, their leading rebounder, left the game early due to a hyperextended knee. So if you think about it, the Hornets probably did well to keep the game as close as it was. Then why am I criticizing them? I guess because Jannero Pargo, who filled in for Paul, led the team with 21 shot attempts. That just seems wrong to me for some reason. I mean, if you're coaching the Hornets, do you ever want Jannero Pargo taking 21 shots?

New Jersey Nets: Jason Kidd wasn't happy going into this game, and you can be pretty sure he was even less happy afterward: He shot 1-9, committed 6 turnovers, and his team shot 35 percent en route to being routed by the Jazz, 102-75. The Nets are now 4-7, although, to be fair, they're playing without Vince Carter, who's "out indefinitely" with a sprained right ankle. Oh, who am I kidding? Vince Carter stopped caring about 1 second after he signed his contract extension. Actually, I doubt it even took that long. What's the smallest unit of time? An attosecond (one billionth of one billionth of a second) maybe? Or is it Planck time? Whatever, it doesn't matter. Kidd is pissed, Carter is apathetic, and the Nets' season will be ultimately meaningless.

Unknown said...
How bad was yesterday? Yesterday is a prime example of why basketball season is off to an extremely slow start, and is still getting beat out by MLB news on talk radio...

Lets take a look at the matchups:

-You have two brutally terrible teams going head to head twice (Blazers vs Bobcats and Sonics vs Griz), so you figure you should at least get one good game out of the battle of the futile... Right?

Well, one of the games was decent, Bobcats and Blazers (which sounds more like a fancy gay bar than a basketball game), with Raymond Felton begging the question of why he never gets mentioned in the same sentence as fellow draftmates Paul and Williams.

The other game, Sonics and Grizzlies, was just an excuse for a Casey Jacobsen sighting (followed by begging the question of why Memphis likes to cling on to Phoenix rejects)...

Side note: Comparing Kevin Durant to Adam Morrison is dead on. They both received ungodly amounts of press in college and during the draft, both have no idea how to crash the boards in the pro's, both are way too big for the position they should be playing (wait, does bench actually have a height preference) and both insist on launching up three after painful three while the spectators wince like they just began digesting a very spicy chimmy chonga...

-On the other side of the coin you have two teams that are equally matched and above average to good. The actual contests played were not so much... The Orlando/Hornets game was not nearly as close as the score depicts and the Utah game was a complete blowout.
11/20/2007 11:20 AM

Basketbawful said...
flohtingpoint -- I agree. Few things make me as happy as watching NBA games, but last night's games just kind of bummed me out. The one game I was really counting on -- Magic/Hornets -- was more or less ruined by the facat that Paul was out and Chandler went down. And watching the Jazz spank the Nets would have been a lot more fun if Half-Man, Half-A-Season had been playing.

And like I said, maybe I'm being too hard on Durant. Surely he's still in the "figuring it out" stage. But it also kind of feels like the kid has been given a free pass for aesthetic reasons. He just looks like a player, and his moves look pretty sweet. But his shot selection is piss poor and his fundamentals suck. I would be more forgiving of the bad shooting if he were taking better shots. I mean, Kirk Hinrich isn't shooting any better, but at least he's shooting solid, open shots. Durant's forcing things up, and how can you be yound and long and not crash the boards. He just seems too one-dimensional to me, kind of like a Rashard Lewis 2.0. (And that's only assuming that his offensive skills eventually eclipse Rashard's.)
11/20/2007 1:21 PM

djnumbers said...
How is basketball off to a slow start? what exactly would be the ideal start for you, flohtingpoint? everybody being undefeated? no one getting hurt?

first of all, offense is up league-wide. 11 teams are averaging 100+ points per game right now. that would be the opposite of slow. secondly, there are several teams with rising stars and improved rosters that are doing much better than they were in years past. These teams include charlotte, boston, indiana, utah, orlando, houston, new orleans, and toronto (and my Lakers). there are also the same great teams of the decade: spurs, mavs, pistons, and suns. Lebron has had some awesome games so far, denver is an exciting team, the east is improving, the knicks are amusingly incompetent, sean williams is blocking everything in sight, i can go on.

my point is either you like the league or you don't. there are always going to be bad teams and injured players in any sport. you can't enjoy something if you can only notice its faults.
11/20/2007 1:36 PM

Basketbawful said...
djnumbers -- Damn. I'm going to sound more wishywashy than a political candidate here. But I agree. I agreed with FP about yesterday's games, but I've been pretty happy with the start of the season so far. I mean, sure, the Bulls have been sucking and my Pacers still have Mike Dunleavy Jr. on their roster, but there have been a number of pleasant surprises, such as the play of the Magic, Hornets, and even the Bobcats.

The only thing we're missing is a good, hate-filled rivalry. I was kind of hoping Spurs/Suns would turn into a hatefest, but the teams probably have too many nice guys for that. How about we just have Bruce Bowen and Raja Bell slug it out, Celebrity Boxing-style?

However...while scoring is, in general, up, assist averages are down, turnover averages are up, and there are more teams shooting really badly than last year. Of course, it's early and a lot of teams are still working the bugs out. I'm just saying, there have been some great games and a number of bad ones too. However, I do kind of enjoy a blowout, as long as the team I'm rooting for is doing the blowing. Uh, the blowing out. Uh, you know what I mean.
11/20/2007 2:03 PM

Unknown said...
How is basketball off to a slow start? what exactly would be the ideal start for you, flohtingpoint? everybody being undefeated? no one getting hurt?

Ah, maybe I didn't explain properly. I'm not talking about the NBA in general, as far as teams/players/etc. I'm mainly talking about it's exposure and such. It feels like its slowly crawling back into existence on things like ESPN and sports radio. It is pretty frustrating when I flip on the ol AM stations and I have 30 minutes of "And A-ROD did this, and these people resigned with the Red Sox, and blah blah blah" and then have about 1.5 minutes of "Oh, by the way, in basketball some teams beat some other teams, thanks for listening!"
11/20/2007 2:27 PM

LooseChange said...
the insightful basketball discussions you guys are having is great and all, but how about this:

djnumbers said...
And I thought bears were rough lovers. anyway, the nba normally doesn't get much attention until january when college football is over and the nfl is in its playoffs. and what does espn and the radio have to do with the sport other than reporting (or not reporting) the news? i see where you're going fp. we bball fans just have to live with box scores, bland ap recaps, and short highlight reels until the media is ready to fully recognize that our favorite sport has begun its season. we don't need the media to help us enjoy the nba. don't forget, we've got blogs. channeling jesse jackson, keep hope! keep hope alive!
11/21/2007 10:32 AM
Post a Comment
<< Home
Subscribe
RSS Feed
Mailing List