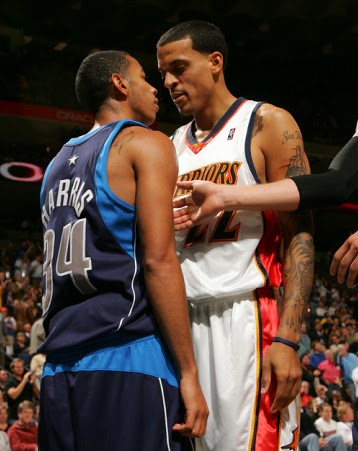 revenge game (ri-venj' gam) noun. A game in which a particular player or team has the opportunity to seek retribution for an injustice -- whether real or imagined -- that was committed against them by another player or team.

Word trivia: The NBA season lasts a long time, and most players have a hard time maintaining their competitive fire over the course of the 82-game grind. That's why revenge games are so important: They can get a player's juices flowing like nothing else. The player's sought-after revenge can be in response to any number of things. Maybe the other team won the last regular season meeting or knocked his team out of the playoffs the previous year. Maybe that team traded the player or tried to lowball him in salary negotiations, which prompted him to sign with another team. Or maybe an opposing player or coach just badmouthed him to the press. Here are some of the most commen revenge game themes:

1. The "See what you lost" game: Whenever someone leaves a team -- whether by trade or through free agency -- that player can't wait to get a shot at his former team. Putting up big numbers and/or coming away with a win serves as proof that the team was wrong, even foolish, to let him go. When the Lakers traded Shaq to the Heat, Shaq had two straight "See what you lost" seasons, the second of which culminated in a championship, and the Lakers are still trying to recover. 'Nuff said.

2. The "See what you left behind" game: Every team wants to believe they were right to trade a player or let him walk. So they want to shut that guy down and/or beat his team to prove that point. When Horace Grant left the Bulls in '94, he really wanted to stick it to his former team. Sure enough, Grant's Orlando Magic won the regular season series against the Bulls 3-1 and then defeated Chicago in the Eastern Conference Semifinals 4-2. Of course, the Bulls swept the Magic out of the playoffs the next season, then Shaq bolted for L.A., and Grant and Penny Hardaway were beset by injuries...but for that one season, Grant got a little payback.


3. The "Playoff payback" game: No team wants to be eliminated from the playoffs, so it becomes very important to come back the next season and beat the team that knocked you out as often as possible. And if by some miracle of fate you get matched up against them in the playoffs the next year, well, turning the tables on them would be Nirvana.

4. The "I hate you, you hate me, let's do this" game: Some players and/or teams just hate each other, and that hatred bubbles over whenever they meet. The Celtics and 76ers despised each other in the early to mid-80s, and that hatred led to fights between Larry Bird and Marc Iavaroni and later Bird and Dr. J. The 80s Celtics and Lakers didn't get along very well either; just ask Kurt Rambis, who got clotheslined by Kevin McHale, or Michael Cooper, who got hipchecked into the crowd by Bird, or Cedric Maxwell, who got slammed into a basket support by James Worthy, etc. Ditto with the 80s Celtics and Pistons: Bill Laimbeer clotheslined Bird to the ground, Bird threw a ball at Laimbeer's face, and Robert Parish once beat Laimbeer to the ground. Man, when you look back on the things that happened, the 80s Celtics sure look like a bunch of dicks.

Sadly, David Stern has managed to neuter most of today's players -- leading to ridiculous occurences such as players getting suspended for standing up off their bench -- so we aren't treated to wonderful canned hatred of yesteryear. But as long as we have the Ron Artests and Stephen Jacksons of the world, there's a good chance you'll get to see the random scuffle break out every now and then.

5. The "Don't tug on Superman's cape" game: Never embarrass a superstar. They don't like that. On March 20, 1993, the Washington Bullets' LaBradford Smith scored 37 points against a strangely defenseless Michael Jordan. Jordan was furious (even though the Bulls won) and vows to score 37 in the first half the next time he's matched up against Smith (which, as fate would have it, was the very next night). Jordan came close: He scored 36 in the first half -- and 47 in the game -- as the Bulls blew out the Bullets.

That's a great story, but I like this one better. It's from Jack McCallum's book Unfinished Business. Prior to a February 15, 1991 game against the Boston Celtics, the Lakers' Vlade Divac called L.A.'s previous game against Boston an "exhibition" and further suggested that the Celtics couldn't compete with the Lakers. When informed of Divac's less-than-favorable opinions, Robert Parish simply said, "Well, fuck Vlade Divac." Then, as McCallum put it, the Chief went out and did just that, scoring 21 points in the first quarter and sending Divac straight to the bench. Parish finished with 29 points (13-16), 10 rebounds, and 2 blocked shots in a 98-85 Celtics win.

6. The "You dirty rotten bastard" game: Every once in a while, a player or team screws another player or team over so badly that they can never, ever be forgiven. Like when Vince Carter was sandbagging so the Raptors would trade him, then transformed back into an All-Star literally overnight after he became a Net. The Heat/Lakers games had the "You dirty rotten bastard" vibe after we all found out that Kobe Bryant told police that Shaq paid off his mistresses. Sadly, Shaq and Kobe buried the hatchet last season and are all buddy-buddy again.

Labels: revenge, Word of the Day

Anonymous said...
It could be argued that last night's game featured five out of your six themes:

Anonymous said...
So since Dallas beat Golden State that pretty much makes them even, right?

Anonymous said...
I remember watching that Celtics/Lakers game where Parish torched Divac. I didn't know the background, but I do remember thinking, "what the hell is up with Parish?"

Also, that Bird/Dr.J fight was brought on by some trash talking by Bird. I can't remember where I read this, but apparently Bird was having one of his hot shooting nights and he told Dr. J that if he (Dr. J) didn't start defending him (Bird), then he (Bird) would have 40 points by halftime. That send Dr. J over the edge and they went at it.
11/13/2007 5:26 PM

Basketbawful said...
alexandra -- If you didn't laugh your ass off for the rest of the day...I will break you.

anonymous -- I know! I just couldn't find a "If he dies, he dies" graphic.

anonymous 2 -- Yes, Parish did in fact score 21 in a quarter. He also once ate four Big Macs before a game.

liston -- Dallas would have to grind all the Warriors, and Jason Richardson, into hamburger meat for them to be "even."

80s NBA -- You know, reports are mixed on the Bird / Dr. J fight. Dr. J has never said what prompted the fight. Bird, in his autobiography, claimed he never said a word to Dr. J. Ainge claims that by the midpoint of the third quarter -- by which time Bird had scored 42 points on 17-23 shooting -- that Larry started saying things to the Doc like "42 to 6" ('cause J had 6 points on 3-13) and "If you can't guard me, you should just retire." We know from the video that the Doc elbowed Larry hard enough to knock him down (it wasn't a flop, trust me) and then Larry chased him downcourt, threw an elbow of his own, and then all hell broke loose.

Here's one thing I can promise you. I doubt Bird was talking trash to Dr. J without provocation. That's not to say J was being as vicious as Bird, but I'm sure he must have said something to incite Larry...because Larry respected the Doc too much to trash talk him for no reason.