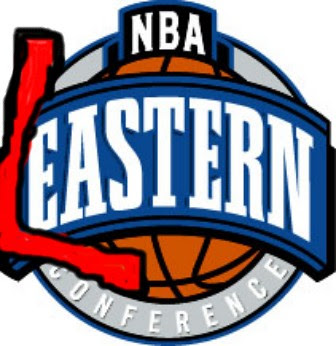 When I was just a wee tot, my mom taught me that if you don't have anything nice to say, you shouldn't say anything at all. Then, after almost 20 years of silence, she begged me to start talking again. Which is great, because I have a lot of not-so-nice things to say about the NBA's Eastern Conference.

Atlanta Hawks: I have never forgiven the Hawks for trading Dominique Wilkins to the Clippers in '94. And neither has God. That's like sending your favorite grandfather to the nursing home where they serve cat food and administer nightly beatings. Some people might think that the last decade worth of losing seasons was enough of a punishment, but I don't. And neither does God.

Charlotte Bobcats: This is a promising team with a lot of young talent, but I don't think they can overcome season-ending injuries to Sean May and Adam Morrison. And that should tell you pretty much all you need to know about the Bobcats.

Chicago Bulls: Speaking of promising teams with a lot of young talent. Thanks to the continuing development of the core group (Luol Deng, Kirk Hinrich, Ben Gordon) and the additions of Joakim Noah and Joe Smith, the Bulls should be even better this year. But even though this team should win 50+ games and will win a playoff series or two, I just can't see them making it to the Finals without a go-to guy or a low-post scorer.

Cleveland Cavaliers: Sasha Pavlovic and Anderson Varejao are still holding out. Look, I know the Cavs got to be the Spurs' hors d'oeuvres in the NBA Finals last year, but when the ultimate fate of your team comes down to guys like Pavlovic and Varejao...well, I think it's safe to say Cleveland won't be making a return trip to the Finals.

Detroit Pistons: These guys are like the NBA equivalent of a horror-movie killer: They never go away. Why, Pistons? Why won't you go away?

Indiana Pacers: With the additions of Travis Diener and Stanko Barac to a team that already featured Jeff Foster, Mike Dunleavy Jr., and Troy Murphy, the Pacers are whiter than ever. That might not be good for wins, but thanks to white privilege at least a couple of these guys should make the All-Star Team or win an MVP, right?

Miami Heat: Pat Riley pulled off a total coup by unloading Antoine Walker's rotting corpse (8.5 PPG, 4.3 RPG, 39 percent shooting) and a couple nobodies for Ricky Davis (17.0 PPG, 3.9 RPG, 4.8 APG) and Mark Blount (12.3 PPG, 6.2 RPG, 50 percent shooting). But think about that: If your team is radically improved by the acquisition of Davis and Blount, you're in big trouble.

Orlando Magic: I still can't believe the Magic signed Rashard Lewis to a $118 million contract. Unless the Magic know something about Lewis nobody else knows -- like the fact that a single drop of his sweat grants eternal life -- they're paying about $60 million more than they should be. And outside of Dwight Howard, the rest of the Magic's roster is just kind of sad.

Milwaukee Bucks: You know, that Yi Jianlian hasn't looked half-bad in the preseason. He even had a 15 point, 12 rebound night against the Timberwolves. But he's no Wang Zhizhi. Need I say more?

New Jersey Nets: Will Vince Carter's new $61.8 million contract inspire him to improve his game? Did Jason Kidd spend the summer working on his jumpshot? Can Richard Jefferson finally stay healthy enough to finally fulfill his potential and justify the $78 million contract he signed in 2004? The answers to these questions are: No, no, and no. That should make the answer to "Are the Nets contenders?" pretty self-evident.

New York Knicks: I won't be able to take this team seriously while Isiah Thomas is still the GM and coach. Until that situation changes, they're doomed, and anybody who says differently should be punched in the face.

Philadelphia 76ers: In non-basketball related news, did you see Brian Griese lead the Bears on a last-minute, 97-yard touchdown drive to beat the Eagles last Sunday? Not Bob Griese, Brian Griese. The is the same guy who injured himself by tripping on a driveway (because it was "too steep") and then later injured himself falling down a flight of stairs (because his dog ran down the stairs and "clipped" him). This of course came a few weeks after the Eagles' quarterback, Donovan McNabb got sacked 12 times, probably because he's black, and black quarterbacks get criticized more than white quarterbacks. Or something like that. Anyway, the Eagles are 2-4 and I really doubt the 76ers are going to do much better. I just feel so sorry for Philidelphia sports fans. Seriously.

Toronto Raptors: I must be slipping, because I don't have a single bad thing to say about this team. I mean, other than that they overpaid for Jason Kapono. And that they haven't sorted out their point guard issues. And nobody on that team can play defense. And they can't really score on the inside. Other than that, they're solid.

Washington Wizards: The Wizards biggest offseason "moves" were surgeries for Gilbert Arenas (knee) and Etan Thomas (heart). Thomas is out for the season and Arenas has shot 29 percent (15-of-51) in five preseason games. So, you know, if you live in Washington, I wouldn't suggest getting your hopes up.

In an interview this morning, Kevin McHale and Randy Wittman flat-out said that they made the trade simply to free up PT for their younger players. McHale said about the trade, "It opens up playing time. They were two veterans that were going to play and we're going to go young. The first-round pick, we're stockpiling a lot of first-round picks, so that was an important part. Walker's got two years on his deal, Blount has three on his deal, so you save a year on that. Doleac and Simien are both done this year. So, it was a financial deal in some aspects, but more than anything else it was for the first-round pick and allowing our young guys to develop."

So, in a way, McHale is kind of saying that Walker was more-or-less a throw-in with the conditional 1st-round pick (It's incredible how far that guy has fallen, I remember when people were saying he was going to be the next great). I guess this marks the end of the NBA's possibly greatest era, "The 'Toine Era," please say it isn't so. No more jacking up low-percentage 3's, struggles with the "calorie cap", no more...well I don't really know what else. Finally this is what Wittman says about Walker (he talks as if Walker's almost ready to retire), "It's hard to say right now, until he we get him in here and he plays with guys. I know in the past he's had the ability to create mismatches because of his style of play. He's not a post-up player; he's a spacer that at the four spot can space the floor. He can play some three or had been able to. Again, we've already crossed another year that I need to see him and where he's at physically and whether he can do that."

Basketbawful said...
I hate him, too. And the words "Antoine Walker, NBA Champion" have kept me awake every night since June of 2006. Dirk Nowitzki's greatest crime against humanity may be the fact that he allowed that to happen.
10/25/2007 11:22 AM

ChrisH said...
that's the funny thing though, as unlovable as walker is/was it was tough to root for the mavs that series with Cuban on their side.

Anonymous said...
Although they'll probably be circling the proverbial toilet bowl all season, the Knicks may just be the most entertaining team to watch this year, if only to watch Isiah slowly go from frustrated to suicidal. Seeing his reaction last night as Eddie Curry picked up foul after foul after foul was priceless.

If the Zucker brothers (of "Airplane" fame) scripted life, Isiah would have pulled out a pistol and started playing russian roulette.
10/25/2007 6:09 PM

Drake said...
I'm pretty sure the owner stipulated in Rashard's contract, "You are contractually obligated take me out to dinner at a nice restaurant sometime, and the meal must cost at least $60."
10/26/2007 5:58 PM
Post a Comment
<< Home
Subscribe
RSS Feed
Mailing List