matador defense (mat'-uh-dor' de'-fens) noun. A lackluster, low-effort form of defense in which the defender simply reaches for the ball and then quickly pulls his hand away -- similar to how a matador pulls his cape out of the way of a charging bull -- as the offensive player drives by him for an easy shot at the hoop.

Word History: The term "matador defense" was coined by Chick Hearn, the Lakers' legendary play-by-play man. Hearn revolutionized color commentary with his rapid fire, staccato broadcasting style and is credited with creating many of basketball's most well-known and enduring phrases. Some of the most famous Chick-isms include "slam dunk," and "air ball."

Word Examples: The Lakers pretty much sucked last season. A lot of people think it's because Kobe didn't have enough scoring support. That couldn't be further from the truth. The Lakers were actually the fifth best scoring team in the league last season, and the sixth best shooting team. Their real problem was defense, where they were sixth worst. Naturally, there are multiple examples of their matador defensive style on YouTube. Here are three:


Great Matadors in History: Tito Santana. 'Nuff said. And hey, you can book Tito for autograph sessions, wrestling clinics, or pumping your gas at the local BP. Seriously. Go here. 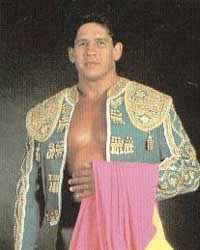 You didn't think I'd miss the chance to
include a picture of Tito Santana did you?

Anonymous said...
You can't get enough of the Lakers failing at basketball...and Chico Santana.

Basketbawful said...
anonymous -- Yeah, it's a repost. I usually don't do that on WotD's, but I happened to do a search for "matador defense" on YouTube and found those clips. It was like...God Himself wanted me to mock the Lakers. You can't say no to God.

josh -- Tito rocked. And yeah, he's currently teaching Spanish and owns a hair salon (not sure if he actually does the hair cutting, though; he probably hired Brutus Beefcake to do that).
8/17/2007 12:55 PM

Anonymous said...
There was a youtube video that was sadly taken down, where someone went on a "Search for Tito Santana". He found him in his barber shop, got his autograph, and a haircut from him.

How awesome would it be? I mean, even if he gave you the worst haircut ever...

"Dude, who gave you that ugly haircut?"

Chico is one of the most underrated wrestlers of all time. His matches with Greg Valentine were awesome.

Brutus Beefcake is a sad shell of his former self...have you heard the cocaine story from 2003? Beefcake was doing work in a subway, and someone called the police because they thought they saw anthrax on a ticket booth table. And the police are there and Beefcake goes "That's not anthrax, that's my cocaine!".
8/17/2007 1:35 PM

Basketbawful said...
josh -- That's pretty much how it'd go, even if he made me look like Moe Howard. And you're right: he was vastly underrated. Probably because he never found the right gimmick.

Anonymous said...
the best part about this article was reading the Brutus tribute and finding out that Hulkamania is a "powerful cultural movement". and, um, as long as we're talking about Brutus I'd like to interject a little Rowdy Roddy Piper into the mix - remember when he teamed up with the Barber to beat the crap out of Adrian Adonis? good times, man, good times. also Roddy seems like one of the only surviving famous 80s-90s wrestlers whose life isn't a total f***ing mess.

also, at least two of those clips have as much to do with Nash-wizardry as they do terrible defense. especially the third one - I mean, a behind the back look in the paint while on the move? sure, luke walton is an atrocious defender but I think most guys would struggle to stop that. I'm not denying that the Lakers were awful on defense but would it be possible to get a clip or two of Nash's attempted "defense" as well? seriously, that dude is all about swiping at opposing pgs as they blow by him. oh, and taking fake charges.
8/17/2007 2:14 PM

djnumbers said...
you nailed it with the lakers. i know as a laker hater it gave you joy to post disparaging material against them, but it's completely true. if it wasn't for that damn idiot kwame brown and the king matador, smush parker, the defense would be at least average. it's not looking good next season either. ugh...
8/17/2007 2:28 PM

Trev said...
Usually when we play pick up ball there is a lot of matadore defense played. It's usually pointed out with a very loud "Olé" however this weekend when we get together it is definatly going to be replaced with a "Nice defense Tito" which I'm sure will draw a lot of blank stares but I really don't care because it's funny to me and that's all that matters really.
8/17/2007 3:17 PM

Basketbawful said...
padraig -- Hulkamania is more than just a powerful cultural movement. It's a communicable disease. I caught an incurable case of Hulkamania around '84, '85, and I kid you not...I have "Real American" on my iPod right now. And I totally, totally agree about Roddy. That dude is ALL OUT OF BUBBLEGUM.

djnumbers -- Yeah, I hate the Lakers. But at this point, it's not as fun as it used to be. I'm not outdueling the high school quarterback anymore, I'm picking on the special ed kids. But my point, as you say, is valid. They were a very good offensive team and terrible on defense. Sadly, defense is less about talent and more about effort, intelligence, and concentration. They could have been so much better.

slowchild25 -- You know, I started writing an extra section about matador defense in pickup ball but didn't have time to finish it. You're right: pickup basketball is full of matador defenders. Like someone once said, "It's the first team to 11 points, not 11 steals." I'm going to say "Nice defense, Tito" too, at the first opportunity. We'll both be laughing...but yeah, it'll just be the two of us.
8/17/2007 3:50 PM

Anonymous said...
In EA Sports NBA Live 07 Steve Kerr, the video game color commentator, says in one of the recorded voice overs that he played "matador defense" so that he could get to the other end of the court as fast as he could to jack up a three.

Marv Albert, the video game play by play man, then comments that Steve is on "truth serum" (which video game Steve thinks is very funny) and then video game Marv tells Steve that he likes to wear women's underwear.

OK, that last part isn't true. I'm only pointing this out because it allows me to also point out that Marv Albert and Steve Kerr even have good chemistry in a video game, and also to point out that the Lakers - who suck ass - have clearly been playing too much NBA Live 07 instead of practicing the triangle offense and violating chamber maids like they should be.
8/20/2007 10:23 PM
Post a Comment
<< Home
Subscribe
RSS Feed
Mailing List