bargument (bar'-gyoo-muhnt) noun. A heated debate about any basketball-related subject* that erupts under the influence of alcohol. These discussions usually take place in a sports bar or tavern, but they can also occur at a restaraunt, private residence, or even online. The only prerequisites are 1) alcohol and 2) at least two passionate basketball fans.

Usage Example: I recently participated in one such bargument over who was the greatest basketball player over the last 10 years. [From Introducing Liston.]

Word Trivia: My most memorable bargument happened a few years ago when me and Statbuster were visiting one of my old college hangouts. The debate centered around who we'd choose first -- out of anyone in NBA history -- if we were building a team from scratch. He chose Shaq, and I chose Larry Bird. I fully admit there was a certain amount of sentiment involved; given the opportunity, I'd probably amend my choice to either Magic Johnson or Tim Duncan. But I digress. Statbuster's argument, and it was a valid one, was that it's always easier to build a team around a dominant big man. My argument was less about Bird's relative talents and more about Shaq's flaws as a player; he uses the entire season to get into shape, always misses at least 20 games, has a miserable freethrow touch, and can't be counted on in the clutch. The argument got pretty ugly, and we were both pissed when we finally went to bed (i.e., passed out) at our buddy Dave's house. Once I had a clear head, I had to concede that he's probably right. And anyway, there's more evidence to support his point, since Shaq has made it to the Finals as the centerpiece of three entirely different teams...and won titles with two of them.

Sample Barguments: Here are some sample subjects for you to use next time you want to have a bargument. Who's more valuable, Steve Nash or Kobe Bryant? Did Karl Malone really steal the 1997 MVP from Michael Jordan? Could the 1995-96 Bulls beat the 1985-86 Boston Celtics or 1986-87 Los Angeles Lakers? Was Game 6 of the 2002 Western Conference Finals the biggest hose job of all time? Who was more dominant, Shaq or Wilt? Is Kobe more like Michael Jordan or Pete Maravich? Who's the best point guard of all time? Would Bird have won without McHale, Magic without Kareem, or Michael without Scottie? Who was the greatest scorer of all time? Did Larry Bird have a better mustache than Adam Morrison? Etc.

* Okay, barguments can be about any subject, basketball or otherwise. 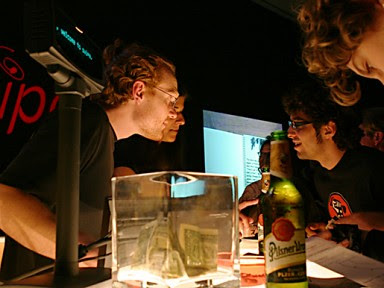 "I'm telling you, Jerome James is the best player from
Florida Agricultural and Mechanical University..."