Well, Kobe trade rumors are flying around again today, with prognosticators saying he could most likely end up with the Bulls. While this would no doubt be a boon to the commercial profitability of the Bulls and to new Kobe jersey sales, the Bulls shouldn’t do it.

We all know what the Bulls would have to give up to get him - Ben Gordon and Luol Deng. While Gordon has been quietly - and sometimes not-so-quietly - considered very tradable (he’s undersized and overhyped), Luol Deng, by contrast, is the future of the Bulls – even more so than Kobe could ever be, even more so than Elton Brand ever might have been.

Am I saying that Deng's upside is better than Kobe’s? Within the context of this team, you bet. This is an unselfish group that plays more like the Spurs than the Cavs, and to introduce a far-more-selfish-than-LeBron-has-ever-been player like Kobe will upset the apple cart. Not to mention that we all just saw how Spurs-style team ball easily trumped Cavs-style LeBron ball in the Finals.

Deng is unflappable, unselfish and a future all-star. He was fantastic against the Heat in the playoffs and showed plenty of spirit against the Pistons. This Bulls team, as it stands, is very close to being the best in the East. With another year of experience, they are poised to be better than the Pistons and the Cavaliers. Note to John Paxson: if you decide to dramatically alter this current chemistry, you had better be right. The Bulls are already an exciting, dynamic, crowd-drawing, playoff-calibre team. If you mess with that just to get a superstar name on the roster, you had better be right that it will produce a winner.

Possible exception: If you can manage to get Kobe while keeping Deng – perhaps with a Ben Gordon / Ben Wallace or Tyrus Thomas / draft picks trade – then consider it. But only consider it. Getting Kobe is not a no-brainer. Even if you keep the critical pieces of the team in tact, and retain enough talent and positive attitudes to maybe offset Kobe's monster ego, introducing a player-slash-personality like Kobe is a complete team makeover. This is a guy who Phil Jackson and Shaq had a tough time handling; you seriously expect Scott Skiles to keep him in line? Granted, Skiles is a bulldog, and I wouldn't want to meet him in a dark alley without a kickass set of Chinese throwing stars, but he doesn't have Kobe-cred. Kobe would, by default, be more powerful than the coach, and that is a disaster waiting to happen. It's already a disaster for the Lakers, but they wouldn't admit it for a second. Don't be surprised if they take just a little bit less than you might expect to get rid of the cancer that is Kobe Bryant.

All in all, keeping the status quo would be wise for the Bulls. They are on the verge of turning a very big corner as a team, and the best move by John Paxson would be no move at all. Unless, of course, he LIKES cancer. 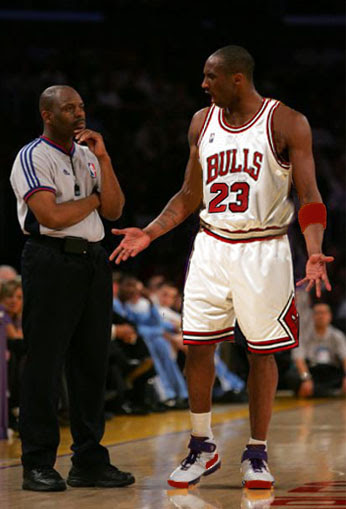 Secondly, its blogs like these that make Kobe anything but a cancer for the Lakers or any other team he goes to. While its debatable whether he is going to help you win championships (I think he would), what is not at all debatable is that from a business perspective taking on Kobe is a 'layup.'

Think about it, if he comes and you -do- win a championship, you make enormous amounts of money. If he comes and you -don't- win a championship, the ensuing Kobe saga will draw almost as much publicity. Not to mention win or lose he'll draw the crowds like noone since Jordan. I can't see how as a team owner I -wouldn't- want this guy...
6/17/2007 1:44 PM

Anonymous said...
the bulls have enough perimeter players- what they really need is an interior player that can score. simple as that.

Anonymous said...
I disagree. The Bulls are terrible. They would not have even defeated miami if Wade was healthy.
They are disciplined but extremely mediocre and inconsistent. This is not a title team.
Getting Kobe is an option but it really depends who they have to give up and in any case it does not solve the biggest problem - no post play.
6/17/2007 3:44 PM

Anonymous said...
Anonymous 1: I don't understand how "blogs like these" make Kobe "anything but a cancer." Just because he has tongues wagging doesn't have anything to do with the effect he has on a team. I don't see him doing anything positive for the Lakers other than scoring a lot of points in losses, and griping childishly off the court. It's not remotely debatable as to whether he will win a team championships. He alone will not. He alone HAS not done anything for the Lakers. Mark my words, he will never go deep into the playoffs as the star of the show (he must have an all-time great like Shaq at his side - of course, even Wade appears to need that).

Anonymous 2 has the idea: KG and Kobe are a potential championship tandem, but even then, neither has shown enough propensity for winning on their own for me to really think the two could do any real damage come playoff time.

At his best, Kobe Bryant is MJ without the ability to distribute the ball or consistently take over a game. He is more than stoppable when matched with a quality defender. At his worst, Kobe Bryant is Vince Carter with Terrell Owens' attitude. If you can't see how a team owner wouldn't want this guy, you're not trying hard enough.

There's no question Kobe draws a crowd, win or lose, but I have no interest in watching a playoff dropout play night in and night out to full stadiums.

Jerusalem Joe: This Bulls team is on the rise. They are young, break well, can stop offensive big men with Ben Wallace (who, granted, is less than useless on the offensive end) and if Luol Deng develops as he is developing, he will be the post scoring presence the Bulls need.

On the other hand, I found myself turning to the great Basketbawful himself during Game 2 of the Bulls/Heat series and saying "This team, with these players, should NOT be this good." He wholeheartedly agreed. So yes, there are valid reasons to think that the Bulls are not poised to do better next year. We shall see.
6/17/2007 4:47 PM

Chris said...
Love the blog, but your inner hatred for kobe has got the best of you here. Deng/Gordon for Kobe - NO QUESTION. Gordon is a small, inconsistent shooting guard that will never be the primary option for a championship-calibre team. Deng is great - huge upside, but you have to count on improvement there.

Kobe is one of the best players in the league. You REQUIRE allstar(s) to win championships - remind me, who from chicago was on the all-star team? If you have the opportunity to get a top player and keep the majority of your team intact - DO IT.
6/18/2007 7:17 AM

Anonymous said...
I'm counting on the improvement from Deng. You said it yourself, huge upside.

Inner hatred isn't sparking this one at all. I genuinely think Kobe is too much of a destructive force on the personality side, particularly to a young team like the Bulls.

As a Celtics fan, I (and all of Boston) always despised Bill Laimbeer back in the day, but there was always an underlying feeling that if he were ever traded to the Celtics, I (and all of Boston) would have loved the hell out of him. I can move between love and hate for a player on a dime, and I have no particular trepidation about enjoying, and even loving, Kobe playing on "my" team. I imagine I'd be damn excited to see him go to Celtics, for example, but of course, I'd be excited to see any talent at all on the Celtics.

It's no secret that Gordon is tradable. He's undersized - particularly for the Rips and Chaunceys of the world - and not as good as everyone thinks he is. Sadly, I think the league is slowly realizing that, and his value drops daily as the hype fades, but packaged right, the Bulls could - and should - pick up a bigger shooting guard.

Word of the Day
Previous Posts
The Misery and the Dynasty
Time to start taking the Spurs seriously
Cheer up, Cleveland
If you can't draw a foul, draw something.
Notes on a Game
Eric Snow will not save the day.
Game 2: Crap
Pregnant women playing hoops
Game 1: The Roar that Moused
NBA Finals Preview: The Roar vs. the Bore