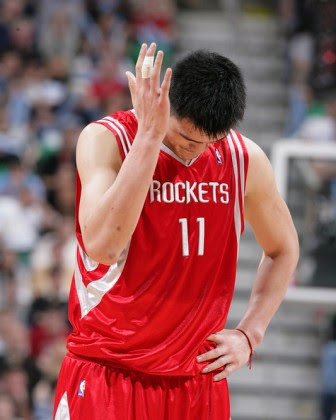 Lenovo Stat is a new plus/minus statistic that compares the point differential when players are both in and out of the game to determine how a team performs with various combinations, thus demonstrating [dramatic drum roll here] "the power of teamwork." According to this new measure, the Houston Rockets featured the most effective five man player combination during the 2006-07 NBA season. The Rockets' line-up of Yao Ming, Tracy McGrady, Rafer Alston, Shane Battier, and Chuck Hayes led the Lenovo Stat rankings (+269), enjoying a significant lead over the second-best five man unit comprised of Dallas' Dirk Nowitzki, Jason Terry, Josh Howard, Erick Dampier, and Devin Harris (+215). The Phoenix Suns combination of Steve Nash, Shawn Marion, Amare Stoudemire, Raja Bell, and Leandro Barbosa came in a distant third (+165).

Something must be seriously wrong with this statistic, though, because only four of those five Rocket players managed to score in Houston's horrifying 81-67 Game 3 loss to the Utah Jazz. In fact, only four Houston players scored, period. Let me repeat that for dramatic effect: only four Rockets scored in last night's game. Yao Ming (26), Tracy McGrady (24), Shane Battier (11), and Rafer Alston (6) did all the "scoring" while their teammates did all the sucking. Although, maybe that's not a fair statement since only three other Rockets even attempted a shot: Juwan Howard (0-5), Luther Head (0-5), and Chuck Hayes (0-2). No, on second thought, they all sucked about equally. Only the ancient corpse of Dikembe Mutumbo -- who played only five minutes and couldn't score by himself in an empty gym full of 5-foot baskets -- is off the hook.

Overall, the Rockets shot 32 percent from the field and had 19 turnovers. The Rockets' bench went 0-for-10 and didn't score a single point (to go along with six rebounds and zero assists). The team's 67 points were the fewest in Rockets playoff history. And it was the only time in NBA playoff history that a mere four players on one team scored. It was a performance so spectacularly bad, so truly vomit-inducing, that David Stern should retroactively take away one or both of the Rockets' victories in this series. Look, I'm not trying to say that scoring is the only meaningful statistic, but last time I checked, the NBA was still using points to determine who wins and loses.


Now that something this sucktastic has finally happened, is anybody surprised that it was presided over by Jeff Van Gundy, the doleful mastermind of many a joyless "75-71"-type victory while coaching the Knicks in the late 90s? Somehow, despite the fact that it's 2007, despite the fact that David Stern has changed the very rules of the game to increase scoring, Van Gundy still manages to preside over 1990s basketball, which was actually just 1950s basketball in a taller, faster, more muscular package. I know Jeff has won a lot of games that way, but then again, barbarians used to win a lot of battles by chopping off the heads of their enemies and then hanging them from trees to induce a sense of fear and awe. I guess what I'm trying to say is that sometimes the ends don't really justify the means. 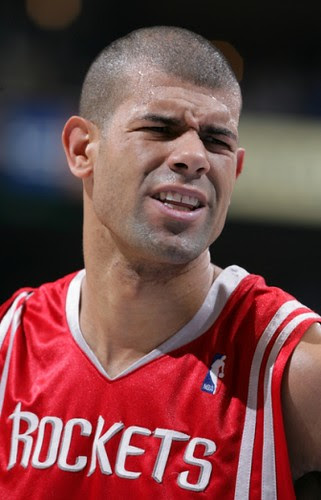 Anonymous said...
An interesting fact unrelated to this post:

If the Bulls win game 4, Shaq will have been swept out of the playoffs for the sixth time of his career (7, if you count Detroit's "5 Game Sweep" of the Lakers a few years ago ... as I do).

In fact, until the Lakers won the whole thing in 2000, Shaq's teams had only won one single game in all the series in which they were eliminated (in 1997, they lost to Utah 4-1 in round 2).

I wonder where he ranks on the all-time swept list. I'd guess behind a couple guys who played during Bill Russell's 13 year stranglehold on the league, but that's about it.

Anonymous said...
I just checked wikipedia, and, partly because of the lack of teams making the playoffs each year, the Celtics only managed 2 sweeps during Bill's tenure.

Word of the Day
Previous Posts
The Pacers: "We suck. Don't leave us."
It's official: James Posey sucks.
Word of the Day: Game 1-itis
An apology to coach Mike D'Antoni
Bulls/Heat: Game 1 Recap
The Bulls have no chance against the Heat (and her...
The Top 5 First Round Playoff Flops
Backboard:1 Kid:0
Wade and Lebron are the new Larry and Michael
Happy birthday Lew Alcindor